There were new faces and familiar ones at the U.S. Pizza Team’s Winter Trials at NAPICS. - PMQ Pizza Magazine 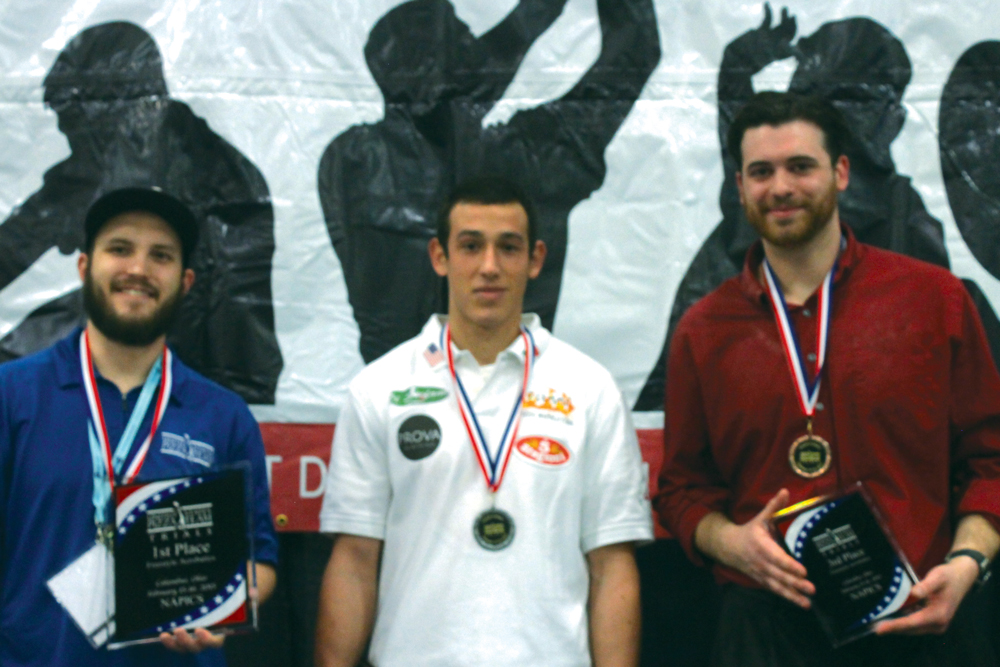 There were new faces and familiar ones at the U.S. Pizza Team’s annual Winter Acrobatic Trials, held at the North America Pizza & Ice Cream Show (NAPICS) earlier this year in Columbus, Ohio. Veteran dough spinner Bradley Johnson of Mellow Mushroom (mellowmushroom.com) in Chattanooga walked away with the grand prize, but some newbies also stepped in to make a big impression on the judges and the crowd in the competition, demonstrating that the USPT continues to grow and thrive.

In the Freestyle Acrobatics event, Johnson, who has been honing his dough spinning skills for years, dazzled the judges to capture first place. For his outstanding performance, Johnson earned a free trip to Parma, Italy, to compete with the USPT in the World Pizza Championship this month. Meanwhile, a pair of talented newcomers arrived on the scene to make Johnson work harder for the prize. Placing second was first-time competitor Scott Volpe, owner of the Fiamme Pizza Napoletana food truck in Tucson, Arizona, while Jacob Bens of Ramundo’s Pizzeria (ramundospizzeria.com) in Cincinnati claimed third place. (Ramundo’s has been hailed by Cincinnati Magazine as having the “Best Pizza Sauce in the City.”)

Competitors were also tested on a variety of skills, including Largest Dough Stretch, Fastest Pie Maker and Fastest Box Folder. In the Largest Dough Stretch contest, Johnson again stole the show, recording a stretch of 32”. Another veteran competitor, Dave Sommers of Mad Mushroom (madmushroom.com) in West Lafayette, Indiana, came in a close second with 31”. David Whisker of the Boyne City, Michigan, location of B.C. Pizza (bcpizza.com) rounded out the top three with a stretch of 27.5”.

Grabbing the gold for his first time, Rick Wheeler of Mad Mushroom in Lafayette, Indiana, was named Fastest Pizza Maker with a score of 1.2167 minutes. This was another hard-fought category, with Bradley Johnson finishing second with 1.2189 minutes. Whisker captured third place with his time of 1.28 minutes.

Finally, Kyle Hambley of Samosky’s Homestyle Pizzeria (samoskyshomestylepizza.com), located in Valley City, Ohio, took the gold in the Fastest Box Folder contest with a time of 20.91 seconds. Whisker, who medaled in three categories this year, captured second place with 24.77 seconds, and Sommers took home third prize with a time of 25.87 seconds.

Pizzathletes like Johnson, Wheeler and Hambley weren’t the only hard-charging competitors at this year’s NAPICS event. More than 110 pizza masters from around the country descended on the Columbus show for the 2015 Pizza Pizzazz culinary competition. The first-place winner in each category won a cash prize of $6,000, while second-place winners received $1,000 and third-place winners pocketed $500 for their culinary talents.

At Bexley Pizza Plus (bexleypizzaplus.com) in Bexley, Ohio, every employee is cross-trained to be a pizza chef. One of the best-known is Brad Rocco, a competition veteran and this year’s winner in the Traditional category. Rocco wowed the judges with a pizza featuring sausage, portabella mushroom, spicy pepperoni, bell pepper and cheese. He has won at Pizza Pizzazz twice before—in 2003 and 2006—and competed with the U.S. Pizza Team in Italy both years.

Coming in second in the Traditional category was Lisa Early, owner of Brenz Pizza Co. (brenzpizzaco.com), a favorite among college students and locals alike in Knoxville, Tennessee. Early won $1,000 for the ATM (All the Meat), a red-sauce pie loaded with pepperoni, ham, sausage, capicola, bacon and cheese. Finally, longtime pizza making competitor David Smith II, owner of Pizza Palace Plus (pizzapalaceplus.com) in Emporium, Pennsylvania, made his presence felt with his third-place finisher, the Traditional Meateater. A carnivore’s dream come true, this red-sauce pizza blended pepperoni, ham, bacon, salami and sausage with mozzarella and provolone cheeses.

Just as respected pizza makers flocked to the Pizza Pizzazz competition, NAPICS 2015 also drew thousands of pizzeria and ice cream shop owners and operators from across the country to see, taste and touch the latest industry wares, foods and beverages from more than 175 exhibitors. Additionally, workshops and seminars drew nearly 900 attendees to learn more about marketing and managing their businesses and maximizing revenue.

NAPICS organizers are already working on the 2016 event, to be held January 24 to 25 at the Greater Columbus Convention Center in Columbus, and the U.S. Pizza Team will be there again to host next year’s Winter Acrobatic Trials.

The U.S. Pizza Team consists of expert pizza makers and dough spinning acrobatic performers from pizza restaurants across the United States. The squad competes regularly in the World Pizza Championship, held every spring in Italy. In the 2014 global event, USPT member Jamie Culliton won second place in the Individual Freestyle category. In 2011, the U.S. Pizza Team won first place in the Team Acrobatics competition at the same event.