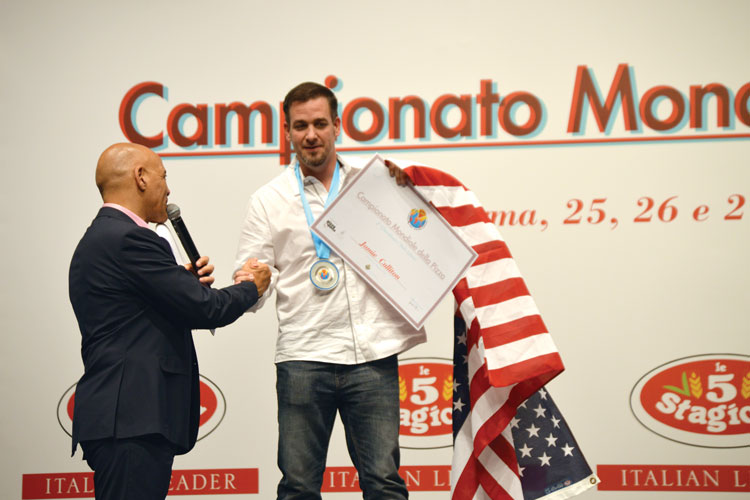 In a way, we’ve got Jim Carrey to thank for the U.S. Pizza Team (USPT). Without the famous actor’s star power, the 1994 comedy Dumb and Dumber probably never would have made it to theaters. And without Dumb and Dumber, the hilariously lowbrow tale of two dimwits trying to return a suitcase of money to a beautiful stranger, Steve Green, PMQ Pizza Magazine’s much smarter publisher, may have never hit upon his idea for a national team of competitive dough spinners and pizza chefs.

“There was a scene in Dumb and Dumber that featured the appearance of the Swedish Bikini Team,” Green recalls. “It was a half-funny and half-plausible name that begged the question: If the Swedes can have a bikini team, why can’t the Americans have a pizza team?”

Ciccone puts the finishing touches on a culinary masterpiece.

OK, so Jim Carrey gets some of the credit, and some goes to a bevy of blondes in bathing suits. Regardless, Green was on to something. And 15 years after he assembled the first U.S. Pizza Team to compete in the World Pizza Championship (WPC) in Italy, the squad is still growing and racking up victories and fame, with member Jamie Culliton claiming his second WPC silver medal this year for acrobatic dough spinning.

Although it would make a better story if this bunch had started out as the archetypal plucky but hapless bunch of losers who stumbled their way to success against all odds, the USPT was never a Bad News Bears kind of club. Since its inception in 2000, it has been producing winners—a lot of winners—from repeat gold medalist Tony Gemignani, who competed with the team for years before venturing out on his own, to the squad that won the WPC’s Team Acrobatics category in Salsomaggiore, Italy, in 2011. In honor of the team’s 15th anniversary, we asked Green and former PMQ editor-in-chief Tom Boyles (now an account representative for the ad sales team) to look back and reflect on some of the highlights.

To be fair, Green had been mulling over the notion of a pizza team before he ever saw Dumb and Dumber. “We took a small group of people to the World Pizza Championship its first year,” he says. “As it started growing, I was feeling a team spirit evolving. At the time, there were no national teams there, but there was a lot of flag waving from individual members.”

For the 2000 event, Green put together his first “dream team,” consisting of Gemignani, Dino Ciccone and
Danny Wolfe. “I had written a story about Tony and his dough spinning history months earlier,” Green remembers. “He was the most talented dough spinner I could call to join me on our journey to Italy. Dino had won awards for the best pizza in both America and Canada in the same year. And Danny Wolfe used to fascinate me with stories of his days working in the White House as a chef cooking pizza for Ronald Reagan and George Bush. As it turned out, he didn’t actually ever work in the White House.”

Wolfe’s tall tales aside, Green’s instincts were largely right. “We were not expecting to win anything, since we were just three out of about 300 competitors,” he says. “But Tony tied for first place the first year and won first place alone the second year.”

Over time, the team began to grow, holding trials for new members and attracting corporate sponsors—the California Milk Advisory Board came on board first.
Before long, the national media took notice. “I think one of the first milestones was when the team caught the attention of the Food Network around 2003,” says Boyles, who accompanied the USPT on many international trips during his tenure. “They traveled with us to the WPC and aired a prime-time feature on their channel, which brought a massive amount of attention to the team and its members. Everyone on the team felt like true rock stars of the industry with the cameras filming their every move and the finished piece that was shown on TV.”

The Food Network special aired on March 21, 2004. Meanwhile, CNN had also covered the team’s performance at the 2003 WPC, and CBS’ The Early Show featured a USPT Trials event held in Columbus, Ohio, that same year. Gemignani showed off his moves to Jay Leno on The Tonight Show, and programs like NBC’s Today show and Fox Sports’ The Best Damn Sports Show Period also spotlighted the team that year.

But the annual trips to Italy weren’t just about stoking competitive spirit. “Another huge leap was when PMQ started organizing tours to places like the Parmigiano- Reggiano factories, Barilla’s main production facility, the Caputo flour mills, vineyards, Rome, Pisa and other places,” Boyles says. “I think this was when the team members started to take home some real knowledge of traditional Italian foods and methods that many incorporated into their menus back in the States.”

Meanwhile, the USPT kept winning at the World Pizza Championships. In 2004, Giorgio Giove took home the silver medal for the Pizza Classica, the event’s most prestigious culinary category, while Domino’s franchisee Brian Edler earned solid gold as the Fastest Pizza Maker (Edler set a new record at the time by making five pizzas in 37 seconds).

For a change of pace, the team traveled to Naples in 2007 for a different global competition, the International Pizza Championship, sponsored by Caputo and the
Associazione Pizzaiuoli Napoletani. The new venue didn’t affect the squad’s winning ways—the USPT grabbed the gold medal for the Team Acrobatics category that year, and member Juan Hermosillo captured the gold in the Largest Dough Stretch competition.

“I have personally seen how the competition, experiences in Italy and the overall team camaraderie have saved several pizzerias from going out of business."
-Tom Boyles, PMQ Sales Executive

Along the way, the team went on memorable excursions to famous Italian landmarks and partied in grand European style. Some side trips were strictly educational—touring a buffalo mozzarella factory, for example—while others took in the wonders of legendary cities like Venice and Naples. The 2007 trip took the team and guests far afield to Mt. Vesuvius and the ancient city of Pompeii, followed by a tour of Rome. “The architecture and history of the Coliseum, Caesar’s palace, the Vatican and all of the historical places we visited left me as awestruck as a little kid seeing the castle at Disney World for the first time,” Boyles says. “To actually climb the ancient tiled staircase inside the Leaning Tower of Pisa, stand on the top and feel it sway with the wind is a sensation I’ll never forget. Although, at the time, all I could think was, ‘Please, don’t let today be the day it falls.’”

The team enjoyed a banner year in 2008, earning more glory when member Chris Green taught a fumble-fingered Diane Sawyer how to spin dough on Good Morning America. Green’s teammate, John Howe, gave a demo in speedy pizza making that same year on Live! With Regis and Kelly, culminating in a frenzied scene that saw host Regis Philbin hurling dough balls at the cameras in the episode’s closing moments. And team member and culinary coach Chef Santo Bruno even taught Martha Stewart a thing or two about making pizza in a skillet.

Two years later, the USPT was selected to march—while spinning dough—in the 84th annual Macy’s Thanksgiving Day Parade in 2010. The squad went on to win the Team Acrobatics category at the WPC in Salsomaggiore the following year, and Culliton has earned two straight silver medals in Individual Acrobatics over the past two years.

In other words, after 15 years in action, the USPT still knows how to produce world champions. But, more importantly, many team members have also learned how to run more successful pizzerias. “I have personally seen how the competition, experiences in Italy and the overall team camaraderie have saved several pizzerias from going out of business,” Boyles notes. “Just being part of the team creates such a huge boost in publicity and brings in customers eager to try world-class pizza.”

For Green, the U.S. Pizza Team has never really been a moneymaking venture. It’s more about celebrating pizza and learning more about the craft and industry he loves so much. “It’s been an invaluable source for finding great new people and great stories to tell,” he says. “Going to the birthplace of pizza every year keeps us close to new ideas and products.”

Boyles and Green both see the team as an American delegation of pizza-bearing goodwill ambassadors. “I think each and every person who has been part of the team has been the best ambassador we could ever ask to represent us,” Boyles says.

And USPT membership helps drive these pizzaioli to bigger and better things. “Some that I met on the trips had only one store at the time and now have over 30,” Boyles adds. “Several have appeared on TV on the Food Network, CNN, Martha Stewart Living, the Travel Channel and more. While America doesn’t have an official pizza mascot, we do have these great people out there, representing the best of what American pizza has to offer.”