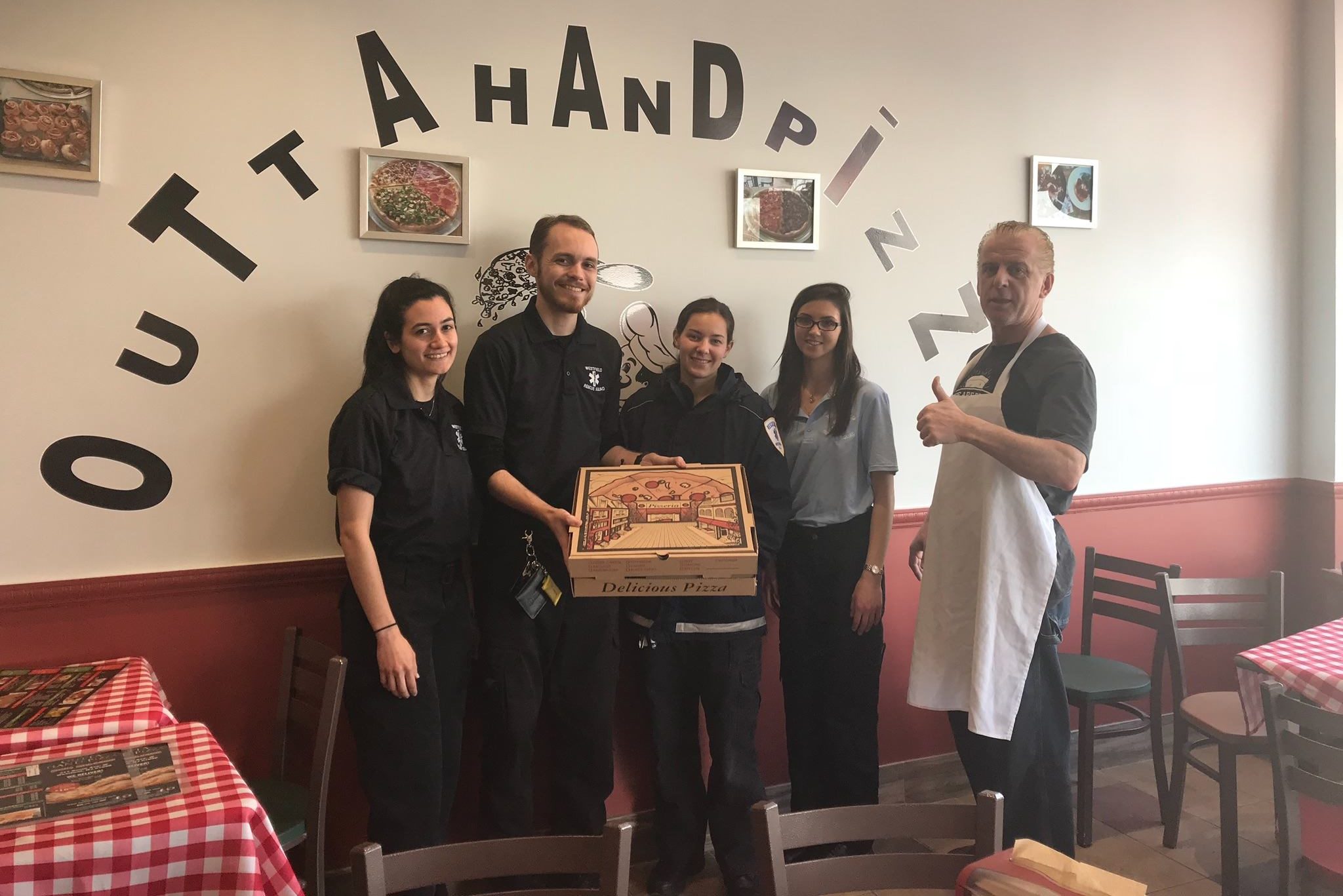 Owner Burim Regjaj poses with Westfield Volunteer Task Force, a group he provides monthly free meals to as a thank you for their service.

A Westfield, New Jersey pizzeria made national headlines when it broke the Guinness World Record on the largest Sicilian pizza made in the shape of the U.S. Flag.  But the 17-month old pizzeria has accomplished much more than that in its short time.

Owner Burim Regjaj opened Outta Hand Pizza on April 20, 2018, with his brother Bekim with whom he shares a background in pizza business having worked together on a family-owned pizzeria in Groton, Connecticut.

“The apt name Outta Hand Pizza was my niece Klodiana’s idea,” Regjaj said. “She imagined pizza in the air and ‘outta hand’ when it is twirled while being stretched. Since then, it remained.”

The pizzeria makes dough and sauce daily, using a decades-old recipe passed down through the family from their matriarch Nona Ija (pronounced: “Eeia”).

“We do believe we have a great-tasting pizza,” Regjaj said, “and this belief was proven true when we won ‘Best Pizza’ during the Westfield Pizza Palooza 2019.”

The owner’s favorite is plain pizza, because “only the plain slice tells the true quality of a pie.”

“If you enjoy a plain slice,” he said, “you can add favorite toppings only to personalize that great taste. We have many customers that recognize this principle and add most peculiar toppings: Burrata imported cheese, sauteed broccoli and tomatoes, anchovies, and calamari…”

He added that gluten-free pizza and gourmet pies are customers’ favorites as well.

Related: Patriotic Pizzeria Makes Guinness-Record Flag Out of a Pizza

“Great pizza means nothing without the customers and Westfielders were so supportive of us,” he said.

So Regjaj repaid that kindness in ways that impacted their community for the better.

“We believe that it is only fair to give back to the community especially after they do so much for us,” he said. “The stronger the community, the stronger we are to support it and give back even more. To show our appreciation, we do provide monthly free meals for the public sector employees of the town: the rescue squad, police department, fire department, and the public works department. They have become like family to us.”

Regjaj took the free meals one step further after a chance encounter with a customer left him emotional.

A customer had walked in one afternoon to order a slice of pizza, but he faltered on whether he could afford to add pepperoni to the slice.  The store manager offered to add pepperoni for free which made the customer joyous. As they talked further with the customer, they learned that he is a formerly homeless veteran working as a painter for a private residence so he could earn enough money to survive to the end of the month.

“Emotionally, I couldn’t bear to learn his struggles,” Regjaj said. “We offered him free food while he was working near the pizza shop. But, that was not enough. We decided to start a program to provide free meals for all local veterans.”

He expressed his concern for the veterans’ plight on a closed Facebook group for Westfield citizens and the community response was so great that the pizzeria was able to deliver 40 meals at a time to the Veterans Affairs housing on top of welcoming veterans to eat in the restaurant.

The program is now called “Prepay a Meal for a Vet,” where anyone can prepay $16 which the pizzeria matches 25 percent (or four dollars) to add up to a $20 meal. The veterans are invited to eat a free meal, and they are not restricted to a $20 budget per meal.

The prepaid meals didn’t end with the veterans. Regjaj then decided to give back even more to the community by inviting the customers to prepay meals for families struck by tragedies. For example, when the federal government was shut down, the pizzeria employees worked extra hours to uphold the pledge to provide at least two meals per family on furlough.  Regjaj said that like with the veterans the community kicked in to help with these families too.

Recently the owner broadened his caregiving actions to include the environment by replacing all single-use products with compostable items from straws to bags. The restaurant also raised the AC thermostat setting to 76 degrees.

“We do what we can to contribute to preserving the planet,” he said, “We are aware that we will not have a great impact but we hope to inspire other businesses to follow suit. ‘It takes a man a lifetime to move a mountain but it takes no time for many.’ If that saying is true, then we sure need many to step up and ‘bat for the planet.'”

Despite being just a little over a year old, the restaurant has become a community pillar through the owner’s efforts at giving back to the community that helped his business thrive. This scale of community involvement may keep the pizzeria around for many more years to come.