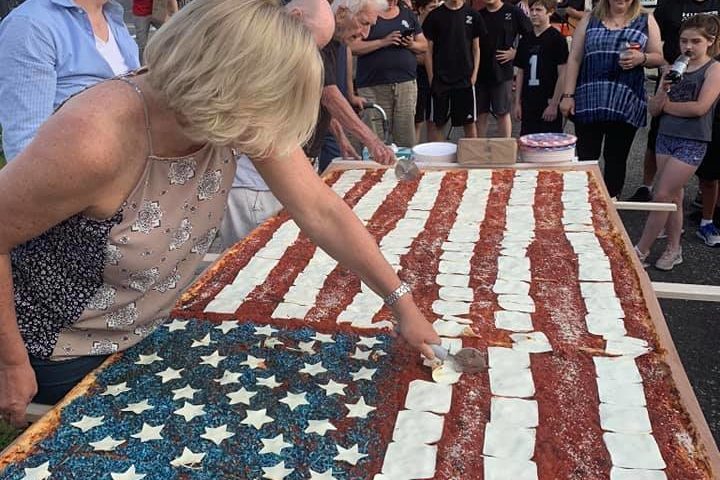 A pizzeria in Westfield, New Jersey has tackled the Guinness Book of World Records for the largest flag-shaped pizza this past Saturday.

The aptly-named Outta Hand Pizza created a Sicilian pizza measuring nine feet by four feet in the shape of the U.S. Star and Bars to kick off city’s Summer Movie Night event.  Pizzeria owner Burim Regjaj put the pie together at his restaurant before transporting it with a flashy police escort led by the city’s sheriff to the South Avenue Train Station to cook.

The mayor of Westfield, Shelley Brindle, live-streamed the historical moment on Facebook.

According to UPI, the pizzeria owner said the most difficult part of the flag pizza was figuring out how to do the blue sections. He said vegetables all appeared purple on the pizza, so they ended up using mozzarella dyed blue.

It took five gallons of sauce, three loaves of mozzarella and 14 to 16 hours to complete, said Burim Regjaj, the pizzeria’s owner. They estimated the cost of making the pizza was around $500 to $600.

Regjaj added that his U.S. Flag pizza is the largest Sicilian pie in the country as well as the sixth largest pizza worldwide. He submitted his claim to be verified by the Guinness Book of World Records.