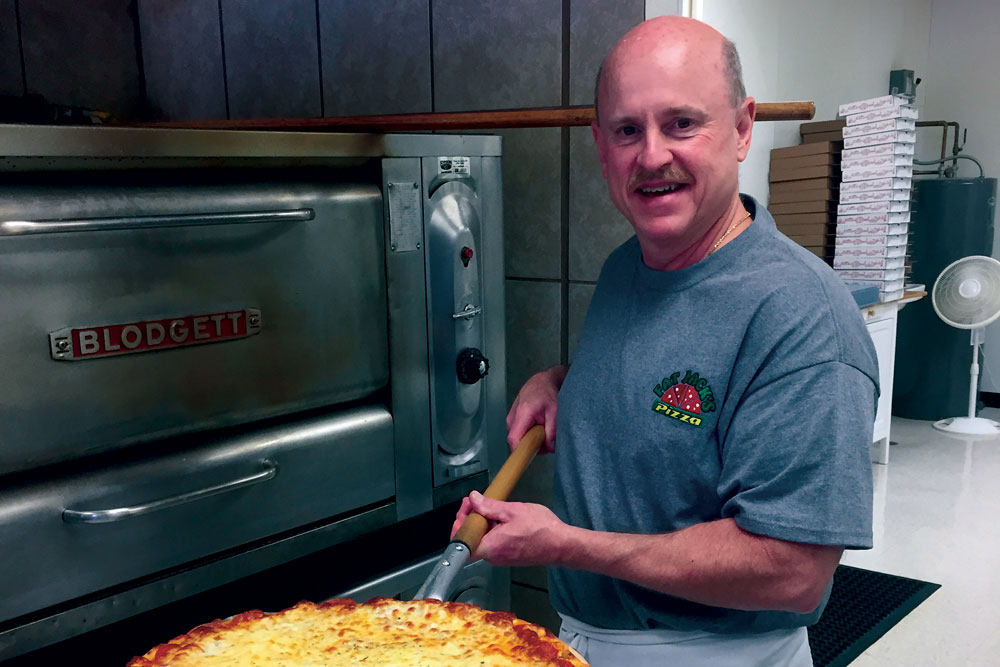 Never heard of the Quad Cities style of pizza? You don’t know what you’re missing. This pizza style features a generous dose of malt syrup in the crust, a heap of fennel-laced sausage and a sauce that’s spiked with red pepper flakes. Although several pizzaioli claim to have invented the style, unique to the Quad Cities region of Davenport and Bettendorf, Iowa, and Rock Island and Moline, Illinois, Mark Mannen, owner of Fat Jack’s Pizza in Peoria, Illinois, credits the innovation to a pair of Italian brothers named Frank and Tony Maniscalco. We asked Mannen how this Midwest favorite originated and what makes it so memorable.

PMQ: What exactly goes into the making of a Quad Cities-style pizza?

Mannen: We begin with our signature hand-tossed dough, which we make fresh daily, with a slightly sweet, malty flavor. Our sauce is made fresh with a unique blend of spices that add a rich, full-bodied, zesty taste. Then comes our crumbled, pure-pork sausage made fresh in-house and piled high. All of the ingredients are placed underneath a blanket of fresh mozzarella cheese. It’s a very top-heavy pie. After the pizza comes out of the stone deck oven, it’s scissor-cut into strips instead of slices.

PMQ: How did this style come about?

Mannen: I grew up in the Quad Cities with one of my best friends, Tony Maniscalco Jr. He was the son of Tony Maniscalco Sr., who came to the United States from Italy with his brother, Frank. They brought this style of pizza to the Quad Cities in the early 1950s. It was definitely their unique style, a longtime family recipe from Italy. Tony Sr. served the first Quad Cities-style pizza at the Paddock Club in Rock Island, Illinois, and Frank later opened Tony’s Pizza in Davenport, Iowa. Most people had no idea what pizza was at that time, unless they’d served overseas in World War II and visited Italy.

PMQ: How did you come to serve Quad Cities-style pizza at Fat Jack’s?

Mannen: Starting when I was 9 years old, Tony Jr. and I worked in the Maniscalcos’ restaurants on weekends and during summer vacations. We made $1 an hour and got to take a pizza home at the end of the evening. That was my baptism in the pizza business! After growing up in the business, I never really left. I worked as a manager of premiere hotels in Peoria for 20 years, then as a district manager for a local pizzeria chain. A man named Dick Kennedy had also worked for the Maniscalcos at the Paddock Club and later opened the Pizza Joint, in Milan, Illinois. After trying his pizza in 1995, I was hooked! My wife, Jean, and I wanted to bring to Peoria this very special pizza, one that we grew up with and loved. After a great deal of negotiation, I obtained the original recipes, and we opened Fat Jack’s in 2014, where we serve a true slice of pizza history and the best pizza in Peoria!

PMQ: Has the style spread to other areas?

Mannen: Outside this area, most people don’t know what it is. It’s a new phenomenon to them. But as you get closer to the Quad Cities—in places like Dubuque, Iowa—more people are aware of it. Right now I can safely say at least a dozen and a half pizzerias have taken this recipe and made it successful for their businesses. We’re even seeing people in Chicago going back to their roots and making Quad Cities-style pizza. But we’re the real McCoy, because my family was involved with the people who created it.

PMQ: Do you serve any pizzas in a different style?

Mannen: We offer a Canadian Bacon and Sauerkraut Pizza, where we put the kraut on top instead of cheese, which browns and releases sugars. We also offer a potato pizza—we use our homemade sausage and cheese mixed with crumbled tater tots, creating a unique flavor when the potatoes brown and crisp. People might initially come in here and wrinkle their noses when they see sauerkraut on our menu, but once you try it, you will be back!