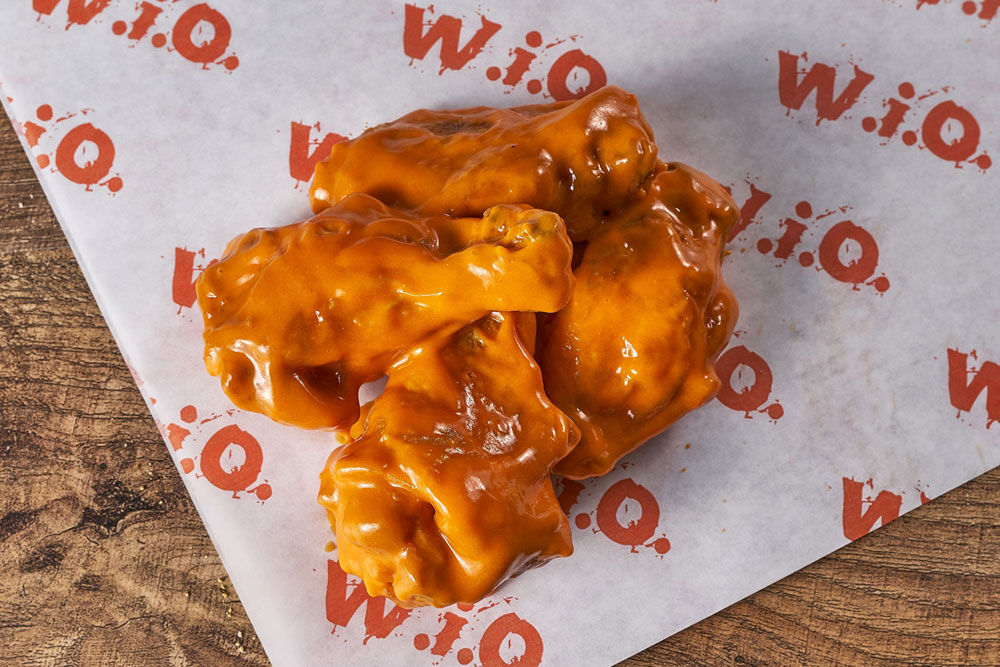 At Wing It On!, founder/CEO Matt Ensero manages higher costs with a whole-bird purchasing strategy.

Hard to believe, but pizza and wings weren’t always a no-brainer combination on pizzeria menus. Back in the late ’80s, Joe Todaro, a third-generation pizza man in Buffalo, New York, noticed that wings were a mainstay on menus in his own town, but pizzerias in other areas of the country were still woefully wingless. “We became known for our wings,” says Todaro, owner of La Nova Wings and two La Nova Pizzerias in Buffalo and Williamsville, New York. “But why were they not in every pizzeria in the country?”

Todaro brought the idea to his father, and after some convincing—over five years—La Nova started selling its wings and sauces to pizzerias in 1993. They were an instant hit, and within a year, Todaro recalls that Domino’s and Pizza Hut had jumped on the wing bandwagon. Today, pizza and wings create a dynamic duo that seems as natural as flour and water in pizzerias everywhere.

A Shortage Strikes
Fast-forward to 2022, and times are a bit trickier for operators who want to wing it. The continued booming demand for wings has led foodservice operators and consumers alike to experience a shortage amid the pandemic, leading to skyrocketing prices. “Consumers are seeing a 20% to 30% increase in prices of chicken at restaurants, while operators are absorbing a 200% increase in cost,” notes Matt Ensero, CEO and founder of Wing It On!, based in Raleigh, North Carolina, with nine locations and one food truck. “Although the cost increases may be temporary, the future of the shortage will depend on post-pandemic economic recovery and, more importantly, the availability of labor.”

Ensero notes that this shortage occurred because processing facilities do not have the labor to support the higher demands brought on during the pandemic. “Further compounding the issue is that while chicken wings are the most popular part of the bird, they make up only about 10% or less of the total bird weight,” Ensero adds. “This creates a supply-demand imbalance, whereas the incentive to increase production based on wing demand simply is not there.”

Related: For chicken lovers, bird is the word

On the positive side, even with rising costs, Todaro emphasizes that wings remain not only a profitable item, but a sales leader on pizzeria menus. Those numbers shoot up even higher during football season. “It’s been a challenge,” Todaro admits. “Prices are starting to go down a little bit, but we’re still paying a lot for wings—they’re now the most expensive part of the chicken. But the demand has not stopped, and I don’t see wings going anywhere.”

Press Your Cluck
If wings have become the holy grail of poultry, how can operators adapt to maximize their menu and profits? Ensero, as a chicken-focused concept, focused on two key levers to help the concept pivot during the shortage. First, menu changes helped. “We decided to get ahead of the shortage by working with our distributors to identify approved substitutes for typical wings—thus the introduction of our thigh wings in early 2021,” Ensero says. “We were one of the first chicken chains to introduce a thigh substitute, and other brands have followed suit.”

The second lever is the company’s “whole bird purchasing strategy,” using all parts of the chicken (except the leg). “This can be seen through our recent thigh wings launch, our boneless tenders, Nuggz items (from the tenderloin), and chicken sandwiches (breast meat),” Ensero notes. “This purchasing strategy keeps costs low. Since we’re buying the sections of the bird that may be lower in demand, suppliers are more excited to work with us on a program to sell us the high-demand pieces as well.”

Meanwhile, you can maximize wing sales through tactics from smart marketing to simplified prep. “Last year, we expanded our offerings of chicken sandwiches to include many unique varieties and backed this up with a ‘Wiches Wednesday’ promotion,” Ensero explains. “When we initially introduced substitutes like thigh wings and Nuggz, we did large, systemwide promotional campaigns for these, too.”

Ensero shares some other tactics that have worked wonders:

Meanwhile, Todaro advocates stretching your wings through savvy purchasing. “What we try to do is make wings easier—buying fully cooked, heat-and-eat wings helps you take a lot of labor out of the equation,” he says. “Premade sauces also help make prep easier for operators.”

Related: Stickin’ with chicken on your menu? Here’s how to sell more of it?

On the Sauce
Todaro recommends having a variety of sauces on hand in various spice levels, from hot to mild, to appeal to all palates, and notes that hot, barbecue and teriyaki flavors are top sellers. Ensero has also noticed that the combo of sweet and heat is trending—at Wing It On!, the Honey Heat sauce is maple honey blended with housemade buffalo sauce. “Another trend is ultra-hot wings, which lend themselves well for challenges to see if people can handle the heat,” Ensero adds. “We have Wings of Prey sauce, which can only be described as painfully delicious. Finally, Nashville hot is another flavor that’s been trending. We introduced our own take on Nashville hot sauce in March 2021 for our wings, tenders and a new sandwich. Fans have loved it.”

Don’t be afraid to think outside the sauce when it comes to flavoring your wings. Ensero believes 2021 might have been the year of the dry rub. “Not only are all six of our dry rubs gluten-free, but they also pack in a bunch of flavor with little mess,” he says. “Our Buff-a-Rub packs in the deliciousness of buffalo sauce without customers dirtying their hands and clothes.”

Regardless of what flavors you choose, don’t forget to cross-utilize your ingredients across the menu to further boost profits. At Wing It On!, the housemade Chipotle Ranch wing sauce is also used as the base for Smokin’ Ranch Slaw, as an ingredient in Loaded Street Corn, and as a dip for its Nuggz. “Offering different sauces, besides the typical buffalo or barbecue flavors, is another way to diversify your menu and give customers options,” Ensero notes. “Create something that is unique to your store and that they can’t find at the competitors for a true competitive advantage.”

Ultimately, Ensero believes that customers will always go where the wings are—and with pizza and wings being such an iconic combo, pizzerias should keep wings on the menu. “If profitability is an issue, consider raising your prices,” he says. “If the pandemic has shown us one thing, it’s that people are still willing to buy chicken wings, even at much higher prices.”