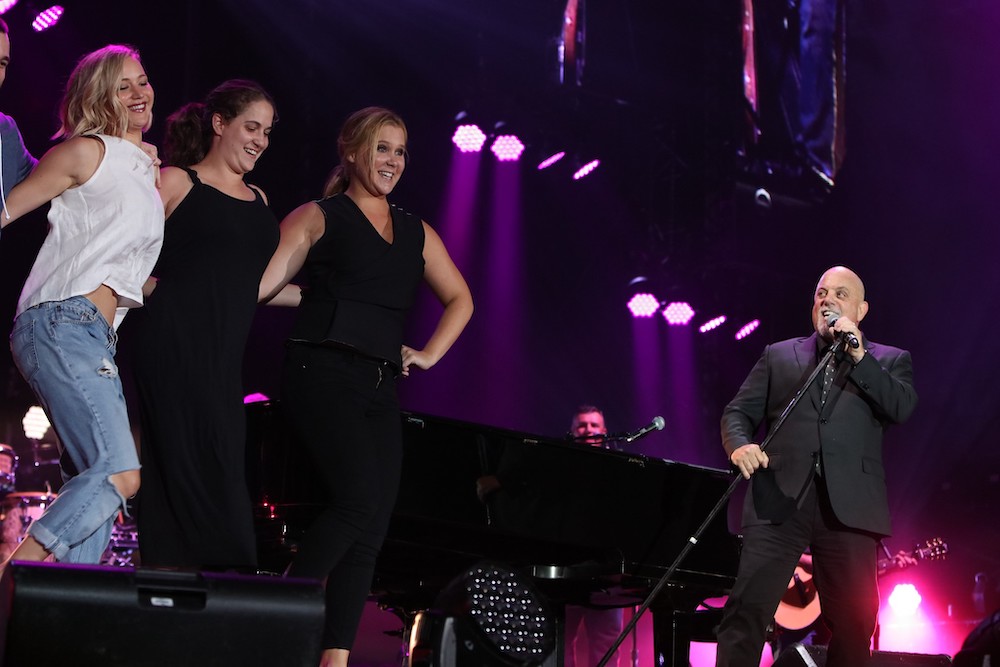 Jennifer Lawrence (left) and Amy Schumer (right) danced with a friend on the piano at a Billy Joel concert last fall.

Related: The pizza that Elvis couldn’t help falling in love with

In what will surely be a memorable scene from an Italian restaurant, DiMaggio’s Pizzeria in Hicksville, New York—the hometown of Billy Joel—will throw a centennial birthday bash for the rock star’s late mother, Rosalind Nyman Joel, on February 15.

According to Newday, a representative for Joel confirmed that the piano man and his mother often ate at DiMaggio’s in bygone days. Although Joel himself isn’t involved in the event, he told Newsday, “It’s OK with me. I wish them much success.”

The party will start not at 9 o’clock on a Saturday but at noon on a Tuesday. It will feature music, free food and open-mic memories and tributes, according to Sal Stile, the new owner of DiMaggio’s, known for its sesame seed-crust pies. Stile has even renamed one of his existing pizzas as The Roz in Rosalind’s honor.

Stile admitted he has heard conflicting reports about Rosalind’s favorite pizza. A friend of Joel’s told him she preferred a thick-crust pie with red peppers, while Joel’s rep said it was “usually a regular pie with a thin crust.” Taking no chances, Stile said, “We’ll make half and half.”

“There’ll be people speaking, the community sharing stories, an open forum—like a block party, like a street fair,” Stile said. “We’ll be giving free slices all day to people. Hey, it’s a celebration. What do you do in a celebration? You eat!”

DiMaggio’s is located in Hicksville’s Village Green, immortalized in Joel’s well-known tune, “Scenes from an Italian Restaurant.” But DiMaggio’s isn’t the actual restaurant Joel sings about in that song.

In an A&E special, Joel said the now-closed Fontana di Trevi in Manhattan was one of the eateries that inspired the song. In a separate interview on Sirius XM, Showbiz CheatSheet reports, Joel said he was also thinking about Benito Il, a Little Italy restaurant that he frequented.

At Benito Il, Joel said, a waiter approached his table and asked, “A bottle of white? A bottle of red? Perhaps a bottle of rosé instead?” Joel remembered that pitch and used it to open his song about two ex-lovers getting together for dinner and reminiscing about their youth.

“So many people have great memories of growing up and hanging out at the Village Green,” said Joseph Saladino, supervisor of the Town of Oyster Bay, which encompasses Hicksville. “It all comes together nicely to bring about a very special event to honor an incredible woman and one of our nation’s best artists, and to recognize his connection to all Long Islanders.”

Related: Can cutting pizzas into larger slices save labor costs?

Saladino said he will attend and speak at the event and has invited former members of Joel’s band, Richie Cannata and Liberty DeVitto, to join him.

Rosalind divorced Joel’s father, Howard, in 1957 and raised Billy, along with her adopted niece, as a single mom. She was actively involved in charities for animal advocacy and other causes before she died at the age of 92 in 2014. Joel’s song, “Rosalinda’s Eyes,” was reportedly written in her honor.