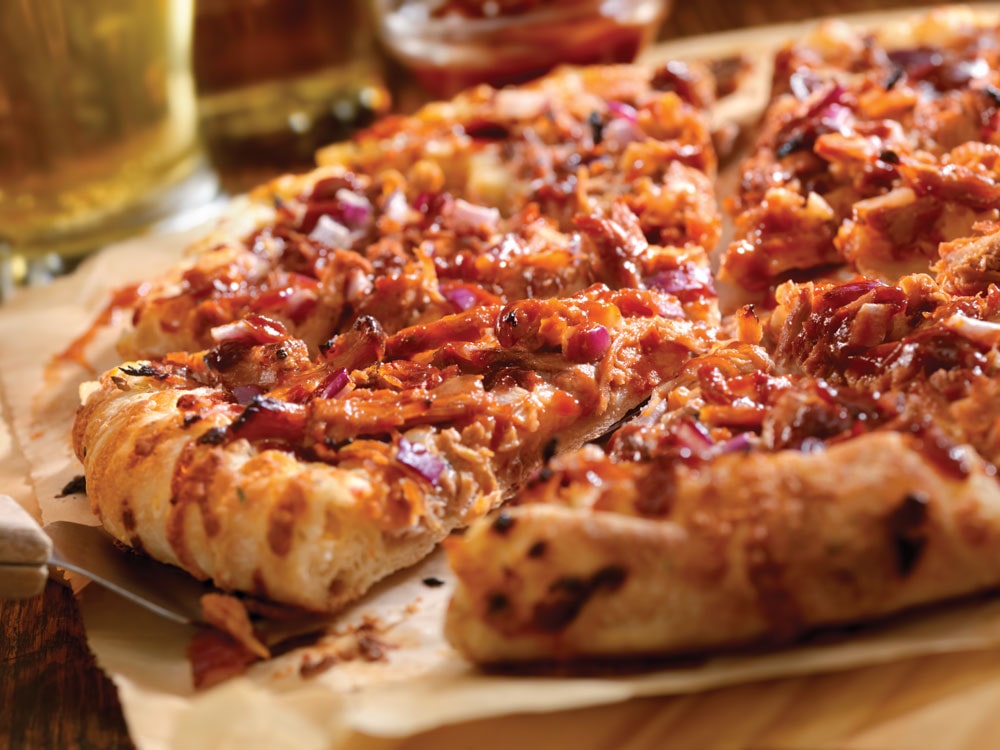 It’s the pie Elvis couldn’t help falling in love with. And since its creation in the 1950s, the barbecue pizza, typically featuring Southern-style, slow-roasted pulled pork or barbecued chicken, has slowly gained a foothold on menus around the country. It has become so popular that even Domino’s offers a version, called the Memphis BBQ Chicken pizza.

At first blush, topping a pizza with pork shoulder meat might sound crazy, but don’t tell that to Jerry Coletta, owner of Coletta’s Italian Restaurant in Memphis, Tennessee. After his dad, Horest, invented the barbecue pizza back in the early 1950s, the Coletta name would eventually become associated with one of the greatest icons of the 20th century—the king of rock and roll himself.

The story of this Southern-bred pizza style starts innocently enough: In the post-WWII days, Coletta says, there were no pizza joints to be found in Memphis. “We had a local naval base back then, and the sailors kept coming in and asking for pizza, which my dad didn’t have,” he recalls.

Since many war veterans had acquired a taste for pizza while serving in Italy, the food was beginning to catch on in other parts of the nation. To capitalize on the trend, Emil Coletta, Jerry’s grandfather and founder of Coletta’s, dispatched his son Horest (Jerry’s dad) to Chicago to learn the pizza making craft. When Horest returned, they added pizza as a menu item. “It didn’t go over well, though,” Coletta says. Aside from the local sailors, he explains, “most people didn’t know what pizza was back then. It was a new type of food. So, to stimulate interest in pizza, my dad came up with the idea of a barbecue pizza. It worked, because everyone knew what barbecue was. Even today, it remains one of our signature items.”

The barbecue pizza proved so innovative, it left the King of Rock-and-Roll himself all shook up. “One of our most famous customers was Elvis, back in the ’70s,” Coletta says. “[Presley and his entourage] would come in every week, bringing barbecue pizzas back to Graceland.”

To this day, fans from around the world regularly pop in to sit at Elvis’ table and peruse the memorabilia on the walls.

A Match Made in Heaven

Coletta’s follows a fairly simple method in preparing its barbecue pizza, starting with the main component: pulled pork. “We slow-cook the pork shoulders in an electric cooker for eight hours, then bone it out,” Coletta says. “We bake the pizza crust with the sauce and cheese on it first, and then, when it comes out of the oven, we put the cooked pork on it and drizzle more barbecue sauce on top.”

“We roast pork on a daily basis,” Galloway says. “We slow-roast it and pull it. And we make our apple-bourbon sauce with real bourbon. Everything we make is from scratch. We mix the sauce in with the pulled pork and put it on the pizza.” According to Galloway, his barbecue pizzas are consistently a hit with his customers. “I think that they are probably one of our top six sellers among our specialty pizzas,” Galloway says.

At Hard Knox Pizza in Knoxville, Tennessee, owner Alexa Sponcia sources his pork locally from Archer’s BBQ. Boasting a Memphis-style dry-rub, the pulled pork can be found on two of Sponcia’s pies—the Pulled Punch and the Barbed Wire. The Pulled Punch is also piled with cheddar and mozzarella cheeses and onions, while the Barbed Wire showcases smoked mozzarella, jalapeños and bacon, all finished with a homemade bourbon reduction.

Sponcia says her neo-Neapolitan baking style prevents the meat from drying out. “We put the pulled pork on the pizza before putting it in the oven,” she says. “We’re true wood-fired, so it takes about a minute to 90 seconds to cook, and the pulled pork still tastes juicy and great.

“These pizzas have been on the menu since before I bought the restaurant five years ago,” Sponcia adds. “We also do a monthly special called the Cuban Punch. We use pulled pork for that, so it’s like a Cuban sandwich on a pizza.”

Related: How to solve the problem of wet, sticky pizza dough

Sponcia says her pulled pork pies rank among her customers’ favorites, with the Barbed Wire edging out the Pulled Punch slightly. “People love pulled pork on their pizza,” she says. “It’s not super-heavy.”

Coletta agrees. “A lot of people say, ‘Barbecue on pizza, that doesn’t sound good. Pizza and barbecue don’t go together.’ I like to tell them that the marriage of barbecue and pizza is a match made in heaven.”