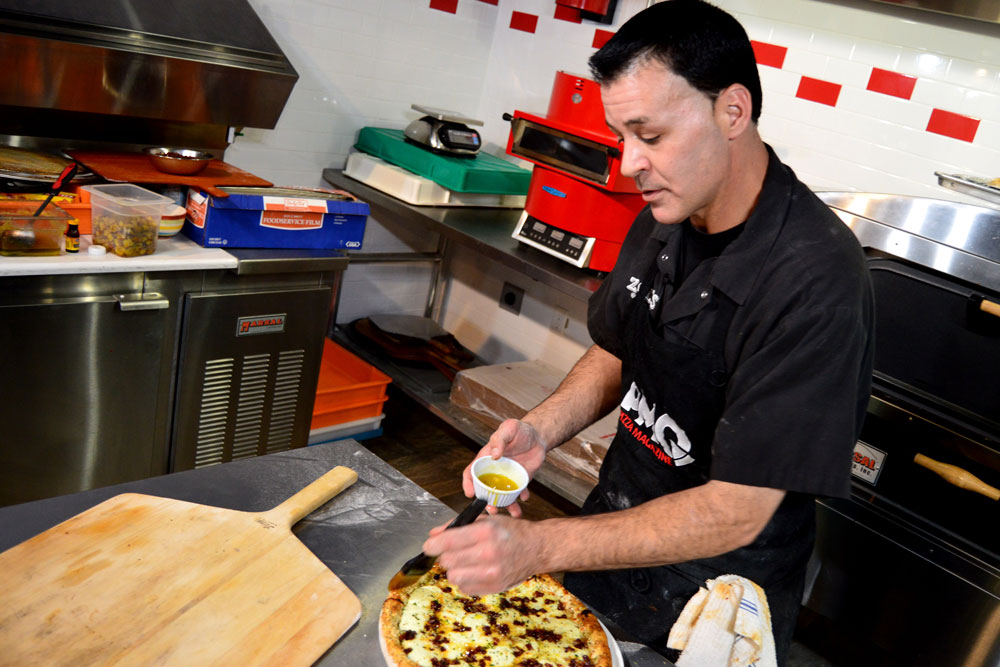 Ask movie buff Lee Hunzinger for his favorite film quote, and he’s quick with an answer, recalling a scene from Young Frankenstein in which a blind hermit tries to teach the monster how to smoke a cigar. “Fire is good, yes,” the hermit says, just before setting the slow-witted monster’s outstretched thumb aflame. “Fire is our friend.”

Fire has certainly been a friend to Hunzinger. And Hunzinger, currently a manager and pizzaiolo at the Fairview, Texas, location of Cane Rosso, has taken full advantage of the relationship. The Long Island, New York, native has been making pizzas since he was 15 and working with wood-fired ovens for the past 10 years. “A lot of people call me ‘chef’ now,” he says, with a modest shrug. “It’s a very respected profession, but I don’t think I really considered myself a chef for a very long time, probably about 25 years. I’m a pizzaiolo, first and foremost, but people can call me whatever they want.”

Here at PMQ, we just call him a genius. Hunzinger’s visit to PMQ headquarters last August created a company-wide sensation. As press deadline loomed and designed pages awaited final proofs, staff members dropped their pressing duties and piled into the test kitchen, fighting for a second slice of Lady Marmalade pizza or another helping of those drool-worthy Nutella rolls stuffed with vanilla mascarpone. And don’t even get us started on the amazing Meats Stromboli. “Lee showed up with a plethora of great recipes,” says Brian Hernandez, PMQ’s test chef. “I almost wish he hadn’t come to visit. His food was so spectacular that it really raised the bar of what the office expects from me!”

“I like to go just a little over the cutting edge and make things that most people aren’t making.”
—Lee Hunzinger, Cane Rosso

The Making of a Pizzaiolo

Until recently, Hunzinger served as head pizza maker at Zoli’s NY Pizza Tavern, touted by the Dallas Observer as the city’s “best pizza-by-the-slice joint.” The store closed due to problems with the building, but proprietor Jay Jerrier—who also owns all five Cane Rosso stores in the Dallas area—plans to reopen this fall at a new location. At Zoli’s, Hunzinger rocked guests’ taste buds with his fresh, sometimes audacious takes on New York-style pies, such as his Meatzilla, a 16-pound party monster stuffed with sliced meatballs, Italian sausage, hot soppressata and mozzarella and boasting a garlic-knot crust. Another specialty pie featured diced hot soppressata, pancetta,
rosemary-roasted potatoes, roasted Brussels sprouts, mushrooms and mozzarella.

“I don’t like to take someone else’s recipe and just add one thing to it so I can say, ‘Now it’s mine,’” Hunzinger says. “I like to go just a little over the cutting edge and make things that most people aren’t making.”

Despite his innovative ways, he started out like most pizzaioli, working in a family restaurant, Terry’s Pizza, which his parents founded when he was 13. (Don’t let Hunzinger’s German-Swiss surname fool you; his mother, Theresa, has Sicilian roots and instilled in her son a lifelong love of Italian food.) With the pizza-making fire now burning in his belly, he went on to work for a family friend, Joe Sciara, at Uncle Joe’s Pizza in the Hamptons. “Uncle Joe is 75 years old, and he’s still making pizza,” Hunzinger says. “He taught me about the heat of the oven, the hot spots, how the back corner spot is always hotter. He always told me to work neat, not fast. He taught me how to rotate the pizzas. More than that, he taught me about life in general, and the morals I have today, I trace back to Uncle Joe.”

Hunzinger later put in time at a Sbarro outpost and learned plenty there, too. “This was showing up in the morning and making 50 chicken rolls and 50 calzones and a spread of 20 different specialty pies, stuffed pizzas, things like that,” he recalls. “I picked up my speed, but I still tried to work neat and not make a mess all over the table.”

At 20, he was honing his chops at Relli’s Pizza Gourmet, another Long Island institution, making strombolis, veggie rolls and garlic knots. “With repetition, I got pretty good at it. I learned the best way to stretch the dough without getting thin spots and how to get a nice, even bake on the whole stromboli. Every once in a while, I’d try to talk them into doing something a little different, and they would let me, but they didn’t trust me yet at that age.”

“Lee’s stromboli is absolutely superb. We’ve had a lot of world-class chefs cook for us, and Lee is definitely among the greats when it comes to flavor.”
—Eric Summers, PMQ Art Director

Out for a Morning Stroll

Hunzinger eventually became head pizzaiolo at Mezzaluna Pizzeria in Palm Coast, Florida, until fellow New Yorker Vinny Ferrari hired him in 2008 to help open Ferrari’s Pizzeria in Plano, Texas. He was living in east Dallas when a morning stroll changed his life forever. “I was walking to a 7-11 to get a sandwich, and I see people making pizza with this wood-burning oven in a parking lot,” he says. “I thought it was a mirage or something. I’d never seen anything like that before.”

​Jerrier, a former New York financial whiz, had recently left Wall Street to pursue his passion: Neapolitan-style pizza. Before long, Hunzinger was helping Jerrier out with catering events; when Jerrier opened his first Cane Rosso location, a VPN-certified Neapolitan pizzeria without a hint of pretension, he brought the talented Hunzinger on board to learn from executive chef Dino Santonicola. “Dino has been making pizza for over 30 years,” Hunzinger says. “He’s from Naples and worked in one of the oldest, if not the oldest, pizzerias in Naples. He’s the man when it comes to wood-fired pizza.”

A star athlete in his youth who still rocks a Long Island accent, Hunzinger, like Jerrier, is a down-to-earth guy, but both pizzaioli can be snobs when it comes to choosing ingredients. Ordinary pepperoni simply won’t do—they use only a natural-casing pepperoni that curls into little juice-laden cups. “It cups up so well that all of the grease and flavor stays inside the cups and doesn’t run all over the pizza,” Hunzinger says. “It has a great, smoky flavor, and when it cooks longer, it actually gets crispy like bacon.”

But for the full Hunzinger experience, you’ve gotta try the soppressata—specifically, a variety of hot soppressata that he describes as “pepperoni on steroids.” This spicy Calabresian salami plays a featured role on many of his signature recipes, including his famous Meats Stromboli, which also features sausage, prosciutto cotto, Genoa salami, mozzarella and basil, and the Lady Marmalade, made with fresh mozzarella, seasoned ricotta, basil and a hot soppressata marmalade that’s a masterpiece of sweet heat and salty charm.

The Honey Bastard is another popular favorite at Cane Rosso. “It has hot soppressata with a spicy bacon jam, so you can’t go wrong—that’s two for two right there,” Hunzinger says. “Then you add fresh mozzarella and basil, and, when it comes out, it gets a drizzle of hot honey, and that kicks it up another notch.”

And anyone who’s ever tried a Hunzinger pie knows about his fondness for the sausage crafted by chef Brian Luscher, owner of The Grape Restaurant in Dallas. “It’s a hot, sweet Italian sausage, and it’s the only sausage we use,” Hunzinger says. “I don’t know what’s in it exactly, but it cooks great on the pizza and has phenomenal flavor. We also use it in sandwiches and in the rope form.”

At this point, Hunzinger can’t resist referencing another cinematic favorite, Ferris Bueller’s Day Off. “Brian Luscher is, without a doubt, the sausage king of Dallas,” he says. “His sausage is top dog, so to speak.”

“I’m at peace when i’m cooking. it’s in my blood. if i’m not around it, i feel like something’s missing.”
—Lee Hunzinger, Cane Rosso

“I try to picture in my head what I want to make and think about what flavors will go together, not necessarily in traditional ways,” Hunzinger says. “Or I’ll see Italian dishes in restaurants and try to figure out how to make them as pizzas. How am I going to get this Chicken Marsala pizza to come out like that dish? The Marsala wine demiglaze and the mushrooms play a big role. So how am I going to make that on a pizza and make sure it will hold up?”

For his hero sandwiches, Hunzinger prefers thinly shaved, high-end meats, such as salami, capicola and—you guessed it—hot soppressata (“You’re not gonna not put that on a sandwich if it’s around,” he says). “I was taught that, when there is air in the sandwich and it’s not all packed in, it will taste better. Slicing your cold cuts thin just tastes better. A little goes a long way. It also helps your food costs.”

Like any dedicated pizzaiolo, Hunzinger says he’s “forever learning” and keeps a close eye on emerging trends. “Hot honey is definitely a trend I’m seeing at wood-fired pizzerias around the nation,” he says. “For pizza in general, I think the Detroit-style pizza, a smaller, personal-sized pan pizza with four corner slices, is catching on. It has cheese caramelized into the crust, which is something I like doing. When Zoli’s 2.0 opens, we’re putting cheese on the edges for our Grandma and Sicilian pies so it bakes into the crust like that. The flavor is phenomenal.”

Jerrier hopes to reopen Zoli’s in November, which is good news for Dallas slice lovers. The bad news is that Hunzinger may not work there forever. “I’ve always wanted to own or be a partner in a pizzeria,” he says. “Five years from now, I’d like to own more than one pizzeria. I’ve opened several pizzerias but never my own, so that’s definitely a goal of mine.”

One thing’s for sure: Wherever Hunzinger goes, he’ll keep firing up that pizza oven. “I’ll always be making pizza,” he says. “I love putting out my food and seeing people enjoy it. I’m at peace when I’m cooking. It’s in my blood. If I’m not around it, I feel like something’s missing.”