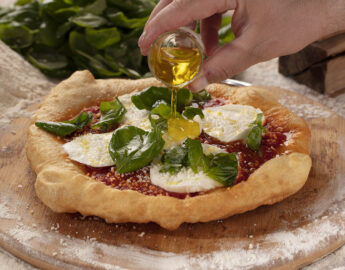 10 by Diego Vitagliano has the world's best pizza, according to Big 7 Travel.

Who has the best pizza in the world? Don’t ask us. We get around at PMQ, but we haven’t traveled that far. Plus, we don’t take sides. But folks at the Big 7 Travel website claim they’ve figured it out—at least for 2022—and, not surprisingly, it’s a pizzeria in Naples, Italy.

How this latest list of the world’s best pizzas was compiled, by whom and using what criteria is unclear. The article on the Big 7 Travel site is credited to Allie D’Almo, who has “lived in Italy and is now based in London.” The website features a variety of guides, covering everything from the best pizzas to the best burgers, the best summer festivals, and even the best BBQ joints in North Carolina and the best steakhouses in California.

Regardless, when it comes to pizza, Big 7 Travel awarded top global honors to Naples’ 10 by Diego Vitagliano Pizzeria, a planet-wide standout in a city that’s “crammed full of award-winning pizzerias.”

So what makes 10 by Diego Vitagliano special? In addition to his “superb” Margherita and Marinara pies, the website asserts, Vitagliano “injects real culinary creativity into his more contemporary iterations, with pizzas like the Pistadella, made with Fiore di latte di agerola, mortadella and Sicilian pistachio pesto. The team here only uses high-quality seasonal ingredients, and there isn’t a single pizza on the menu that will set you back more than €10.”

But take heart, Americans: U.S. pizzerias comprised more than 20 percent of the list. In fact, Ken’s Artisan Pizza in Portland, Oregon, came in at No. 2. The pizza shop’s founder, Ken Forkish, retired from the business last year and sold out to his longtime colleague Peter Kost, but that hasn’t hurt the pizza shop’s quality one bit.

“All of Ken’s wood-fired 12-inch pizzas are topped with seasonal ingredients, like braised oxtail and fennel, and served with a beautifully blistered crust,” the Big 7 Travel site states, adding, “The pizzas are just as delicious as ever.”

Peppe Pizzeria, located in Paris, took the No. 3 spot, followed by The Good Son in Toronto at No. 4 and Seu Pizza Illuminati in Rome at No. 5.

Another American eatery, Pizzeria Beddia in Philadelphia, also landed in the Top 10 at No. 6, followed by 48h Pizza e gnocchi in Melbourne, Australia, at No. 7; La Pizza e Bella in Brussels, Belgium, at No. 8; Via Toledo Enopizzeria in Vienna, Austria, at No. 9; and What the Crust in Cairo, Egypt, at No. 10.

Just barely missing a Top 10 spot was Tony Gemignani’s landmark pizzeria in San Francisco, Tony’s Pizza Napoletana. It was ranked at No. 11 on the list.

Other American pizzerias appearing on the list included Frank Pepe Pizzeria Napoletana in Connecticut at No. 15; Bricco Coal Fired Pizza in Westmont, New Jersey, at No. 16; Del Popolo, another San Francisco pizzeria, at No. 19; Detroit-style pizza originator Buddy’s Pizza in the Motor City at No. 25; Pijja Palace in Los Angeles at No. 30; Pizza Delicious in New Orleans at No. 32; Pequod’s Pizza in Chicago at No. 36; and Ops in Brooklyn, New York, at No. 39.

The Big 7 Travel’s list of the best pizzas in the world follows a similar but different list released in September 2022 by 50 Top Pizza. Anthony Mangieri’s Una Pizza Napoletana, located in New York City, topped that list in a tie with I Masanielli di Francesco Martucci in Caserta, Italy. The 50 Top Pizza list was compiled by a veritable army of respected pizzaioli hailing from Italy.