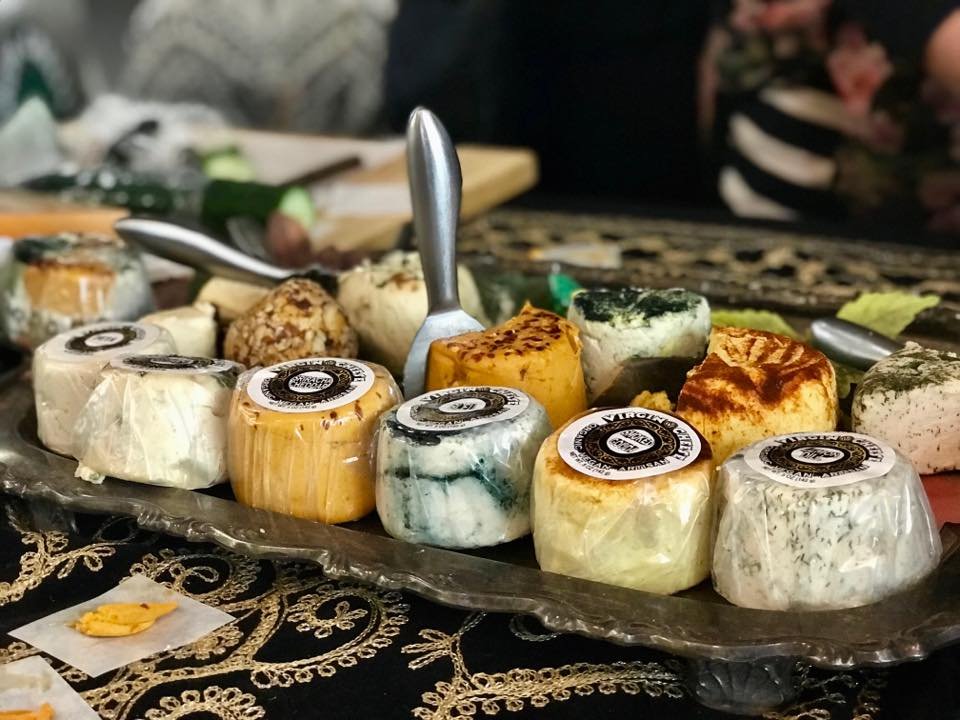 After Jodi Paige, Virgin Cheese founder and chief cheese officer, crossed over to plant-based eating in the early 2010s, she—like most others—sampled the then-limited variety of nondairy cheese brands on the market. Unsatisfied, the self-professed crafter experimented with making her own recipe and eventually launched a selection of cheeses at an auction to raise funds for a local animal sanctuary. When the gift basket of her handmade cheeses sold for a whopping $400, Paige knew she was on to something. She received additional validation when, 40 days later, she sold out at her farmer’s market debut.

That was in 2014, and as word-of-mouth grew, so too did her company. Today, Paige sells more than 40 flavors of Virgin Cheese from her home base in Clarkdale, Arizona, changing up the selections seasonally and targeting artisan-friendly outlets. “More and more people are ditching dairy, and 60% to 70% of the world population is lactose-intolerant,” Paige notes. “We have a constant creative process for making new flavors, with the goal of getting the best vegan cheeses into people’s hands through restaurants, wineries and boutique grocers.”

The Cheese Stands Alone
When rabid fans road-trip their way from Phoenix to sample Virgin Cheese, they routinely rave that the brand offers the best plant-based cheeses they’ve ever tried, Paige reports. (Nowadays, customers can place orders online, too.) Paige knows her niche—those interested in artisanal, organic, high-quality fare (which, of course, comes with a higher price tag)—and prides herself on avoiding fillers in her ingredient list. “As a handmade producer, I might not be up everyone’s alley; the price range of our products might prohibit a lot more interest,” Paige admits. “But I don’t want to eat cheese made out of rice, oil and potatoes. We use few ingredients, but our cheeses are full of flavor.”

In addition to being dairy-free, Virgin Cheese is cholesterol-free and oil-free, lovingly made with cultured cashew milk and ingredients like fresh herbs. As such, the products don’t need to be manipulated or drowned out in elaborate recipes to taste like a viable cheese alternative. In fact, Paige recommends using the cheeses where they can stand alone, like on shareable cheese boards at high-end restaurants. “Our cheeses are suitable for all kinds of different applications, but that’s exactly what we want to see—them standing alone,” Paige says. “That’s where our cheeses can truly shine.”

“Foodies, paleo, lactose-intolerant and vegan eaters are thrilled with this tantalizing line, which earned a nomination for Best Artisanal Vegan Cheese in the country last year from VegNews magazine, Paige notes. “The demand for plant-powered and organic fare is growing, especially as consumers seek to build their immunity through eating cleaner, greener and leaner. People are just used to feeling bad when they eat dairy or flavorless dairy-free cheeses. With Virgin Cheese, our mission is to offer a better vegan alternative that delivers on flavor as well as offers many health benefits.”