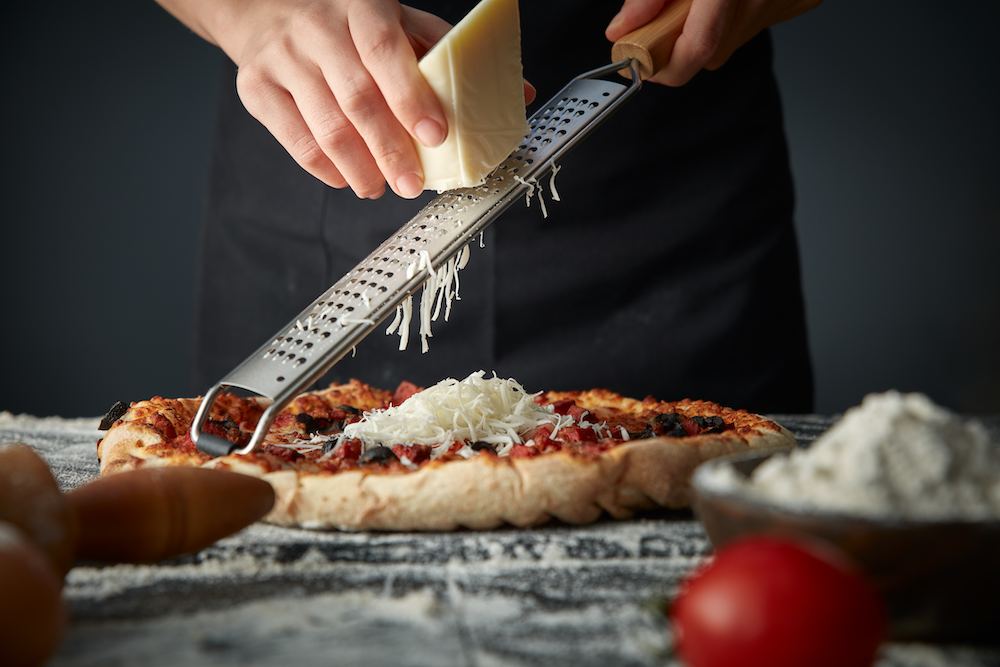 You can make a pizza without cheese, but you probably won’t sell many of them. Customers love the stuff. Whatever their favorite type of pizza, most folks want it to come with cheese. So, needless to say, adding cheese to a pie is a very important task for your pizza makers. It’s essential to teach them how to apply cheese correctly.

Two styles of cheese are most common in pizzerias: diced or shredded. While many pizza makers feel that diced cheese is easier to portion and spread, there’s no point in debating the question. The answer is easy: Go with the cheese that works best for you. Instead, this article will cover the basics of training your team members on how to add cheese to pizzas.

First, let’s talk about portioning. Let’s say that, on the first week of the month, a customer named Bob orders a large pie from your pizzeria, and the pizza maker puts eight ounces of cheese on it. Bob returns the next week and orders another large pizza, but this one has only six ounces of cheese. Do you think Bob will be happy? In fact, he would probably feel cheated. That’s why portioning cheese consistently and correctly is very important. Bob should know that he will get the same amount of cheese each and every time he orders. If he wants more cheese, he can ask for extra. But he first needs to have a standard by which to judge each pizza and make his decision.

Portioning is also important for cheese because of its cost. Cheese is a major food cost; it can drive your profits or drive you to the poorhouse.

Related: Create a custom blend of cheeses that will make your pizzas unique and unforgettable

With that in mind, portion training is obviously a must. You should provide constant training on the importance of consistency, follow up as your pizza makers learn their craft, and give them feedback and coaching. You’ll need to invest in the training of every team member to achieve the consistency that will bring your customers back again and again. Here are the key elements of a solid plan for training your employees in applying cheese to pizzas:

Follow a Chart. Every pizzeria should have a cheese portion chart. It should list the exact portions for all styles and sizes of pizzas, including portions for special requests, such as light cheese, extra cheese and double cheese. This chart needs to be posted in the appropriate area of the kitchen, and it should be highly visible so that your pizza makers can reference it. Pizza makers should be trained to refer to the portion chart every single time until they know the correct amount for each pizza size. 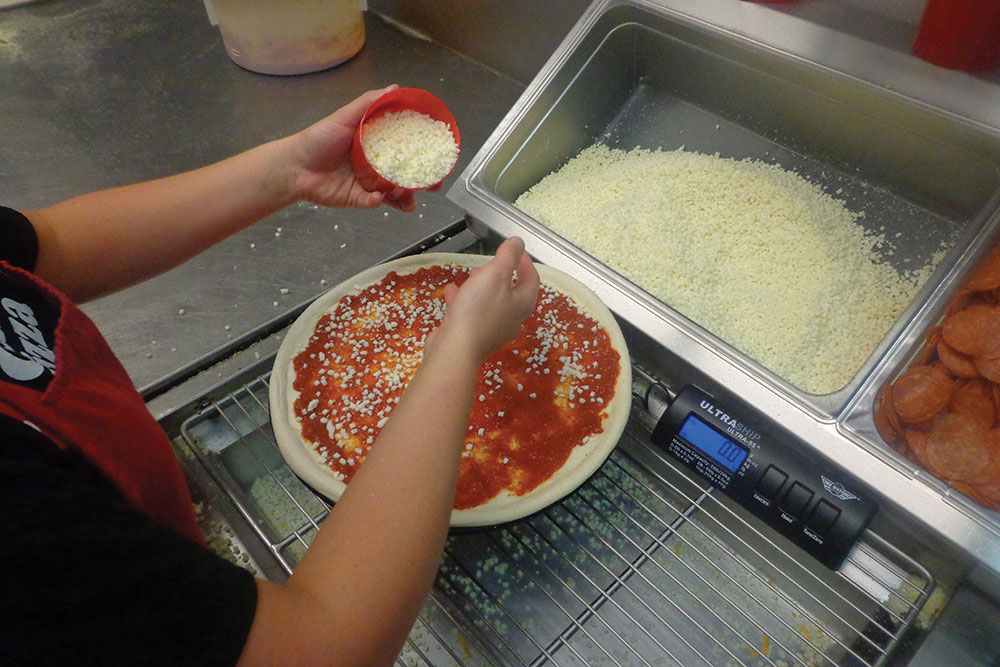 For Good Measure. You’ll also need the right tools to achieve the prescribed portion every time. A scale is probably the most accurate way to do this. Alternatively, the pizza maker can use a bowl to weigh out the correct portion of cheese on the scale, then spread the cheese by hand across the crust. A measuring cup also does the trick. Pizza makers fill premeasured cups with the desired amount and then spread the cheese over the pizza. (Measuring cups have been found to deliver a more accurate portion when used with diced cheese as opposed to shredded.) With measuring cups, though, it’s important to make sure the pizza maker doesn’t scoop out the cheese with the cup—this packs the cheese into the cup, yielding a larger portion than intended. Instead, teach the employee to loosely fill the cup by hand, allowing the cheese to drop from his hand into the cup. The cups should be well-marked with the desired portions so there is no confusion. Or you may wish to use different color cups for each portion size.

What’s the downside to all of this careful measuring? It’s more time-consuming than free-throwing—that is, using only your eye to gauge the amount of cheese to be applied (often called “guesstimating”). But the problem with free-throwing is that it’s not free. Every ounce of cheese over the prescribed amount costs you money. And every ounce under the prescribed amount brings the risk of disappointing a customer. So, granted, free-throwing is faster, but aren’t you just throwing away money at a quicker rate? Scales are proven to pay for themselves.

Now that you’ve portioned the cheese, it’s time to spread it onto the pizza crust. Where there’s sauce on the crust, there should also be cheese in proportionate amounts. The pizza maker should be instructed not to leave bare spots or large piles of cheese in one particular area. With that in mind, there are two ways to spread the cheese, depending on your portioning technique:

Using a Scale. After the pizza is sauced, it should be placed onto the scale, and the scale should be zeroed out. Now it’s time to apply the cheese and spread it out over the crust. The pizza maker should grab the cheese with both hands and let the cheese sprinkle through his fingers about 6” above the pizza. As he applies the cheese, he needs to watch the scale closely and stop when he reaches the desired portion. He should then return the remaining cheese in his hands to the cheese bin.

A good way to train on this cheesing technique is to employ a clean pizza screen. Use the portion guide to determine the desired portion for the size of the pizza that matches this screen. The pizza maker should be able to dip into the cheese bin only once and grab enough cheese to do the job—this saves valuable time during a busy dinner rush.

Using Cups. If you choose to portion cheese with measuring cups, the employee should fill the cup by hand, as mentioned previously, without packing the cheese. Holding the cup in one hand, the pizza maker should then disperse the cheese evenly around the crust with the fingers of his other hand. He should continue sprinkling the cheese until he has emptied the cup.

Alternatively, the employee can measure the prescribed amount of cheese, then dump the cup of cheese into the center of the pizza. He should then use his fingers and push the cheese across the crust. This is called the “bulldozer” method of cheesing. Again, try to cover all of the sauce and don’t leave piles of cheese.

One last note: Taking inventory is another cost control technique that every pizzeria owner should employ. It’s critical, in fact, to keeping your cheese costs in line. We mentioned earlier that customers love cheese. Unfortunately, so do your team members! If you don’t take inventory regularly, your cheese may be walking out the back door. Inventory control is imperative for maintaining the margins needed to keep your pizzeria’s doors open and your retirement account funded.

Using a consistent way to apply cheese to your pizzas will save you money and keep your customers happy. If you don’t already cover this topic in employee meetings and training sessions, I recommend that you schedule a meeting with your pizza makers soon and talk to them about the importance of cheese consistency.

Train your team, exceed your customer’s expectations and watch the dough rise!

This article was written by Dan Risner, the now-retired president of PizzaSkool, a fully hosted e-learning solution for all pizzeria employees’ training needs, and originally appeared in PMQ’s October 2013 edition. 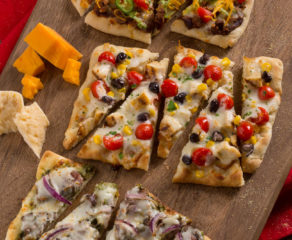