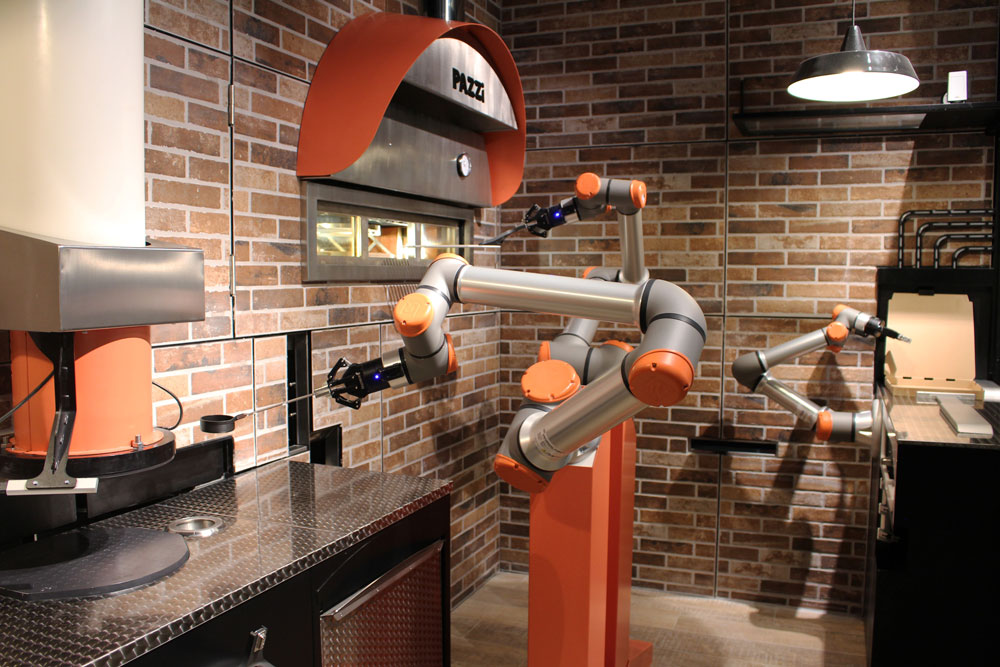 Related: N.J. pizza shop has a plan to lead the robot revolution

Basil Street Pizza was once a promising startup in the restaurant automation field, but something, somewhere along the way, did not compute. Headquartered in Los Angeles, the company touted its automated pizza kitchen—which used a three-element, non-microwave speed oven to fire up flash-frozen pies in three minutes—as “the future of pizza.” Now it looks to be history, with the company shutting down and selling its assets, as reported in late April by OttOmate, a digital business publication for the foodservice robotics industry.

For all of the skeptics who scoff at the notion of a machine making pizza for people, Basil Street’s demise might feel like validation. But Christopher Albrecht, OttOmate’s publisher, has his finger on the pizza robot’s pulse (so to speak). And he knows the issue is more nuanced than that.

“Basil Street is interesting, because it did a lot of things that you’d think would be correct,” Albrecht says. “It had 12 units in the field generating revenue. It had raised a round of institutional investment. It had a distribution deal with Prepango.”

So far, so good. But then Basil Street, which had piloted its kiosks in California, Nevada, Texas and North Carolina to apparent success, went the crowdfunding route to raise more equity. And that’s where they hit a brick wall, Albrecht believes. “This is a successful strategy for plenty of robotic startups—Blendid, all of Wavemaker Lab’s portfolio companies—but it’s not the same as running a Kickstarter [campaign]. Equity crowdfunding takes a lot of work and requires more regulatory approval. Basil Street was hampered by the pandemic, which caused production delays out of China, and getting through all the financial regulatory work to crowdfund took longer than anticipated. So the company just ran out of runway.”

So what does this say about the future of pizzabots? Not much, really. For every startup that rockets to success in an emerging field, there will always be a few flame-outs. And Basil Street had plenty of competitors that are still going strong. At this year’s National Restaurant Association Show, foodservice bots were everywhere, from Pepsi’s robotic server to RichTech Robotics’ ADAM, a dual-arm system that can mix coffee drinks and cocktails. “We think this technology is still in its infancy stages, as right now it seems like capabilities are limited,” Nation’s Restaurant News reported, “but robots are less like gimmicks and more like crucial tools as the labor shortage continues.”

“Adding back-of-house robots, especially at the scale of Domino’s and Pizza Hut, would require pretty extensive testing. Dough, for example, is different from pizzeria to pizzeria, and not every dough plays well with robots.”
— Chris Albrecht, OttOmate

Still, there are some naysayers on the consumer side. According to an April 2022 study by Big Red Rooster, 32% of restaurant customers said they’d be OK with robots making their food but don’t want to see them doing it. Forty-four percent said they’d feel “skeptical” if they saw “off-stage” bots in action, 18% would feel “sadness,” and 13% would be just plain scared.

Not surprisingly, Gen Z and millennials have a more positive attitude toward foodservice robots. And if a robot can make a pizza that tastes just as good as one fashioned with human hands—and make it more profitably, requiring less human labor and reducing food waste—a robot revolution will be hard to quell.

One thing’s for sure: Some of the country’s sharpest minds are working on it. Elon Musk might have other priorities, but several of his former SpaceX whiz kids have founded Los Angeles-based Stellar Pizza, a food truck powered by robots. Benson Tsai, a former SpaceX engineer, launched Stellar Pizza in 2019 with fellow ex-SpaceX brainiacs Brian Langone and James Wahawisan. “Working at SpaceX…was a blast,” Tsai recalls. “We designed batteries that powered rockets, spaceships and satellites. The best part of our days together was sharing meals and discovering new restaurants in Los Angeles. After five years at SpaceX, we decided to channel our skills into solving problems here on earth.”

Starting with a ball of fresh, raw dough, Stellar Pizza’s machine, which is housed in the truck, presses and shapes it into a round pizza crust, adds sauce and toppings, and pops the pie into one of four high-temperature, custom-designed ovens for baking. “We spent two years developing the machine with a team of 26 ex-SpaceX engineers,” Tsai notes. “The SpaceX ethos is to fail fast and discover the most difficult challenges as soon as possible.”

And there are some challenges that even engineers can’t solve. “Dough, a living organism, and the handling of the dough proved to be one of the trickiest problems,” Tsai says. “Our team was able to quickly discover how difficult dough handling was and brought in a dough expert, Noel Brohner from [Los Angeles-based] Slow Rise Pizza, to assist our team of rocket scientists to make the best possible pizza.”

Philippe Goldman, the CEO of Pazzi, ran into a similar obstacle. With two pizzerias in Paris, Pazzi uses robots to cover the three Bs—building, baking and boxing the pies—and they need little help from their human overlords. But the dough proved tricky, Goldman explained in a webinar hosted by OttOmate last November. “Dough always changes,” he said. “It’s not a rigid product. We have two restaurants and follow the same process, but the dough doesn’t have the same behavior at the two restaurants. The best way to handle that is to have clever robots that can adapt to the behavior of the dough. We use computer vision to understand dough behavior and adapt the way the robot is going to press and deal with the dough.”

“We spent two years developing the [pizza making] machine with a team of 26 ex-SpaceX engineers. The SpaceX ethos is to fail fast and discover the most difficult challenges as soon as possible.”
— Benson Tsai, Stellar Pizza

Robots in the Kitchen

Of course, not all pizza robots need to do everything a person can do. The xPizzaCube, a countertop system from San Francisco-based xRobotics, spreads sauce, sprinkles cheese and adds pepperoni slices on premade crusts for pies between 8” and 16”. These compact machines can be installed in any kitchen to reduce labor and fire up pepperoni pies in a hurry, according to Alena Tikhova, xRobotics’ chief marketing officer. “This is literally for everybody in the market,” Tikhova said in the OttOmate webinar. “The horizontal space in any pizza shop is very limited. If you don’t have a lot of space…you might want to look at something that uses vertical space instead of horizontal space. Once you bring in any new piece of equipment, you have to think of exactly where you’re going to place it and having enough space for your pizza maker to pass by—all of those little things that are actually not little. They’re very important.”

Tikhova, a former pizzeria operator herself, says a countertop robot can save time for any busy shop. “If you [think about] where your people are spending most of their time, I guarantee it’s not slapping the dough or bringing in ingredients,” she said. “It would be things like putting on sauce, cheese and pepperoni. Concentrate on those first and automate them, and you’ll see massive savings.”

Middleby Corporation’s Lab2Fab (L2F) has engineered its own machine that will sauce, cheese and top pizzas. Lab2Fab’s PizzaBot 5000 (PB5K) has sensors and computer vision capabilities to dispense ingredients precisely, as well as robotic arms to move the prepped pie into the pizza oven. “A lot of people should be looking at this type of application and saying, ‘I can bring this in, start some automation [and] get consistency,’” said Lab2Fab president Shawn Lange in the OttOmate webinar. “It’s not necessarily about removing the humans—it’s about repurposing them….The labor challenge is very unlikely to get better. It’s very likely to get worse. If you don’t jump on attacking this issue today, you’re going to find yourself completely behind…in a few years.”

But what about stretching the dough before topping it? Ecor International has that covered, thanks to its automated dough stretcher called OperaPrima. “OperaPrima is designed to be a very user-friendly machine,” says Ecor International CEO Giovanna Lucietto. “You just need to take the dough, place it over the center of the dish and close the drawer. You may need some practice to configure OperaPrima, but the display is also very easy to use. The machine works for you while you’re carrying on other activities.”

Lucietto says the OperaPrima is “the one and only machine in the world that rolls out the dough imitating the hands of the pizza chef. The result is artisan—it does not stress the dough and creates a well-defined edge according to the set parameters.”

“It’s not necessarily about removing the humans—it’s about repurposing them….The labor challenge is very unlikely to get better. It’s very likely to get worse.”
— Shawn Lange, Lab2Fab

Automation isn’t limited to making pies. Domino’s has tested robotic delivery, and several foodservice automation companies have surfaced with their own tech to get food to a customer’s doorstep. Marco’s Pizza is testing voice-to-text technology for order taking and a pizza making robot to improve efficiency and accuracy at its high-traffic stores. And California chain Mountain Mike’s Pizza has been working with San Diego-based It’s Your AI to test a chatbot that can take complicated orders over the phone as smoothly as a live person. That system is so convincing, says It’s Your AI founder Jay Lacny, that one customer showed up in person at a Mountain Mike’s store and asked to meet “Shea,” the female chatbot who had previously taken his phone order. “Instead of using a computer-generated voice, we have a voice-over artist, a real person, recording everything,” Lacny says. “And when we’re ready to offer services in, say, Mississippi, we’ll add a Southern accent. A Brooklyn accent, Ivy League accent, whatever it is, we can spin it up in, like, 20 hours.”

No one’s likely to develop a crush on a robotic food runner, but you never know. In June, Ledo Pizza, a Maryland-based brand, debuted its newest team member—dubbed Ledo Bot 9000—at a location in West Springfield. Manufactured by Bear Robotics, the Ledo Bot runs carryout orders to the counter so that flesh-and-blood team members can focus on other tasks and take better care of customers. “With Ledo Bot running carryout orders from the kitchen to the counter, there won’t be any barriers between the guest and employee during this repetitive task,” says Ledo Pizza president Jamie Beall, adding that the robot will be implemented in additional stores soon.

Just don’t expect the top chains to use pizza making robots right away. For starters, they’ll have to overcome the same problems Pazzi and Stellar Pizza encountered—but on a much larger scale. “Adding back-of-house robots, especially at the scale of Domino’s and Pizza Hut, would require pretty extensive testing,” Albrecht says. “Dough, for example, is different from pizzeria to pizzeria, and not every dough plays well with robots. Automation needs to be attuned to particular dough types to prevent tearing and other mishaps.”

And there’s no reason to worry that robots will nudge talented pizzaioli out of the kitchen, Albrecht says. “Pizza robots aren’t meant for every pizzeria. Robots are best suited for high-volume locations where people might not care as much about getting an artisanal pizza. If I’m stuck at an airport at 11 a.m. after a series of delays and all the restaurants are closed, that vending machine pizza is going to taste pretty good.”