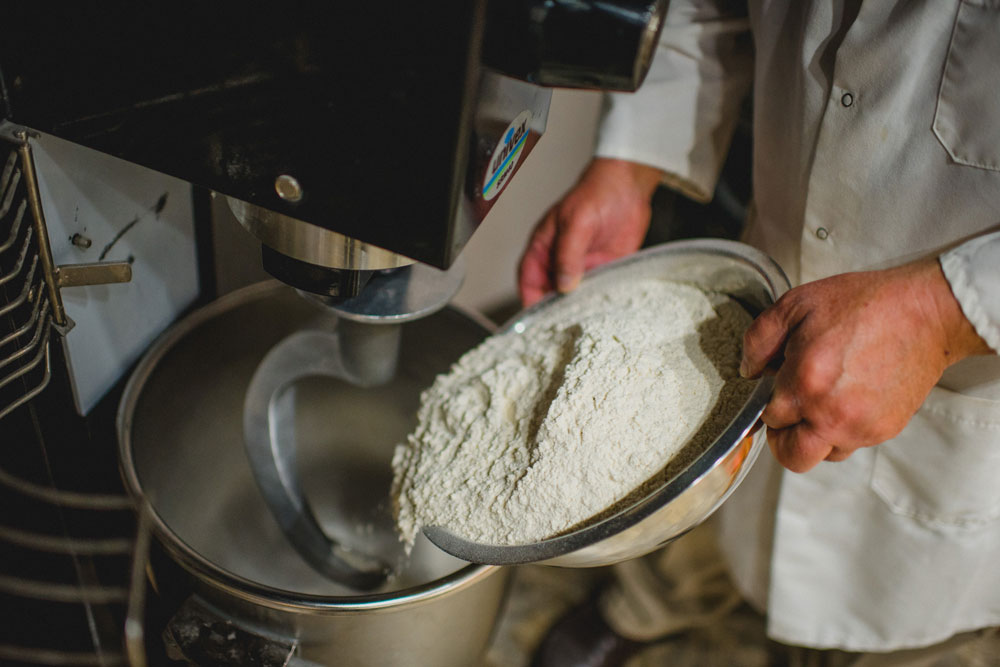 Every farmer needs a tractor. Every cowboy needs a horse. And every pizzeria operator needs a dough mixer. But that’s just one of the many tools it takes to build out a pizza kitchen. Making a lot of dough—and managing it efficiently—on a daily basis requires a plethora of equipment, from presses and sheeters to rounders, dividers and dough boxes. If you’re a high-volume pizzeria operator, you already have most of this equipment in place, but for smaller stores looking to expand or newcomers to the business with big, bold plans, it’s helpful to create a checklist and to understand why each piece is important. Based on decades of input from dough experts, including the late, great Tom “The Dough Doctor” Lehmann and PMQ test chef Brian Hernandez, we’ve put that list together for you!

This one is the biggie and merits careful consideration. Mixers come in several styles and load capacities ranging between 15 and 300 pounds. Choosing the right mixer will probably come down to how many pizzas you plan to make on a weekly basis.

Most pizza operations use either a planetary mixer or a spiral mixer. Planetary mixers are commonly found in restaurant kitchens because they’re so versatile and can accommodate a range of attachments that can be used for shredding, slicing and grinding in addition to simple mixing. As for mixing dough, both planetary and spiral mixers have a mixing hook, but each works differently. In the case of a planetary mixer, the hook moves around the bowl, whereas the spiral mixer’s hook doesn’t budge—instead, the bowl moves around the hook. The advantage to the latter is that its gentle mixing action creates less friction and heat, and too much heat can cause problems with your dough. The disadvantage of a spiral mixer, however, is that it has only one purpose: mixing dough. Spiral mixers also tend to cost more than planetary mixers and can be harder to clean, because the bowl typically can’t be removed.

The upshot: If mixing dough is all you’re worried about, a spiral mixer is more than up to the task. Most can handle dough sizes from as little as 25% of rated capacity to 125% of rated capacity, although exceeding rated capacity is not recommended. If you need a mixer that can do a lot more—such as shredding cheese or cutting veggies—a planetary mixer with attachments might be a better choice for your operation. Planetary mixers are also better for mixing very high-absorption dough (70% absorption and higher) as well as for dough with short mixing times (think cracker-crust pizza).

Meanwhile, don’t forget about vertical cutter mixers (VCMs). Equipped with at least two blades (typically sharp and dull), a VCM can mix dough as quickly as 45 seconds and can also be used for making sauces, shredding cheese and cutting vegetables. Like a planetary mixer, it’s highly versatile, but it can also be tough on your dough. 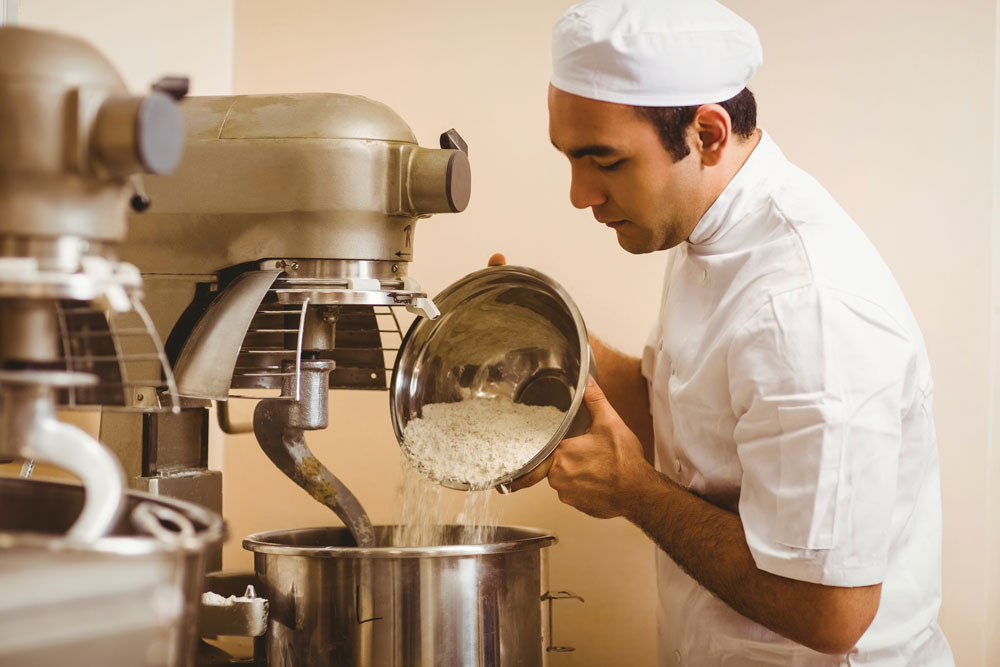 A hot press uses a heated head to press your dough ball into a die cavity or onto a flat platen. It can create a variety of shapes, including round and rectangular crusts. But you’ll likely need to add some kind of relaxing agent to your dough formula so the dough can stretch, and to reduce shrinkage (or dough memory) after pressing your dough. Keep in mind that the heated platen will activate your yeast to some extent. If you’re making dough for a thin-crust pie, you’ll want to pop it into the oven immediately after it’s pressed. On the other hand, the heated dough offers an advantage when you’re making thick-crust or deep-dish pies, because it reduces the rising/proofing time needed to impart the desired finished-crust characteristics.

Cold presses don’t rely on heat to help form the crust. But with a cold press, you’ll need a soft, flowing dough, achieved through a high water-absorption process, a high finished-dough temperature (90° to 100°) and reducing agents. When you’re working with soft dough, keep in mind that it’s harder to get a well-defined, raised edge for your crust. You’ll also need special pans on which to press the dough. On the other hand, cold pressing is great for focaccia bread or for developing a fried-bottom crust.

Dough sheeters and rollers are useful in producing mass quantities of dough, such as for a commissary. Sheeters and rollers form your dough balls into flattened dough skins. With larger sheeters, you can even create long ribbons of dough and cut them into individual skins using a circular cutting die.

The roller on your dough sheeter tends to force gas out of your dough along the way, producing a tougher dough with a thick, heavy internal cell structure. For a more porous cellular structure, allow the dough to proof/rise for 20 to 70 minutes between the forming and baking stages. Since sheeters tend to toughen the dough (through gluten development), you might end up getting some snap-back, so try using dough relaxers like L-cysteine, glutathione, deodorized vegetable powder or sodium metabisulfite. Dough sheeters are ideal for creating a traditional crispy-crust pizza and deliver even, consistent results. You should also be able to adjust your dough sheeter for different types of non-pizza dough, such as ciabatta bread.

A divider/rounder probably isn’t necessary for a smaller pizza operation, but for high-volume stores, it can be a real time-saver. You can purchase each piece separately or in a single unit. The divider cuts dough into equal sizes, while the rounder does exactly what its name implies: it rolls the dough into nice, round dough balls.

You can choose between manual and electric dividers. The manual machine lets you insert cutter/portioner plates and blades, based on the desired dough portion. Electric dividers can be programmed to cut the dough based on the portion you’re looking for and are most commonly used in combination with rounders.

For some operations, a rounder might be all you need. A staff member at the bench can manually divide an 80-pound dough into 10-ounce dough pieces in about 15 minutes. Each piece can be tossed into the rounder, and another worker can catch the dough balls as they come out of the rounder. With practice, two people can divide, round and box an entire 80-pound dough batch within 20 minutes. 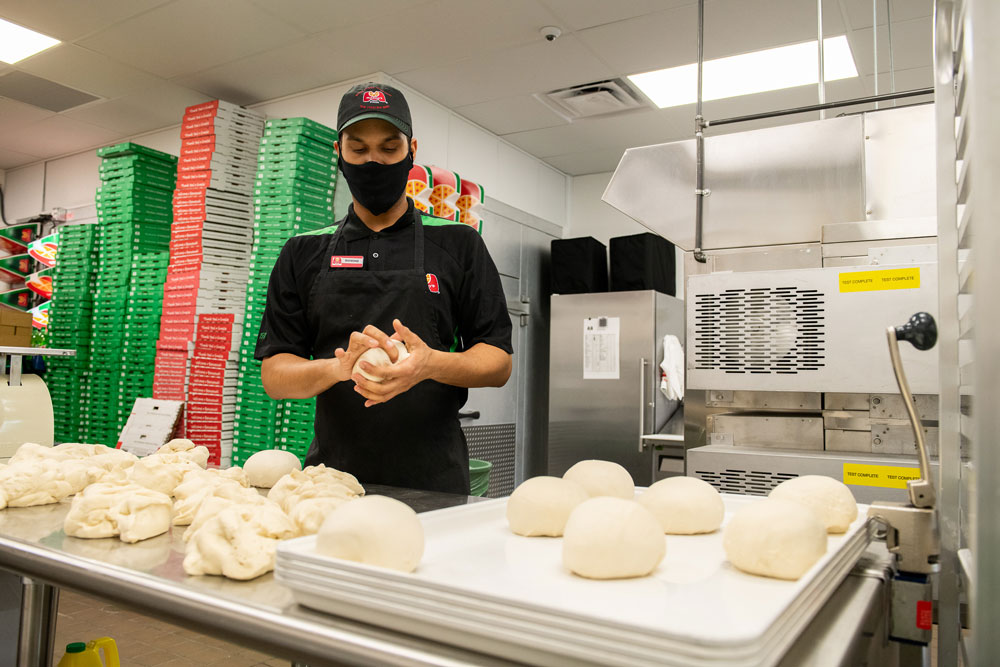 Once you’ve got your dough balls formed, storage is the next big concern. Dough boxes have long been the industry standard for this stage of the dough management process. Available in varying heights for different dough ball sizes and weights, they also come in different colors for different days of the week or for different types of dough. When properly cross-stacked in the cooler, the dough balls can be uniformly cooled to internal temperatures between 50˚ and 55˚F. You can also use them to transport dough from one location to another if needed. But they’ll need to be cleaned regularly. Plastic dough scrapers are helpful for fast, easy cleaning of plastic boxes, but don’t use a metal scraper or you might gouge the surface of the box, making it harder to remove the dough balls and to keep the boxes clean.

Pizza peels are available in metal, aluminum and wood/composite materials. You’ll want to use your wood/composite peel for building your pie and transferring it to the oven, while a more heat-resistant metal peel should be used for moving the pie around in the oven and pulling it out. Steel pizza peels clean easily and can be durable and impact-resistant. Aluminum peels are also durable while lighter in weight and more maneuverable. Peels come in various shapes and sizes for different types of pizza. A rectangular peel is usually a safe choice. For wood-fired ovens, look for a peel with a perforated metal surface, which allows the flour to shake off from the bottom.