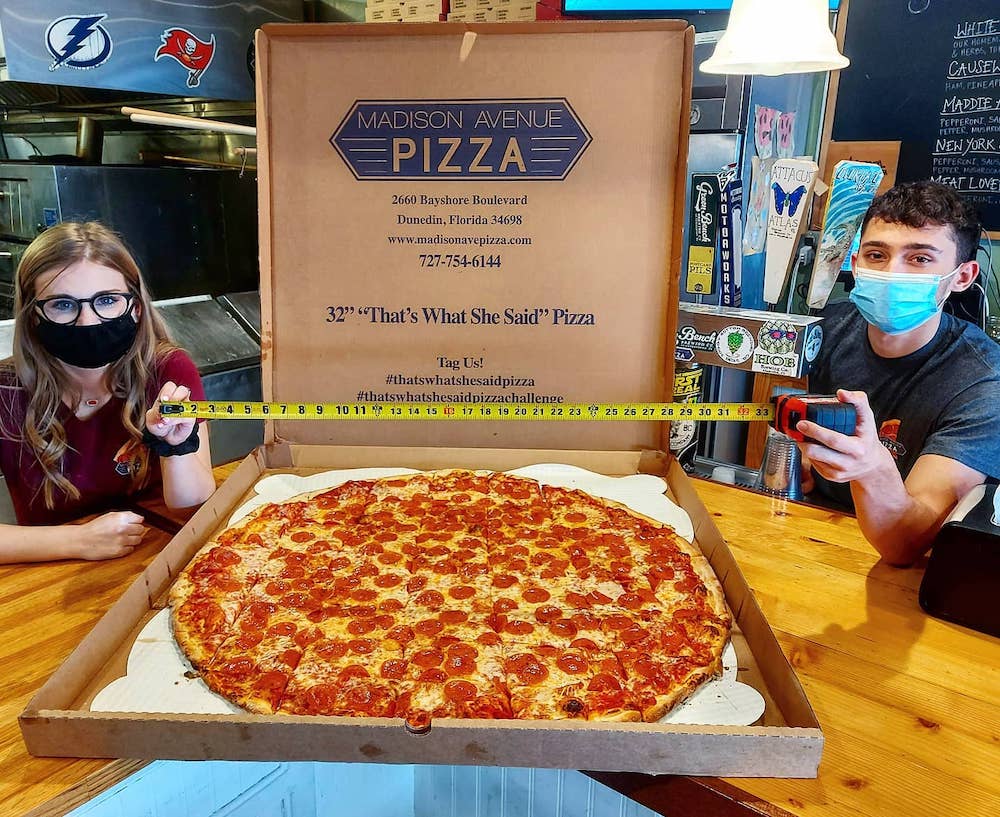 Related: This model turned medical student is hungry to prove herself in eating competitions

Michael Scott wouldn’t be able to stop cracking jokes about the 32-inch That’s What She Said pizza, which debuted in late January with a special eating challenge at Madison Avenue Pizza in Dunedin, Florida.

Owner Sean Ferraro co-created the monster pie, which references a running gag on “The Office” and is said to be the largest pizza in Tampa. He told WFLA that a lot of planning went into it. “So it took me six months to put this all together,” he said. “Everything has to be custom-made, the boxes, everything has to be fabricated from scratch. So, while that was going on, we researched—me and my staff just combed and combed the internet, looked at every menu of every pizzeria that we could find. And if it isn’t the biggest in Tampa Bay, I would be surprised.”

And nothing draws attention to a new plus-sized menu item like an eating challenge. Two people must eat the entire 32” pizza (with a single topping) in one hour. The contest claimed its first victims on January 31 when a couple identified as Paul and Lacie tried—and failed—to devour the one-topping titan.

But another team easily finished it off, even though this winning duo had an advantage: Randy Santel and Katina DeJarnett (also known as Katina Eats Kilos) happen to be competitive eaters. They ate the pie in 25 minutes and 16 seconds. Madison Avenue Pizza chronicled their winning effort in a Facebook Live streamcast on February 4. That post garnered 158 reactions, 103 comments and 12 shares.

The That’s What She Said pizza sells for $69.99 for cheese only plus $7.99 for each additional topping. Ferraro said it sells best on the weekends.

The pizza shop wasn’t content to rest on its 32-inch laurels, however. The owners have also unveiled what they billed as Tampa’s most expensive pizza: The Madison Avenue Pizza Ultimate Valentine’s Day Experience. Selling for a cool $1,000, it features handmade Carmody cheese from California that’s been infused with 24k gold leaf; artisan Salumeria Biellese pepperoni from New York; shaved imported black truffles; basil microgreens; and a 24k gold-plated, fresh basil leaf. They pair the pizza with a 2006 vintage Dom Pérignon rosé champagne.