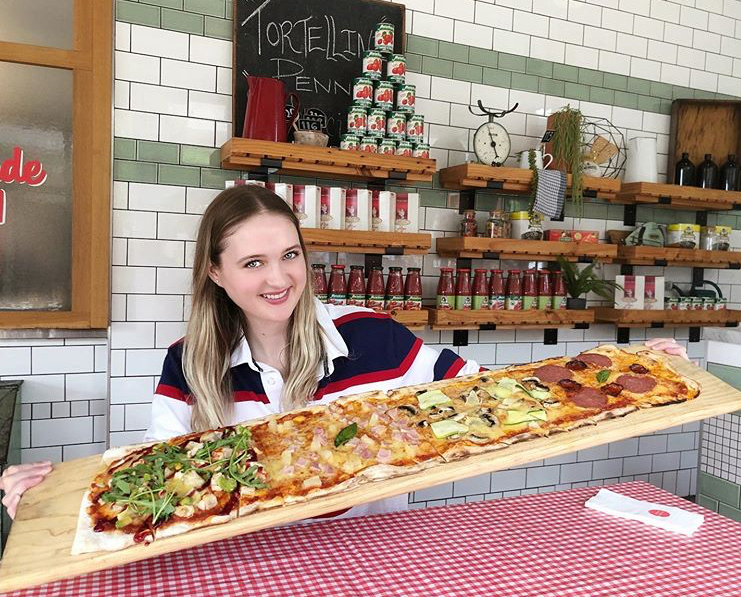 As a model and a medical student, Nela Zisser knows the importance of a healthy lifestyle. But as a competitive eater, she also knows that sometimes you’ve just gotta eat the whole pizza … even if it stretches out for more than a yard.

The fresh-faced, 116-pound Zisser, a former Miss Earth New Zealand, has become something of a media celebrity thanks to her Youtube channel that captures her gastronomic exploits in all their gut-wrenching glory. In 2015, she defeated champion eater Eric Lamkin in a one-on-one burger challenge, scarfing down 20 McDonald’s cheeseburgers in a little over 16 minutes. Two years later, she gobbled up 10 Filet-O-Fish sandwiches in 5 ½ minutes, consuming a total of 3,900 calories, 190 grams of fat and 5,900 milligrams of sodium.

More recently, Zisser took less than five minutes to devour a meter-long pizza from Goode Brothers in Auckland, New Zealand. As the video below shows, her strategy is to roll up each slice, stuff it into her mouth and finish it in about four bites and then grab a sip of water before moving on to the next one.

In other challenges, she has inhaled a five-pound burrito in less than two minutes and wolfed down a 10,000-calorie English breakfast in 42 minutes. According to New Idea, an Australian website, Zisser, who’s also a full-time medical student and a restaurant owner, stays slim because she knows when to put the fork down. “I normally feel a little bloated [after a competition] but nothing too bad,” she said. “I normally won’t eat again that day unless it was a smaller challenge.”

“I do intermittent fasting, so I normally eat two larger meals a day after 5 p.m.,” she told New Idea. “I feel like this gives me a lot more energy, and I’m able to get more done throughout the day.”