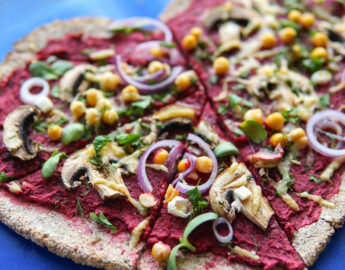 Domino’s and Pizza Hut are both known for their relatively tame menus in the U.S., but the toppings get a little weird overseas, according a recent survey from NetCredit.

In addition to scouting out the two leading brands’ craziest pizzas, the NetCredit survey also offers a price guide (in U.S. dollars) to Domino’s and Pizza Hut fans looking for the best (or priciest) deals anywhere they might be in the world.

NetCredit sourced the price of a large cheese pizza with a classic base from Domino’s and Pizza Hut in the biggest city of every U.S. state and the capital of every country. NetCredit also took note of the most expensive and most unique pizza item in each location.

For Pizza Hut, we’re talking about the Scampi pizza, featuring shrimp and garlic sauce, selling for $28.57 in Luxembourg, or the Hot Butter Cuttlefish pizza in Sri Lanka for $9.12. NetCredit also zeroed in on the Chicken Cranberry pie in New Zealand ($8.84), the Sweet Chicken Curry pizza in Belgium ($21.43) and the Macon, Avocado, Feta pizza in South Africa ($7). (In case you’re wondering, macon is a cured and smoked form of mutton, although in South Africa, the term is used for various bacon alternatives, including ones made from beef.)

Overseas Domino’s stores have their fair share of unique pizzas as well. Consider the Lobster Sukiyaki & Beef Double pizza in Taiwan, going for $24.93, or the Jambalaya pizza in Nigeria for $14.72. In Australia, you can order Domino’s Chicken & Camembert pie for $13.10, and New Zealand has the Apricot Chicken pizza for $8.67.

If you’re traveling through Norway on a budget, you might want to stay away from Domino’s Tacorama, featuring nacho chips, taco spice, beef, jalapenos, grilled peppers, mozzarella and sauces. It’s not particularly unique by American standards, but you’ll have to fork over $30.80.

So where can you find the cheapest cheese pizza from Pizza Hut? Try India, where a cheese pie goes for just $3.05. For the lowest price on a Domino’s cheese pizza, you’ll want to get on over to Ghana, where you can get one for a measly $4.03.

But let’s say you’re a well-heeled fan of the big-chain brands with money to blow. Finland has the world’s most expensive Pizza Hut cheese pizza at $31.65, while the most expensive Domino’s pie can be found in Singapore for $23.57. Oh, and if you’re looking to splurge, you can shell out $36.60 for a Super Supreme pizza from Finland’s Pizza Hut.

Travelers to the UK will pay $19.99 for a large cheese pizza at Pizza Hut and $22.34 at Domino’s, according to the NetCredit survey. NetCredit notes that Domino’s UK price “involves a 900% markup on ingredients, according to one calculation. However, the firm insists that high UK taxes and regular deals and discounts mean this supposed profit margin is just pie in the sky.”