Women in Pizza: How Pizzaiolas Are Shaping the Industry's Future - PMQ Pizza Magazine 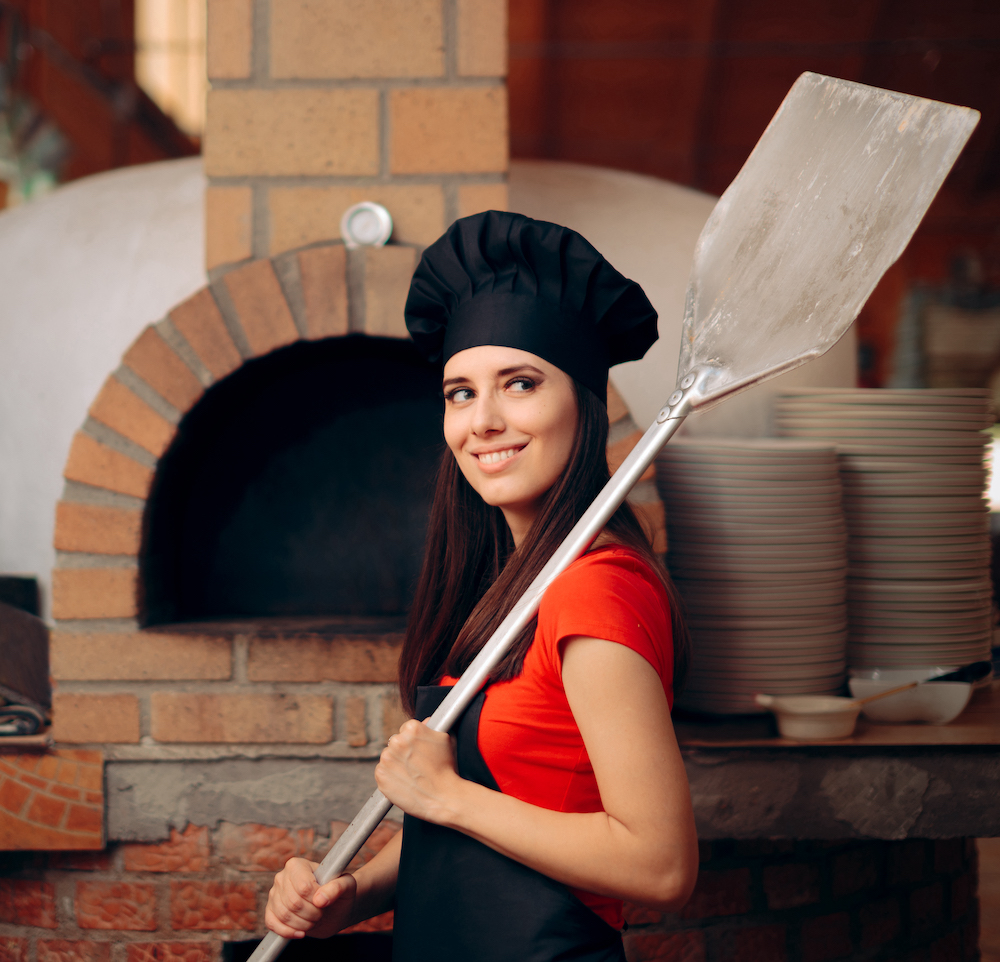 Women have always been the driving force behind the pizza industry, not to mention the namesakes of beloved independent pizza shops around the country. Mamas and nonnas created—or certainly inspired—the recipes for many of our favorite hometown pizzerias from the start. So why do men get all the credit? Why are whiskered dudes depicted as the “faces” of the industry? And why haven’t you seen more women on the cover of PMQ?

That last one, of course, is our fault. True, many women have graced PMQ’s covers in past years, but they’re typically pictured with their co-owner husbands. Solo female operators have been few and far between as cover subjects—most recently, Janet Duran, owner of 550 Pizzeria in Laredo, Texas, in August 2022, and Megan Jones-Holt, the “Pizza Witch” of Stockton, New Jersey’s Market Pizza in March 2021. (Jones-Holt has since sold Market Pizza.)

PMQ can—and will—do better in 2023. And all due credit goes to the Women in Pizza movement, founded in September 2019, for spurring us on. For our recent Pizza Power Report, we spotlighted the movement and posed some questions to its cofounder, Alexandra Mortati, the creative director of Orlando Food Sales, as well as Stephanie Swane, publisher and editorial director of Modernist Cuisine (which released the three-volume Modernist Pizza earlier this year). Swane also hosts the Instagram Live streamcast called “Women in Pizza.”

Mortati and Swane both believe it’s time for female pizzaioli to step forward and get the attention they deserve. We couldn’t agree more. Here, we present the full Q&A with these industry leaders about the past and present role of women in the pizza industry and how they are already shaping its future.

PMQ: Can you tell us a little bit about Women in Pizza and its goals and how you’re implementing these goals?

Alexandra Mortati: Women in Pizza is a movement that empowers women in the pizza industry to share their stories, display their talents, inspire innovations, and connect with one another and the world. Whether you’re a pizza maker, manager, proprietor, distributor, manufacturer or importer, you are a woman in pizza, and your role is crucial. Our goal is to give a voice to the underrepresented female segment of the industry and to inspire more women to follow their pizza passion and join.

To implement our goals, my colleague Casey Derk and I created an online platform with social media handles and a website. We also host and participate as Women in Pizza in in-person events around the country, like the Pizza Expo, Chicago Pizza Festival, Las Vegas Pizza Festival and more.

PMQ: It seems like we’re seeing more women “emerge from the shadows” (to use Stephanie’s words) in the pizza industry. Why do you think that’s happening right now?

Mortati: I think media and articles like this one and the increased support of the pizza community have made more room for women to emerge. Whether it is intentional or not, as women, we are conditioned to be quieter and submissive. It’s hard to break that cycle and make space where, for so long, there was none. I look at women like our ambassadors, who had to overcome chauvinistic hurdles at every turn and weren’t given the respect or acknowledgment they deserved simply because they were women. It’s women like them that paved the way. They took up space and, while doing so, empowered more women to take up space alongside them.

Stephanie Swane: A few things, I think, have helped, including the media: Women are actually getting covered. When I started working on Modernist Pizza over five years ago and reading pizza trade magazines, rarely did I see a photo of a woman making pizza, featured as an owner, writing articles or even featured in supplier photos from equipment to ingredients.

While women started winning [culinary] competitions, they were not the focus. Check out the coverage for Laura Meyer winning [second place in] the World Pizza Championship competition in 2013. Only one magazine cover per year over the last three years has featured a woman.

[Editor’s note: As you’ll see in this link, Meyer and third-place winner, Mara Mancosu, barely get mentioned at the end of the story.]

How many workshops feature a woman leading the talk/workshop at Pizza Expo over the last five years? How many times has a woman been a keynote speaker? Ann Kim [founder of Hello Pizza and Pizzeria Lola] was the keynote in 2018. If this is the biggest show for the industry, why is everything still very male-dominated? Competitions are also seeing more women in the spotlight with winning pizzas in both the U.S. and Italy. This has a lot to do with women now on the two major American teams: the U.S. Pizza Team and the World Pizza Champions. In 2013, Florina Pastore from Italy won the International Pizza Challenge. Who was the first woman on any of the U.S. pizza teams and when?

To be clear, the women have been there, but they’re not the focus. The first pizzaiola I met while working on Modernist Pizza was Giorgia Caporuscio, and she was working at Keste. Now she’s running Don Antonio in New York City, one of the very few pizzerias owned by women in a city with thousands of pizzerias.

I would love to see someone actually write and share facts about the questions I raise since one of the best ways to overcome an industry dominated by men is transparency.

PMQ: So why don’t we see more women owning pizzerias?

Mortati: So many pizzerias are named after the women who inspired them, whether it’s a grandmother, wife, mother, etc., but it’s not surprising to me that you see less pizzerias owned by women. Traditionally, women were expected to be homemakers, while men were the ones with careers, running businesses and cooking professionally. Naturally, the women who taught them to cook or shared their family recipes inspired their businesses. Today, a lot of the women who are a part of these businesses co-own them with family members and can be found behind the scenes. We’re still in a time where the shift is happening. As representation increases and women start to see others who look like them running these businesses, hopefully they feel empowered to follow their pizza passion and join the industry.

Swane: Men are looking at other current female pizzaiolas as inspiration. I don’t hear women saying that their recipes are from their fathers/grandfathers. Instead, women identify in the present with inspiration.

Women are now able to get small business loans and have the backers to create capital to open their own businesses. COVID-19 created a new paradigm for many people to shift from what they were doing in the corporate world to self-employment, especially if you look at how many start-ups began from [the owners’] homes and ventured into pop-ups, test kitchens and food trucks. Women are finding ways to build a business model that works while juggling family responsibilities too.

Related: The Iron Lady: How Donatella Arpaia plans to turn Prova Pizzabar into a national brand

PMQ: Any idea why they’re stepping forward now and taking their well-deserved place in the spotlight?

Swane: Motivation. I think women are sick of being pushed aside and are more than happy to put their elbows up and fight for their well-deserved spot alongside their pizzaiolo allies. The spotlight is really making room for them now.

PMQ: In your opinion, how will women owners make the pizza industry stronger?

Mortati: Women in the pizza community have always been and will continue to be vital to the advancement of the pizza industry. Just because they may not have been the person you saw behind the counter doesn’t mean they haven’t been a part of the industry. Many women have worked behind the scenes and are the reason businesses have kept their doors open. They’ve been the inspirations and people behind the recipes for generations. Women bring diversified talents, skills, experiences and perspectives that can only help the industry continue to evolve!

Swane: Diversity always makes an industry better, breaking down barriers and creating an alliance to inspire more women by sharing their stories and letting other women know that they are not alone. Pizza is all about sharing, and women in pizza are there to help create a better industry for all.

PMQ: Stephanie, can you tell us the story behind your Women In Pizza streamcast on Instagram Live? And what are you learning from the women you’ve interviewed so far?

Swane: While working on Modernist Pizza, I consistently asked pizza industry people about women I should meet. When COVID-19 hit, we stopped traveling, so we couldn’t meet more people to interview for the book. I met Alexandra at Pizza Expo and loved the movement she was starting. We discussed doing a few interviews with the launch of Modernist Pizza in October 2021.This was a great way for me to chat with key women I met that we weren’t able to include in Modernist Pizza. We started out with the Ambassadors of WIP on Modernist Cuisine IG Live—Laura Meyer and then a panel with Nicole Russell, Giorgia Caporuscio, Shealyn Coniglio and Nicole Bean. We had so much fun and had so many more women we wanted to talk to that Alexandra and I decided to kick off a weekly conversation on the WIP IG Live in March 2022 in conjunction with International Women’s Day.

I’ve learned so much from the variety of women that I had the pleasure of talking to for 45 minutes, plus answering listeners’ questions. Every woman has a unique story, and they all found their path to pizza in different ways. I’m so proud to know them and to be part of their journeys and look forward to every time we gather together. It’s so great to see more opportunities for women to inspire each other, attend each other’s workshops, eat at each other’s pizzerias and create a place for everyone to be welcome.

Related: V&M Bistro: This sister act can outperform the men on any culinary stage