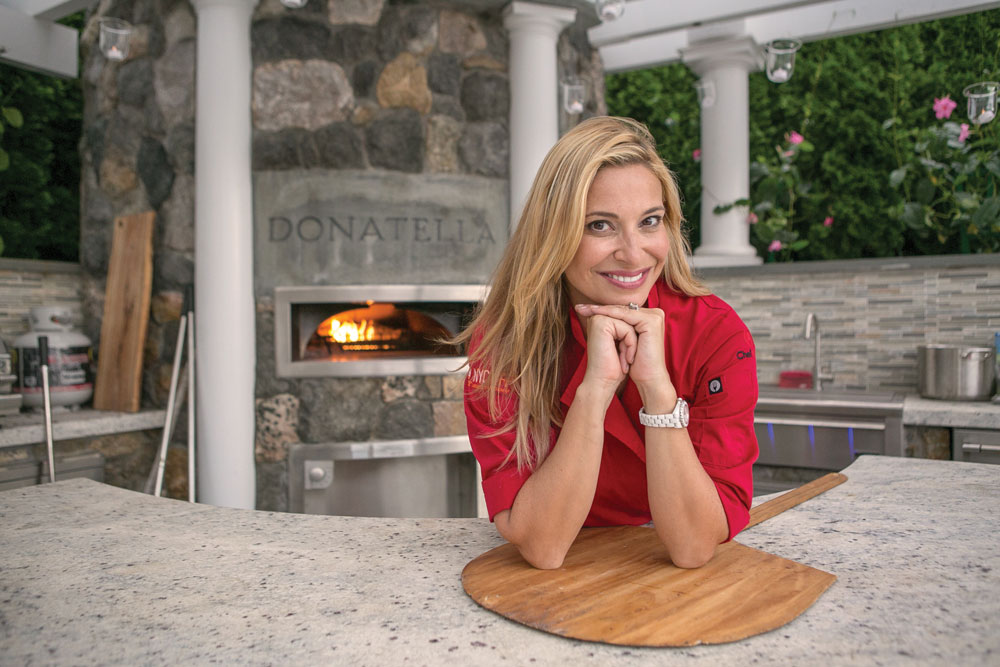 As a hardworking restaurateur raising a family in Long Island, New York, Italian immigrant Lello Arpaia told his little girl, Donatella, that she could be anything she wanted to be when she grew up—just stay out of the restaurant business. It’s a good thing she didn’t listen.

Strictly speaking, Donatella Arpaia, now famous as an Iron Chef America judge and one of the most successful restaurant moguls in the country, did heed her dad’s advice—at first. She went to college, studied law and even became an attorney. But that was Lello’s dream, not hers. Currently, she’s building a pizza restaurant brand, called Prova Pizzabar, that she hopes to take nationwide. And from her Neapolitan-inspired, trailblazing menu and stellar service to her bold expansion strategy, she’s taking care to do it right, one store at a time.

Arpaia opened her first restaurant, Bellini, when she was just 26 years old. It wasn’t the kind of career Lello had in mind for her. After starting his own Italian eatery, called La Tavernetta, in Long Island and then pioneering fine Italian dining in New York with the celebrated Lello’s in the early 1970s, he knew the work was hard, the hours were long and the margins were thin. “My brother [Dino] started working in the restaurant when he was 14,” Arpaia recalls. “My dad made him do everything, from dishwasher to porter. But he wanted his daughters to be lawyers or doctors—we were not to go into the restaurant business…He felt it was blood work, sweat work. You don’t have a family life. You give your whole life to it. And he didn’t want that life for my sister and me.”

But Arpaia spent much of her childhood living right next door to the family’s restaurant, and the food business inevitably seeped into her blood. “I was the youngest child and, because they couldn’t afford a babysitter, I literally slept by the dishwashing station as a baby, because that was the only way I would go to sleep,” she says. “My backyard was the restaurant kitchen. I would play on the swings and then run into the kitchen and steal the tartufo and the tortini.”

She also spent summers with her grandparents in Puglia, where she had her first taste of real Neapolitan pizza. “That’s ingrained in my mind as perhaps the best thing I’ve ever tasted in my entire life,” she says. “Later, when I made my first foray out of fine dining and into pizza, I was looking to recreate that sense memory from my childhood of Neapolitan pizza.”

But, ever the obedient daughter, Arpaia grew up and found herself practicing law in the Empire State Building—while living in a studio apartment above her brother’s restaurant on 54th and Park Avenue. “I was not happy,” she recalls. “I found the study of law very interesting, but the actual practice was totally not me.”

One day, she had to fill in when the hostess didn’t show up at her brother’s restaurant. “I had that a-ha moment,” she remembers. “I thought, ‘Wow, this is so comfortable.’ I felt alive. I told my father the next day, ‘You said if I become a lawyer, I can be whatever I want to be, and I want to go into the restaurant business.’”

The Hostess With the Mostest

Six months later, with her dad’s support, Arpaia opened Bellini on 52nd Street, between 2nd and 3rd Avenues, where she served the kind of authentic Italian food she grew up eating. Just as her father predicted, it was a struggle, but she focused on friendly service, personality and marketing smarts to stand out from the pack. “I started writing handwritten notes to everyone,” she says. “I went to the concierges [at the surrounding hotels] and, because I couldn’t compete with other restaurateurs who were paying them, I would remember their birthdays and bake for them and bring them cookies. It was grassroots marketing.”

It took a couple of years, but Bellini became a hotspot, attracting famous New Yorkers like Walter Cronkite. At 29, she partnered with chef David Burke to launch another fine-dining establishment, davidburke & donatella. “I went from small-town to one of the top-rated restaurants in New York,” she says. “And I was unprepared for it. David was the celebrity chef, and everyone thought I was the coat-check girl. But that really put me on the map and paved the way.”

Dubbed the “Hostess With the Mostest” by Zagat, Arpaia was the queen of the front of the house. She also schmoozed the local press, overcoming her shyness and fear of public speaking to appear on area TV stations and polish her on-camera skills. But when she opened her third restaurant, she resolved to take full control of her career. “I was tired of being completely beholden to chefs,” she says. Although she knew Italian cuisine better than most, she enrolled in the Italian Culinary Academy to dig deeper into the craft. “That’s not because I wanted to go behind the line and cook,” Arpaia clarifies. “I wanted to have the power to create the menu and, if I had to kick somebody out, I could.”

Power, after all, wasn’t easy to come by for a female owner in a male-dominated business. Professional waiters in fine-dining restaurants were mostly older men. Customers hit on her. Chefs thought they knew more than her. “When I opened Anthos, it was the only Michelin-starred Greek restaurant in the country, so I was getting these accolades,” Arpaia says. “But people had trouble dealing with me. If you look at some of the reviews from back then, they were constantly critiquing my body, my look. The first Zagat review said, ‘Go for the hot owner.’ But my approach was to realize the power of femininity. I was going to be really good and let the work speak for itself.”

Over time, Arpaia’s work ethic, food smarts and TV skills landed her on the Food Network’s Iron Chef America, even as she was still attending culinary school. An instant hit with viewers, she would go on to judge more episodes of Iron Chef America and The Next Iron Chef than anyone else. How she found the time for that and the various acclaimed restaurants—such as Kefi and Mia Dona—she continued to open is anyone’s guess, but she finally found her way into the pizza business. After studying with Neapolitan pizza master Enzo Cocci, she went on to launch the stylish, upscale Prova Pizzabar at Grand Central Terminal in 2016 and opened a second location at the ultra-hip Moxy Hotel near Times Square in 2019. She’s also a spokesperson for Galbani and uses their cheeses in her menu recipes.

Arpaia’s plan from the start was to turn Pizza Provabar into a nationwide quick-service brand. “With that in mind, I had to think about a dough that would work well in high-traffic areas, where there are quick transition times, and that would also appeal to American customers, who like heartier toppings, and, most importantly, would withstand delivery,” she says.

She describes her pizza as a hybrid of the Roman and Neapolitan styles. For her dough, she uses a proprietary blend of ancient grains from Naples. “Roman-style is more of a breadmaker’s pizza, the focaccia style, but I wanted that pizza taste, not the breadmaker taste, and that’s where Neapolitan flour comes in,” Arpaia explains. “My dough has a very high hydration point and a long maturation process—up to three days. I use very little yeast. Those dollar-slice places use a ton of yeast, let it rise quickly and sell it. You eat that slice with a glass of water, and your stomach blows up because that yeast is literally fermenting inside you. When you take a little bit of yeast and let it rise over a few days, it results in a lighter, more digestible dough that’s delicious. We par-bake it and then add the toppings and do the final bake on-site, allowing for consistency and a fast transaction time.”

Prova Pizzabar serves classic pies like the Regina, Funghi, Four Cheese, Chicken Piccata and the Polpette, topped with Arpaia’s famous meatballs. She also likes to incorporate seasonal ingredients into her pies, such as her Pea Pesto Pizza. “In general, you have your classics, but I believe in seasonality,” she says. “I like to always have a couple of specialty pizzas determined by the season, such as a pumpkin pizza in the fall.”

The restaurants’ interior design reflects Arpaia’s own elegant taste. The Moxy Hotel location, for example, boasts a subdued palette, balancing light and dark materials to create a transcendent experience of color and ambience. Its centerpiece is a stunning light sculpture composed of 350 3D-printed LED light shades, which went through nearly 45 digital and physical prototypes, according to New World Design Builders. “The sculpture transforms the space from day to night as a beautiful white chandelier turns Prova into an after-hours eatery bedecked in a full spectrum of rave-worthy colors,” the design firm’s site explains.

“If you look at some of the reviews from back then, they were constantly critiquing my body, my look….But my approach was to realize the power of femininity. I was going to be really good and let the work speak for itself.”
— Donatella Arpaia, Prova Pizzabar

For some restaurateurs, juggling two locations can be a handful, but Arpaia has bigger ambitions. She’s focused on strategic expansion of the Prova Pizzabar brand far beyond the Big Apple. “Grand Central was the perfect place to launch my brand, because not only do you have transient people, it’s also a tourist destination, so I’m exposing my pizza to a lot of different cultures,” she says. “It was a very competitive bid—I beat out hundreds of people to get it.”

She now splits her time between New York and Miami and wants to open a Prova Pizzabar in the latter city. Inspired by the Shake Shack model, she’s looking at airports, high-traffic hubs and iconic locations similar to the Moxy Hotel. “Shake Shack was the answer to Burger King,” she says. “In fast-casual, people expect more now, and I’m trying to give them that with pizza. As much as they’re looking for a user-friendly experience with delivery and pickup, they also want a better dine-in experience.”

In other words, Arpaia has no intention of resting on her celebrity-chef laurels. “When I became well-known on Iron Chef America, I was also going to culinary school full-time,” she says. “I’m a student at heart. With Iron Chef, I was constantly eating the best of the best from the world’s top chefs. One thing I discovered is that they were always learning…as opposed to some chefs who don’t have a tenth of the skills but think they don’t have anything to learn. In this business, if you’re not moving forward, you’re falling behind. It’s too competitive out there.” 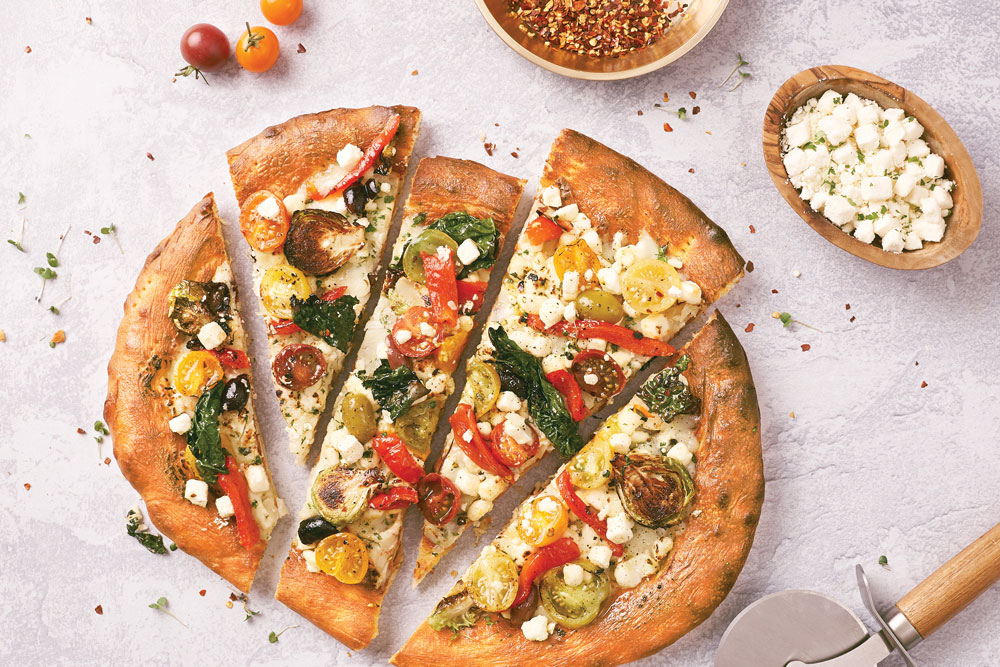