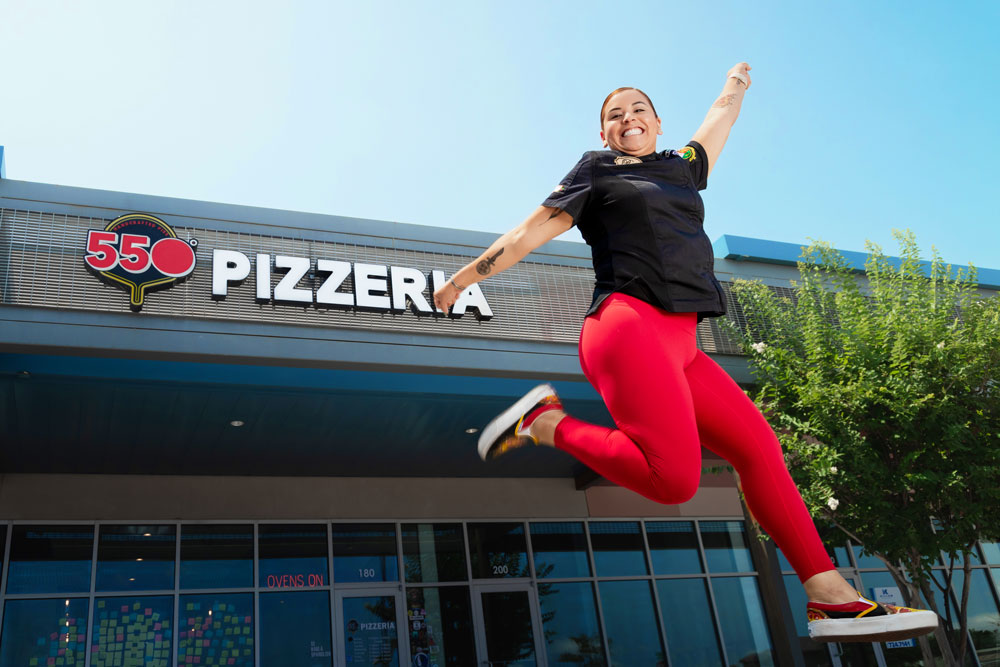 Bonus coverage: In this Q&A, Janet Zapata of 550 Pizzeria talks more about her management style, future goals and why she doesn’t offer delivery.

For Janet Zapata, owner of 550 Pizzeria in Laredo, Texas, faith is a verb—it’s taking action when the odds are against her, when her anxiety kicks in and that little voice keeps telling her she can’t possibly succeed. It’s closing down her first pizzeria after too many disagreements with an inflexible business partner. It’s making pizzas in her home kitchen and hoping someone will buy them. It’s opening a new store in the middle of a pandemic. And it’s shooting off emails and tagging PMQ in her social media posts, again and again, to get featured in the magazine.

And Zapata’s faith keeps paying off. That’s her on this month’s cover. “You have to manifest your dreams and think, ‘You know what? I’m gonna do it.’ And it’s not if I’m going to do it, it’s when,” she says.

Zapata recalls the exact moment when she learned she would be PMQ’s cover star. “I was sitting on the floor with my phone and noticed you had shared one of my pictures on Instagram,” she tells us. “And I said, ‘OK, PMQ, just call me already and tell me you want me on the cover!’ I said that super-loud, and my employees were, like, ‘Dude, it’s going to happen.’ And I’m, like, ‘Yes, in Jesus’ name, he hears you’…and then you messaged me.” 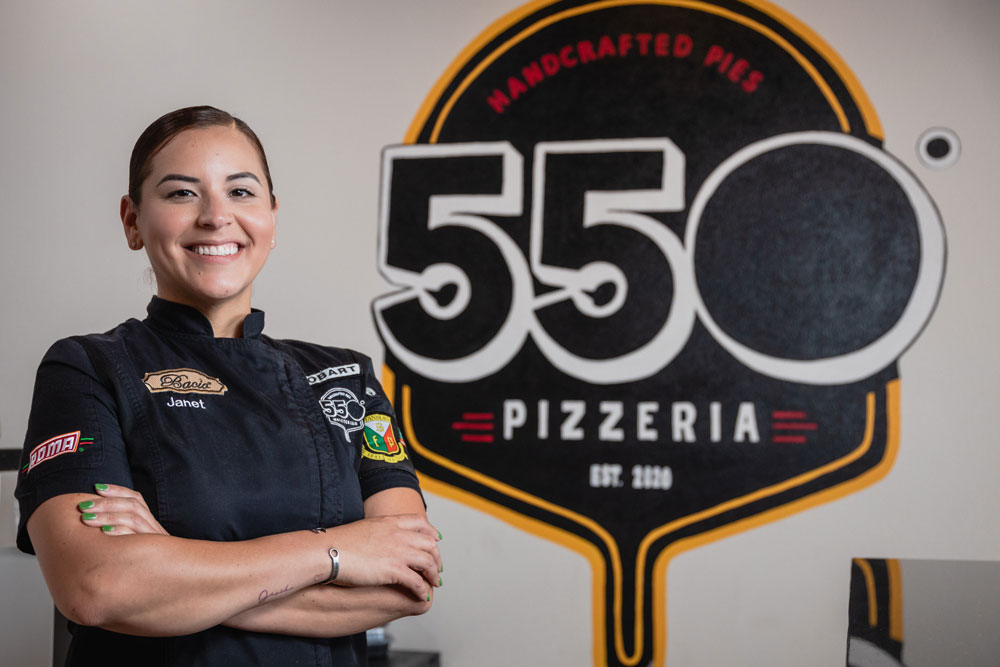 She immediately showed the message to her employees. “They all started clapping and were, like, ‘You see? You see?’ I was, like, ‘I’m here because of you guys—you have helped me so much.’ And, dude, they were all crying.”

Then, they told her to buy a lottery ticket. Maybe she could win $1 million? With faith like Duran’s, you never know.

Even as a little girl, Zapata dreamed of owning a pizzeria. The idea came to her at an Olive Garden restaurant when she was six or seven years old. “I remember sitting there, listening to all the noise, the dishes clanking, people talking and laughing, and I said, ‘Daddy, I want a restaurant.’ And he said, ‘OK, I want you to study hard so you can have the money to do that. What kind of restaurant would you like to have?’ And I’m, like, ‘I want a pizzeria.’”

As a teenager, she took a job as a cashier at a local CiCi’s store. “I hated it, because I hate math,” she recalls. After high school, she went to work for a local TV station—journalism was her other calling. But in the meantime, she hired on—again as a cashier—at a new independent pizzeria called Laredo Pizza Factory, co-owned by Jeff Trevino, who would become her pizza mentor.

She still hated being a cashier, but customers loved her. She’s warm, self-effacing and authentic—wholly incapable, it seems, of putting on airs. “People would ask me, ‘What are you doing [to win over customers]?’ And I was, like, ‘I don’t know!’ I just put myself out there. I’m a very giving person. If I meet you and find out your birthday’s on Friday, get ready. If you need help, I’m gonna help you. I don’t expect it back, because that’s not the point of helping somebody.” 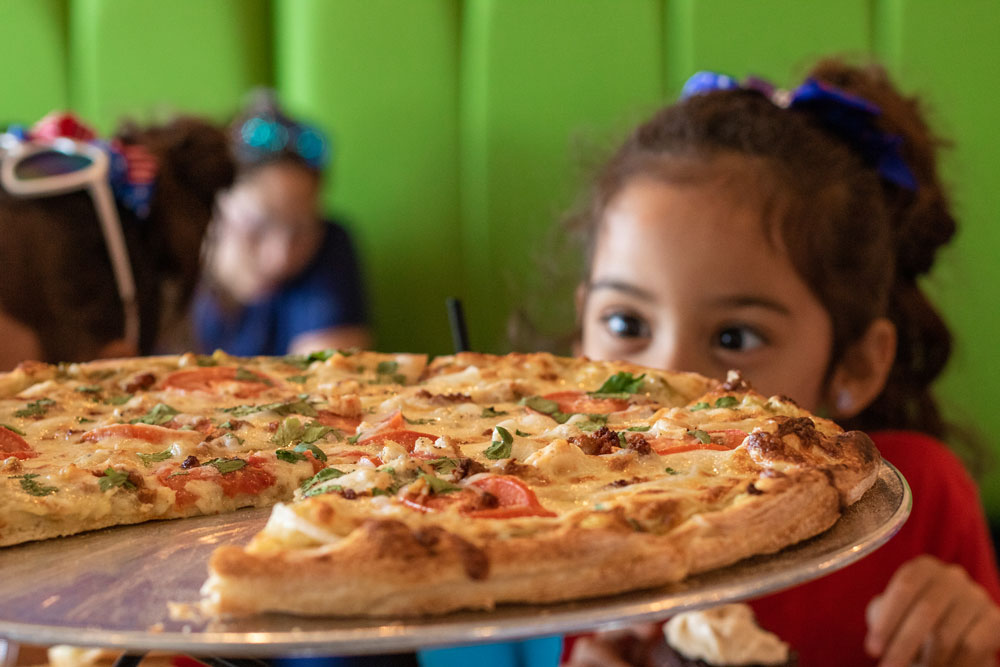 But her male co-workers saw her as just a cashier. “I would watch the guys make pizza, and I was, like, ‘Hey, can I make a pizza?’ And they would say, ‘No, you’re a girl.’”

Trevino knew better. He’d taken note of Zapata’s effortless charm and winsome ways—she’d become an ambassador for his store without even trying—so when Zapata asked to make a pizza for him, he gave her a shot. “Jeff was, like, ‘Dude, what are you doing? You need to be on the line!’ So, little by little, I became a pizza maker. And because I loved that restaurant so much, I started improving it.”

Trevino’s impact on Zapata’s life since then cannot be overstated. He ran with her marketing ideas—summertime coupons for a free 10” pizza for elementary school kids with the purchase of a large pizza; dyeing the dough black to celebrate the much-hyped “blood moon” of 2013; jazzing up the shop’s social media—and assured her she would own a shop herself one day. “He told me, ‘You’re ready for your own pizzeria.’ And my anxiety was, like, no, no, no, not at all! He said, ‘All you need to learn is the business part, and I’ll teach you. From now on, you’re gonna do everything I do every day.’ So he literally stepped back and let me do everything, and people would come in and say, ‘Is the owner here—that girl?’ And Jeff would be, like, ‘Yes, she’s over there.’”

“Jeff [Trevino] was, like, ‘Dude, what are you doing? You need to be on the line!’ So, little by little, I became a pizza maker. And because I loved that restaurant so much, I started improving it.”
— Janet Zapata, 550 Pizzeria

Two Leaps of Faith in One

Trevino urged Zapata to write down every idea she came up with for her own restaurant—knowing that day would be coming sooner than she realized. “He was, like, ‘Girl, manifest that stuff! Write it down in your book,’” Zapata says. And when Trevino decided to move away and open a different restaurant, Acú Bistro Bar, in San Antonio, he sold his half of Laredo Pizza Factory to her. She’d been working there for seven years when she assumed co-ownership,  but her new partner disliked change and fresh ideas. Frustrated, she consulted with Trevino. “He said, ‘Close it down. In a year or two, you’ll have your own shop.’ And I’m, like, ‘Yeah, right, dude—with what money?’”

Taking a huge leap of faith, she shuttered the pizzeria anyway, stayed with her TV job and pondered her next move. And that would be 550 Pizzeria, named for the temperature of the ovens at Laredo Pizza Factory—a number that Trevino emphasized repeatedly to every employee.

First, Zapata made pizzas at home, using a Roccbox oven and later a pizza stone on a grill. Thanks to her popularity among Laredo Pizza Factory customers and her knack for shooting mouthwatering photos and videos, her following on Instagram and Facebook shot through the roof. Everyone in Laredo, it seemed, missed her pizzas. “Man, did that take off!” she recalls. “I had cop cars, border patrol, state troopers, all picking up pizzas at my house. My neighbor came over to ask me if I was selling drugs. I’m, like, ‘No, I sell pizza from home.’”

She also made and personally delivered hundreds of free pizzas for frontline workers during the pandemic, spreading goodwill and earning it in return. It was a big expense she couldn’t really afford, but, again, her faith was strong. “I told my husband, ‘I’m gonna provide food for these people,’ and he said, ‘No, no, no. Don’t do it!’ And I’m, like, ‘I have to. I feel it right here.’” She pointed to her heart. “He was, like, ‘No, no, not right there!’ I said, ‘You know what? God’s gonna give me more.’ And now my husband tells me, ‘I see what God has done for you, and I can only imagine what he will do for other people and what he will continue to do for you.’”

And it was. Zapata opened 550 Pizzeria in June 2020. The pandemic was in full swing. And she didn’t even offer delivery, considered a must for restaurants at the time. That’s two leaps of faith in one. But it was the Laredo community’s love for her that sealed the deal.

Related: Zazas on the Rise in the Windy City 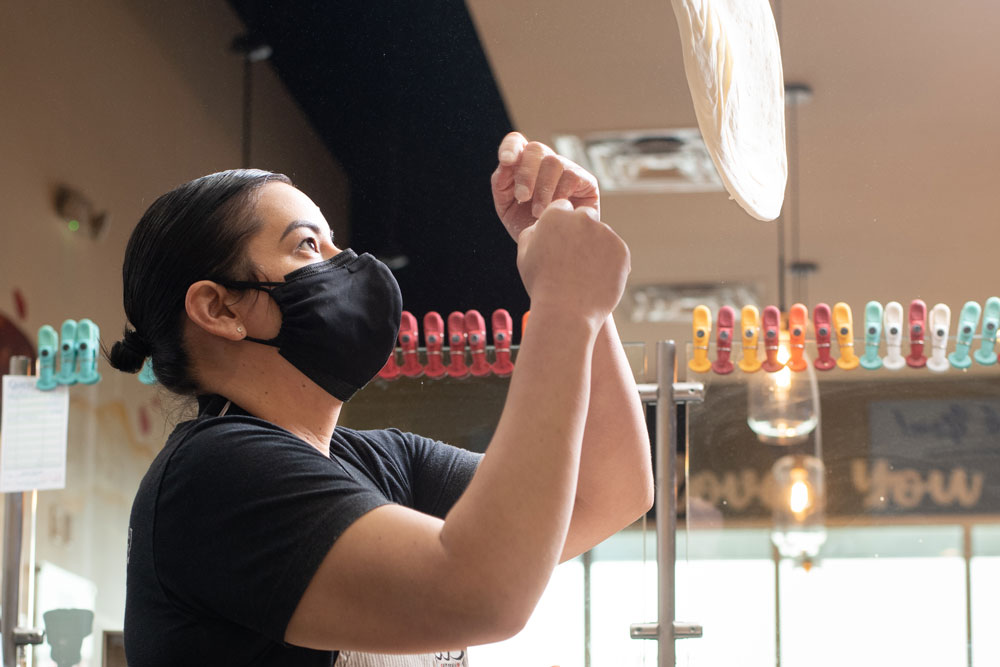 As the 10 a.m. ceremony approached, she was “a nervous wreck.” But the cars kept pulling up, and the crowd kept growing—and not just family and friends. Her congressman was there, plus the county sheriff, the tax collector, and, of course, Trevino himself, the mentor who gave her the confidence to make it all happen.

By 7 p.m., Zapata, who had made 400 doughs for the day, sold out—three hours before closing time—and racked up $7,000 in sales. She opened for a limited time the next day—Father’s Day—but sold out again in just a few hours. The pizza queen of Laredo was off to a promising start.

“I had cop cars, border patrol, state troopers, all picking up pizzas at my house. My neighbor came over to ask me if I was selling drugs. I’m, like, ‘No, I sell pizza from home.’”
— Janet Zapata, 550 Pizzeria

Today, Zapata is set to expand 550 Pizzeria to make more room for customers who can’t get enough of her pies, made in the New York style with a strong Mexican-American influence. Favorites include the Chicken Chori-Queso, featuring a tomatillo sauce, chorizo, chicken, Roma tomatoes, onions and Gorgonzola cheese, and The Jefe, inspired by Trevino and topped with pepperoni, smoked ham, sausage, mushrooms and black olives. The Heatwave, meanwhile, features chorizo, Italian sausage, Tabasco sauce, jalapeños, crushed red pepper and marinated tomatoes.

Zapata is in love with all things Laredo, so she buys her key ingredients exclusively from a local grocery store. “I go there every day and pick out my ingredients,” she says. “I buy chicken, bacon, ham, chorizo, sun-dried tomatoes, Gorgonzola. I make everything with love and the best ingredients.”

She’s also brought to life all of those ideas she used to jot down in her notebook, from the decor to the marketing. She uses a marketing agency—local, of course—to shoot professional-quality photos of the pizzas and build her brand. Her website spotlights the many glowing reviews she receives on Google. She features her employees in social media posts because she is genuinely proud of them, and every post bears the #LareDough hashtag because, well, did we mention she loves her hometown?

And one more thing: The day after Zapata learned she would be the star of PMQ’s August cover, she got more good news: Readers of the Laredo Morning Times had selected her as the city’s best chef and 550 Pizzeria as the city’s best restaurant. As usual, despite her strong faith, she was taken aback. “I was sitting there with a lady doing my nails when they told me, and I was, like, ‘What? What?’ I was in awe. It was super-surreal.”

Throughout her journey of faith and pizza entrepreneurship, Zapata has continued to deal with anxiety and sees a therapist to cope with it. “It’s hard to believe in yourself all the time. Sometimes I don’t, and in the beginning, I didn’t,” she says. “But you have to remind yourself: Who else is gonna push you? Others can tell you and tell you, but you have to push yourself. Even when you don’t want to believe in yourself, you have to push yourself because anything is possible.

“I never thought I would have my own pizzeria,” she adds. “Never, never, never. It was just a thought when I was little and then in my teenage years…you know what I mean? Then, when I worked at Laredo Pizza Factory, I was like, ‘Man, this is just so cool. Man, if I had a restaurant, it would be like this and this.’ And now it’s like that.”

Note: This story has been edited since its original print and online publication to reflect the change of Janet’s last name to Zapata.