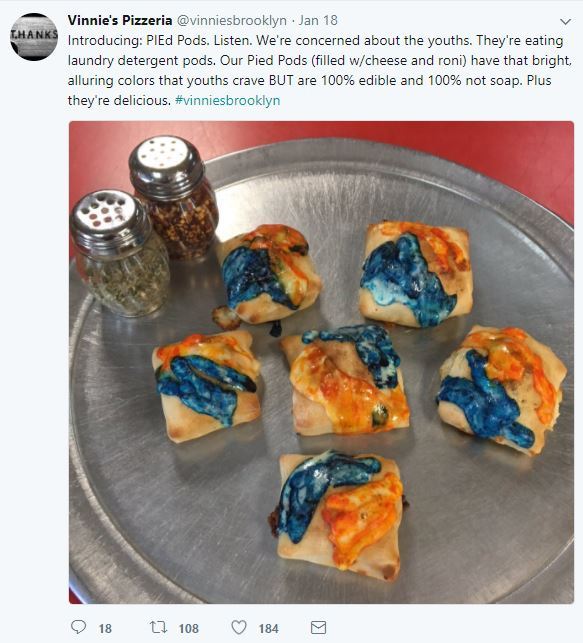 We're all exposed to hundreds of news stories everyday, whether through the TV, radio or social media. There are usually a couple crazy stories that stand out–and often stick around.

One great example as of late has been the Tide Pod Challenge. Somehow, teens got it in their heads that it would be "cool" to film themselves eating colorful (albeit poisonous) pods of laundry detergent.

Instead of just calling those kids crazy and walking away, one forward-thinking pizzeria operator in Brooklyn decided to take advantage of the fact that Tide Pods were all over the news and social media.

According to Fox43 News, and more than a dozen other news outlets (how's that for some free publicity?) Vinnie's Pizzeria created PIEd Pods, which are pizza rolls stuffed with cheese and pepperoni and then dyed to look like the (irresistible?) laundry detergent pods.

Next time you see something interesting, funny, or downright crazy in the news, think about how you can turn it into a pizza promotion. Just make sure to jump on it when it's still hot so you can use all of the same hashtags, etc., and catch the attention of local and national news.

Speaking of the news, the Super Bowl is coming up this weekend, and most pizzerias will want to use the game to promote specials, watch parties and more. However, a lawyer speaking to Small Business Trends says to avoid mentioning the actual name of the event and the teams at all costs. The teams are copyrighted and your business could be sued. Instead, refer to Sunday as "The Big Game" or something that won't get you in hot water with NFL officials.