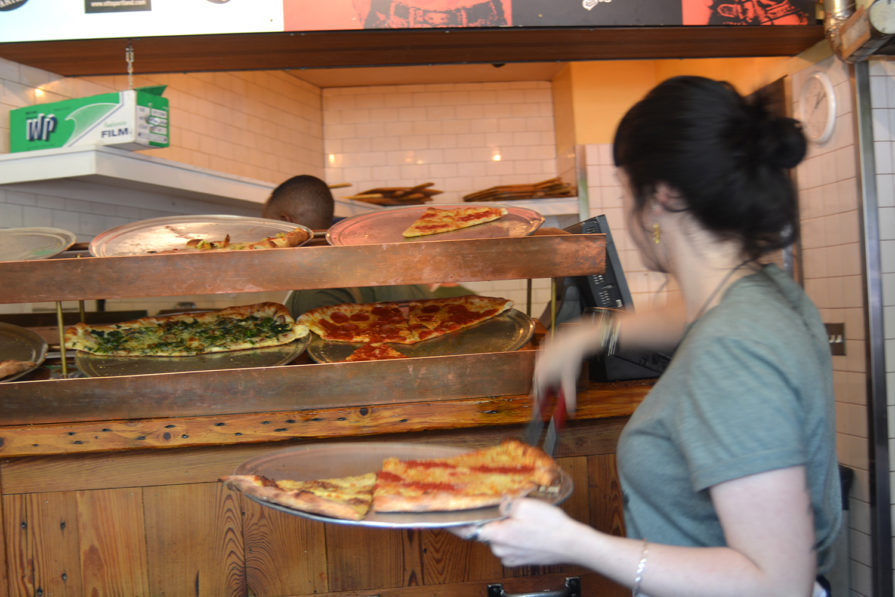 I thought I knew everything about New England cuisine. I lived in the Boston area for more than 20 years, and during the summer before my husband and I moved away, I consumed a minimum of two lobsters and a clam roll per week.

However, I ate more than seafood when I lived in Boston. In fact, when asked which food we wanted for our "last meal" in Boston, my husband and I said it had to be pizza—specifically Armando's Pizza on Huron Street in Cambridge. Our friends were happy to oblige.

For the past two summers, I’ve returned to Boston—this time as a professional working in the pizza industry.

During these past two trips, in addition to revisiting the pizza joints in my old neighborhoods of Cambridge and Somerville, I’ve also explored new places that serve pizzas I've never had before.

While it's hard to take notes while eating delicious pizza, I did want to share some of my thoughts from these pizza trips with you.

Mamma Lisa’s is the epitome of “old school.” When I chatted with the guys making the pies and asked their names, they answered, “This is Tony, I'm Sal and this is Vinny–ya know, good Irish names.” We’ve always ordered Sicilian pizza when we go here (a square of pillowy goodness that melts in your mouth). However, after reading reviews, I think next time I'll be trying the Italian.

About a block away from Mamma Lisa’s is an unassuming pizza place called Pini’s.The slices are huge, and send grease running down your arm (as a good slice should). At $2 per cheese slice, or $12 for a large cheese, this was often a go-to choice for dinner. Pini’s has been known to deliver to the neighborhood even during a snow storm! 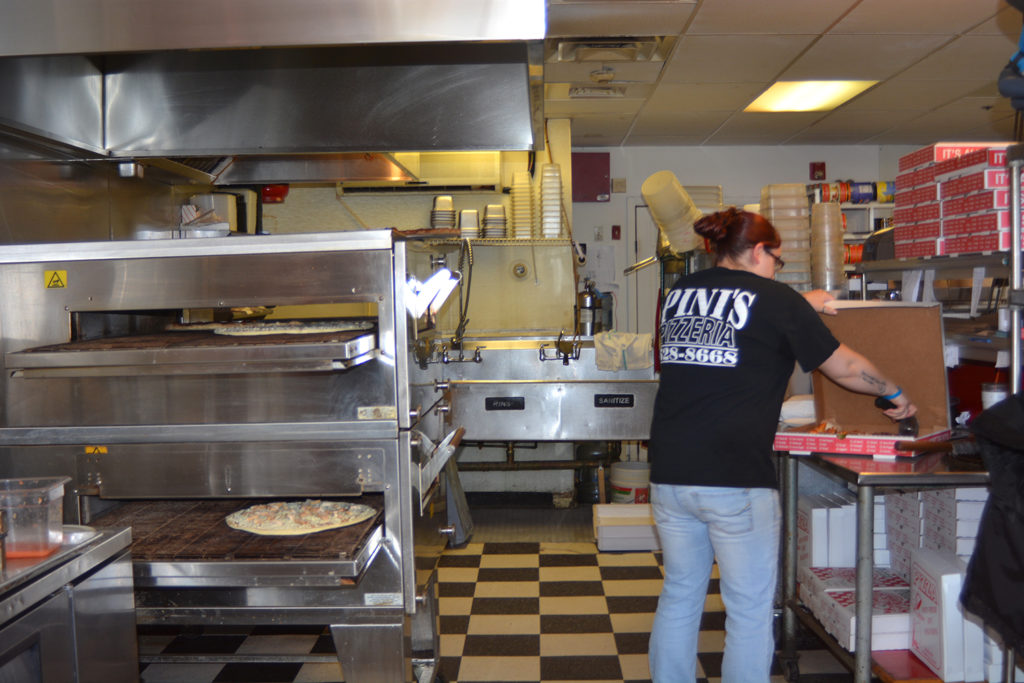 Armando’s is probably at the top of the list for many Cambridge and Somerville residents. Another old school pizzeria with traditional slices, worth going out of your way for. This pizzeria is popular with the take-out crowd; at least 10 take-out orders were picked up while I was in the shop. And, as you can see from my photo, I almost forgot to get a pic of my slice before devouring it. Sadly, this is a recurring theme with me. 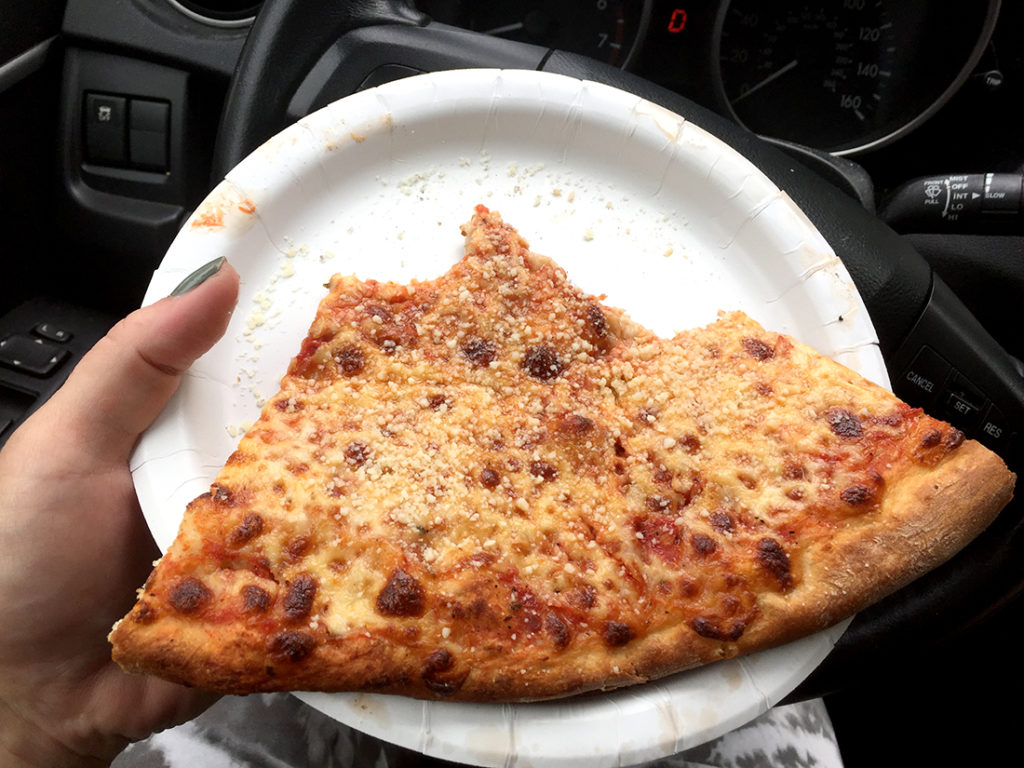 NEW KIDS ON THE BLOCK

PMQ editor Rick Hynum heard about this relatively new restaurant, with a really new take on pizza. Grilled crust? Avocado oil? This was not the Boston pizza I was used to, but it sounded pretty yummy. And then I saw that they had a location in Davis Square, another neighborhood I lived in, a haven for artists and musicians, and now cool pizza places apparently. I was able to meet up with Tianna Tarquinio, Oath's marketing manager and Mike Hazen, head of culinary, to get the scoop on Oath’s unique pies.

Down the road from Oath in Harvard Square is a Portland, Maine-based pizza chain called Otto Pizza. And when I say in Harvard Square, I mean right across from the big Ivy League gates. This was the place recommended most when friends found out I work for a pizza magazine.Take-out only, this place has a hip vibe and unique pizza to back it up. I got a slice of pork and mango and was blown away by the flavor (note my signature bite-already-taken photo). 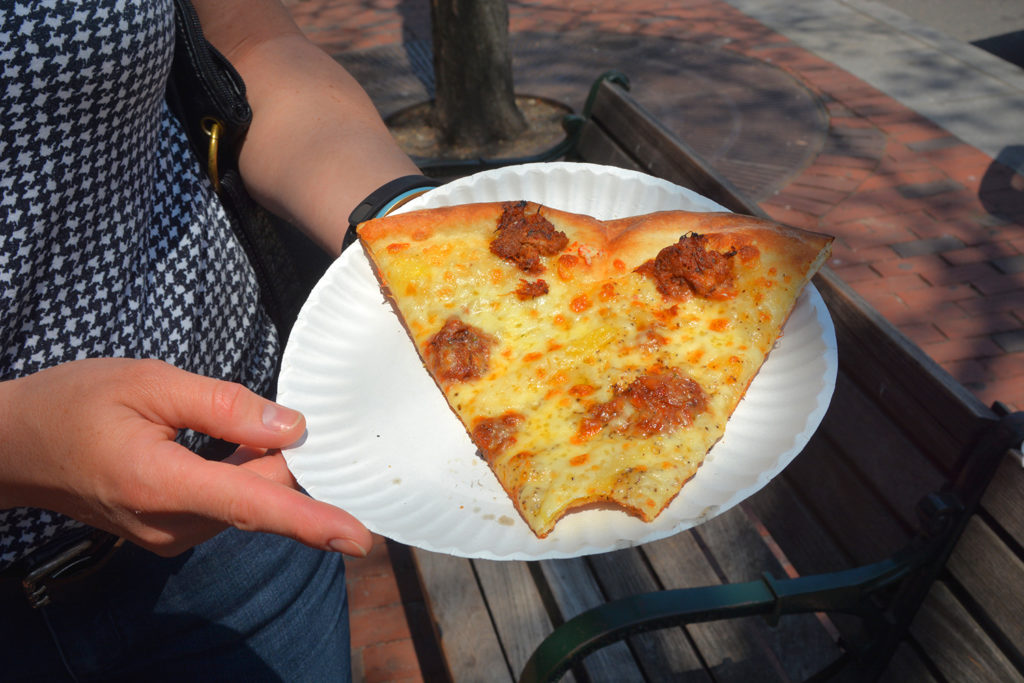 So, it's not Boston, but it is New England, and that's close enough when it comes to pizza. About an hour and a half away in Providence, Rhode Island, we visited Billy Manzo at Federal Hill. This was a totally different pizza experience than I'd had in my years as a Bostonian, mostly buying slices from places with only take out. From the location itself, to the pizza, to hanging with Billy Manzo, this was an experience, as you’ll see in the video!

The first annual Boston Pizza Festival did not disappoint. During the two-day event, almost 30,000 pizza lovers made their way to City Hall Plaza. PMQ’s 20-foot pizza balloon was the beacon for tourists in Faneuil Hall, alerting them to the deliciousness beyond.