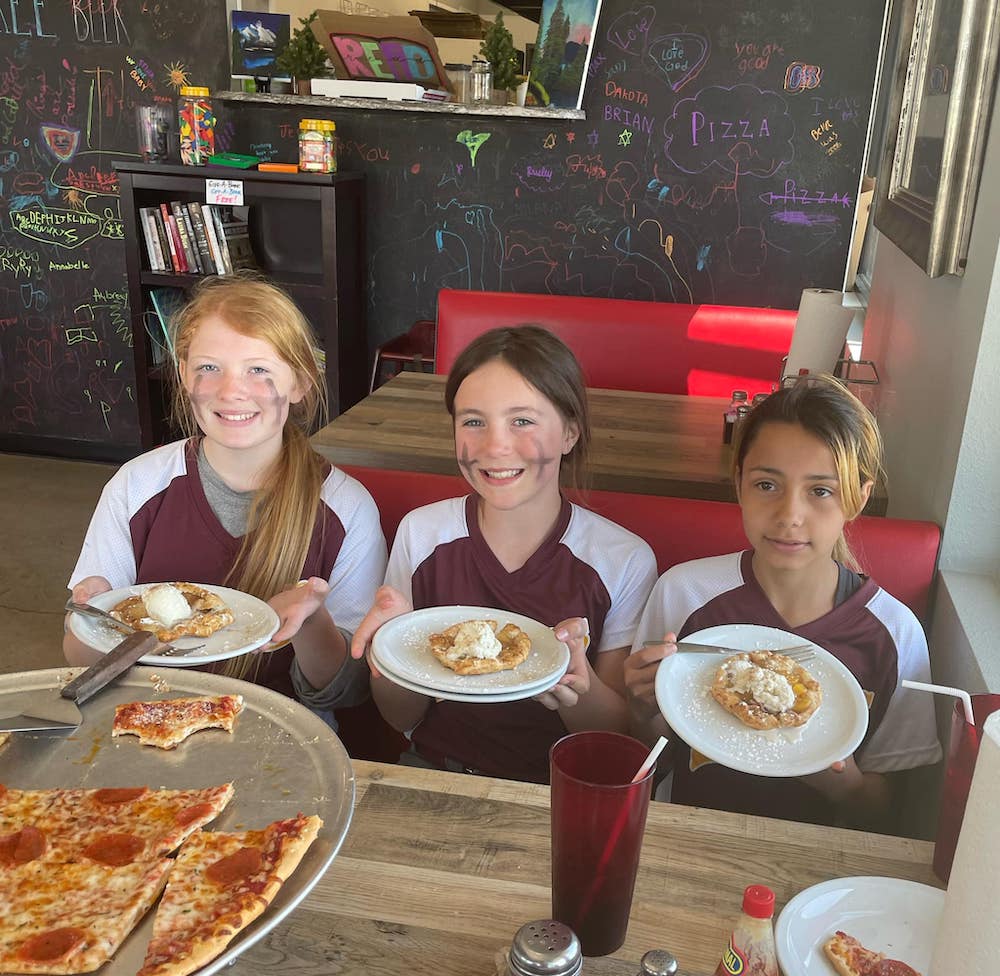 Athletes from Whitewright's area schools get free desserts when they show up wearing their team uniforms.

Related: This WWI veteran’s pizza recipes have survived for 85 years

Terry Boesch could have come up with a catchier name for his pizzeria in Whitewright, Texas. Something Italian-sounding, maybe, or perhaps alliterative and a tad egocentric, like Terry’s Texoma Pizza—after all, the little town of 1,600 is located on the Texas-Oklahoma border. But, no, he simply called it Whitewright Pizza. And judging from his restaurant’s community-focused marketing efforts, that’s because Whitewright Pizza is all about, well, Whitewright.

The PR-savvy Boesch has also demonstrated that giving back to the community can earn positive TV coverage even for an independent pizza shop in a tiny town like Whitewright. And when he’s not making news, he’s still showing his love for Whitewright in social media promotions on Facebook, where he’s got 1,138 followers, which is almost as many people as the town itself has.

Boesch, an Army veteran, and his family took over the former Romano’s Pizza Café in November 2021, renamed it, and quickly turned it into a home away from home for his customers.

He’s also making Whitewright Pizza a household name around North Texas. In March alone, Boesch has made three appearances on TV station KTEN’s local news broadcasts, chatting with anchors and reporters about various promotions that build a sense of community and belonging.

In early March, Boesh gave away free pizza to the first 50 kids who came into his store and recited the Gettysburg Address in full. “It’s 272 words that are probably the best-known speech in American history,” Boesch told KTEN. “From my perspective, the best thing we can do is to teach young people to love our country, so if I can leverage a free pizza to help do that, then it’s an honor for me.”

That promotion continues through May 1. Boesch even made an exception to his kids-only rule when a 64-year-old woman showed up to recite President Lincoln’s historic speech.

Related: How to create a streamlined online ordering system

Meanwhile, Whitewright Pizza is sponsoring the upcoming Run Like a Fool 5K Fun Run/Walk. The pizzeria also offers a mini-library of free books for its guests to encourage reading and literacy. Every student-athlete who shows up at the pizzeria in their uniform gets a free dessert with their pie. In February, Boesch closed his restaurant down due to bad weather, but his team still spent some time feeding the staff at Clyde W. Kosper Texas State Veterans Home.

On January 26, Boesch, a recycling advocate, asked his Facebook followers to make suggestions for recycling or reusing hundreds of printed customer tickets rather than adding them to the local landfill. That post garnered 13 comments from Whitewright Pizza fans and again showed Boesch’s commitment to improving his community. 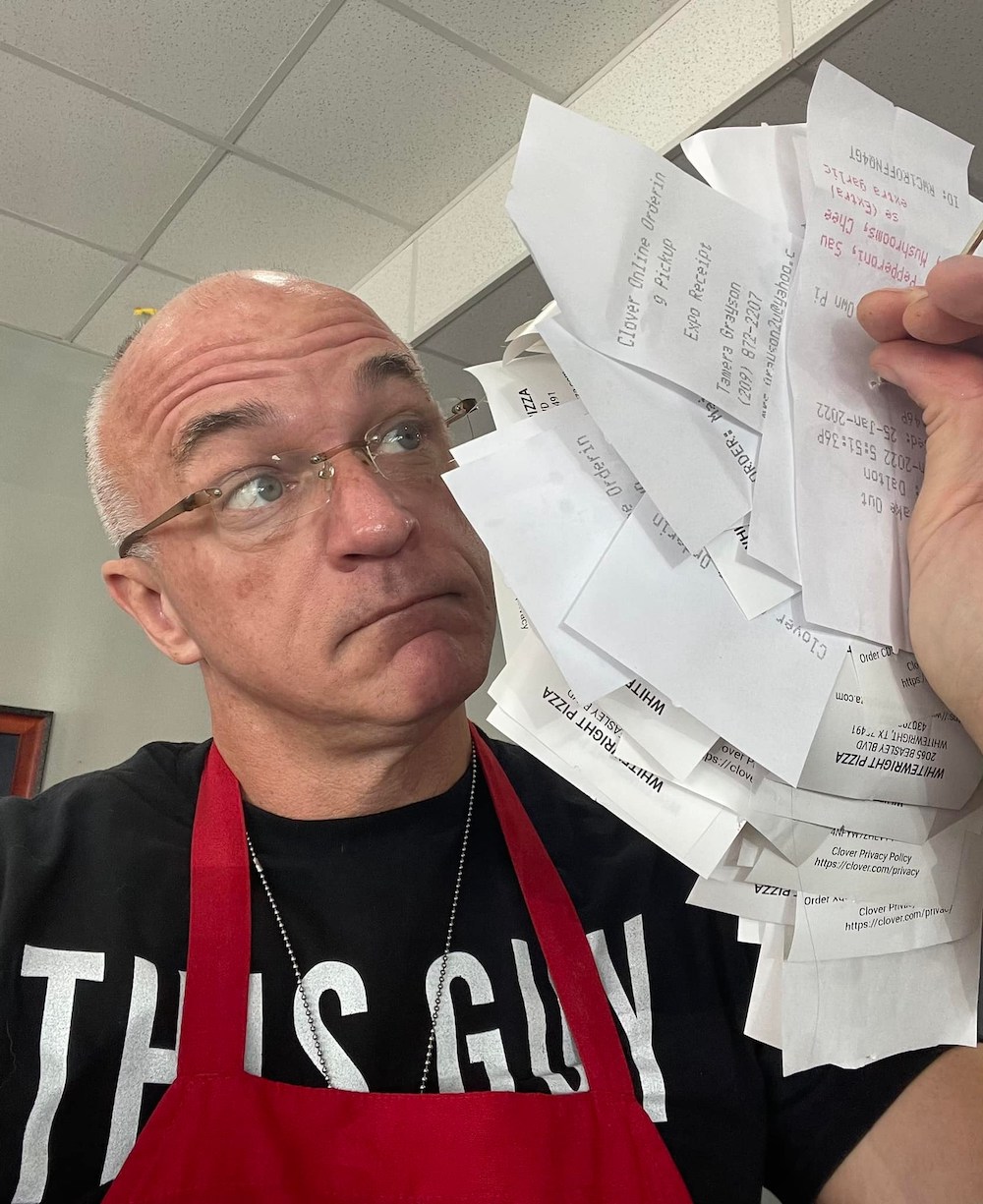 In mid-March, Boesch, whose wife hails from Ukraine, created a pizza special to raise funds for refugees impacted by Russia’s invasion of that country.

Featuring a garlic-butter crust, kielbasa sausage, mashed potatoes and a dill seasoning blend, Boesch called it “the most important pizza you could ever order.”

“I did not want a perfect round pizza shape, because nothing in Ukraine right now is perfect and round,” Boesch said in another KTEN interview on March 16. “Everything is in disarray. What came to me was this image of hands being open … hands open for us to help.”

While that fundraiser continues, Boesch has added another promotion, the First Responder Feast, celebrating Texoma first responders. He has been asking customers, local agencies and businesses to sponsor 13 tables, each of which seats four people, that will be reserved for first responders from the surrounding area on Sunday, April 4. Boesch wants to “bust the bellies” of 52 first responders in all, with sponsorships selling for $60 per table.

In addition to yet another heartfelt interview on KTEN this past weekend, Boesch promoted the First Responder Feast with a 2 ½-minute video posted on Facebook on March 24. “I have worn the uniform of our nation’s military, but I have never worn the helmet or the badge or the stethoscope of a first responder,” Boesh said in the video. “And yet for the past three months I have been overwhelmed [by] just how many times first responders all over Texoma have saved us. They’ve saved us through freezes, they’ve saved us through fires, they’ve saved us through tornadoes and these horrible motor vehicle accidents we hear about all over Oklahoma and North Texas. It dawned on me [that] I want to do something really huge and big to show great appreciation for our first responders … I’m bringing out every person on my staff to help in this.”

Boesch said he wants to feed first responders from across a 50-mile radius of Whitewright. “I’m willing to not make a penny off this,” Boesch said, “but I just spent $1,300 helping people in Ukraine, so if I can just break even on food costs and my labor, I’m more than willing—and happily so—to help these first responders.”

Boesch’s success with the local media isn’t his only recent triumph. In February, he hired away Justin Murphy, who had 10 years of experience managing Domino’s franchise restaurants, just as Murphy was gearing up to open a new Domino’s store in Whitewright. “Whitewright Pizza is the much better pizza by far and a family environment Domino’s can’t copy,” Murphy said in a February 15 Facebook post.