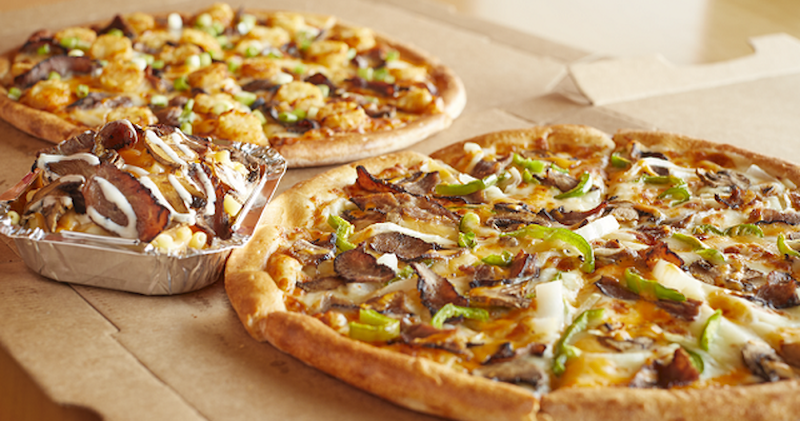 Toppers Pizza, headquartered in Whitewater, Wisconsin, has expanded its menu to include two new pizzas topped with an unusually choice cut of beef: prime rib.

In a Facebook post, Toppers said the Steak ‘N Taters pizza “is just like mom used to make it, but only if your mom used to put all this stuff on a pizza. In which case, that’s incredibly foretelling, and we may owe her some kind of royalty payment.”

These new carnivore-friendly items arrive on the heels of Toppers’ Vegan Topperstix, a dairy-free and vegan-friendly alternative to the chain’s regular Topperstix.

Toppers introduced the new vegan item on January 11 with an ill-considered Facebook post that backfired to some extent. “Recently, we’ve received feedback about our new in-store dairy cows. You spoke. We listened. In fact, we listened so hard that we’re just getting rid of dairy all together. There’s no more dairy in anything anymore. Our cheesy, buttery, garlicky vegan Topperstix are now available for all.”

Not surprisingly, some Facebook users took the post seriously and assumed the company was no longer offering any dairy products, and Toppers had to quickly backtrack. In a follow-up post on January 16, the company noted, “While many took this joke in stride and generally handled it with a pretty chill attitude, others found their entire worldviews crashing down. Clearly, cheesy jokes are one thing, but joking about cheese is a whole ‘nother basket of curds. That’s why today … we’re pledging to never, ever joke about getting rid of dairy again. The next time you see anything about cheese not being here, you’ll know it’s the real deal. But, with your help, that day will never come.”