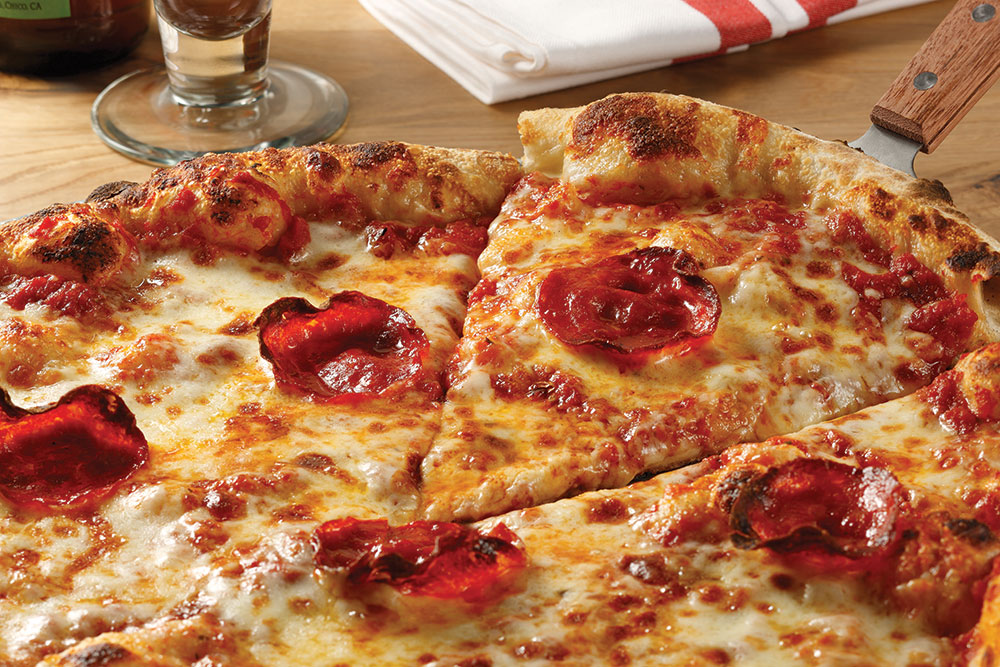 Perhaps it’s impossible to explain the hows and whys behind individual tastes in food—and that definitely holds true for pizza. Some people swear by hefty deep-dish or doughy pan styles, while others crave cracker-thin, Neapolitan, New York-style, or something off the beaten pizza path. But whatever results you desire, there are plenty of ways to infuse more flavor into your finished crusts, whether through the baking process, prep, mixing, dough additives and more. Here, PMQ chats with operators who subscribe to a wide variety of pizza styles to find out how they ensure the most flavorful crusts possible.

Most operators would agree: Great pizza begins with top-notch ingredients. When CraftWorks Restaurants and Breweries, which operates the Old Chicago Pizza & Taproom (oldchicago.com) chain, with nearly 100 locations nationwide and headquarters in Chattanooga, Tennessee, and Bloomfield, Colorado, recently revamped its decades-old dough recipes, the first step was selecting a better flour. “With today’s focus on health and nutrition, we sought out a flour with no enzymes or additives that’s made from a single ingredient: wheat,” says Mike Thom, senior director of CraftWorks. With several different styles of pizza and baked goods on the menu, the pizzeria now uses two flours: one with a lower protein content, used for its tavern-style thin-crust and ciabatta bread, and one with a higher protein content, ideal for Chicago-style pizzas and calzone dough.

Will Bingham, owner of The Pizza Peel and Tap Room (tapandpeel.com) in Charlotte, North Carolina, used to offer both white and wheat pizzas at his operation, but now he fuses the two into one signature crust—creating his dough with white high-gluten and wheat flours to create “more body” in the finished product.

Shawn McClain, chef and managing partner at Five50 Pizza Bar (arialasvegas.com/dining/restaurants/five50) in Las Vegas, developed his own hybrid crust, but instead of combining flours, he merged Neapolitan and New York styles. “We combined dry yeast and a starter, plus a little olive oil,” he recalls. “We wanted the dough to have a little air and texture. The starter helps with the maturation process and flavor profile-building, and the dry yeast acts as a stabilizer so we’re not at the whim of the elements, as you’d be with a strictly starter dough.” In addition, high-quality ingredients—including fresh-milled flour from a San Francisco-based supplier—are an important part of the process for great crusts at Five50.

2. Rising to the Occasion

Neapolitan-style dough is known for its signature light texture, crispy exterior and chewy interior. The secret, according to Matteo Schiavone, executive chef at Pomo Pizzeria Napoletana (pomopizzeria.com), with two locations in Phoenix and Scottsdale, Arizona, is double fermentation. “It’s very important to raise the dough twice, for four hours and then again (after balling) for eight to 12 hours—it’s a process!” he says. “Raising the dough too quickly makes the pizza heavy, and warm temperatures make the dough rise faster; we put the dough in the walk-in, and then the second fermentation is done at 70° to 75° for a soft dough.”

Chef Joseph Boness, owner of Vella Pizza (vellapizza.com), a mobile pizzeria based in Redondo Beach, California, adheres to a Neapolitan-inspired style, but he has made his own tweaks to the traditional Italian format. For operators who want to experiment with a slower rise for their dough, he suggests the following: Try a double fermentation process, then reserve a cup of the finished dough in the freezer. When making the next dough batch, bring the frozen dough to room temperature, then add it to your new dough batch. “That dough has developed completely, and there’s a huge difference in fast-rising dough, with a lot of yeast, versus a slow rise,” he explains. “You get more strength and elasticity out of the dough, and it’s easier to work with by hand.” The formula he recommends: 4 ounces of old dough for each quart of new dough.

To experiment with the double fermentation process, Boness says, try using 1/10 of the amount of yeast and work two days ahead. Work in small batches and play around with ratios; for a batch that will create 100 8-ounce dough balls, try 5 grams of yeast; letting it rise slowly over a couple of days will impart more chewiness and better flavor. “You can even play around with adding leftover dough instead of yeast,” he says. “If you start today, you can eventually have yeast strains that are five years old—which can also be a marketing point.”

Indeed, during the dough revamp at Old Chicago, one major tweak involved allowing for a slower development process, which, according to Thom, results in bigger flavor and better-tasting results. Part of this change required a switch from instant yeast to dry active yeast, and now the Chicago-style dough, for example, has a 24- to 48-hour development time. At Five50, McClain adheres to a three-day process—a 24-hour fermentation, followed by balling and cooling for 48 hours.

“Quality of ingredients is the most important factor in a flavorful crust. Proofing the dough allows it to rise properly, ensuring that you have the correct texture to impart the desired flavor”
—Mark Snyder, ItalCrust Wood Fired Pizza Crusts

3. The Joy of Baking

Chefs at Pomo, true to Neapolitan style, cook their pizzas in a 900° oven, creating what Schiavone refers to as “leopard skin” on the pizza—spots of char that lend a seductively smoky characteristic to the finished pie. McClain works with combination fire-deck ovens; the decks maintain a consistent cooking surface temperature, but he can also add apricot wood for smoke, top heat and color. Crunchy crusts at The Pizza Peel also stem from a high-heat oven—about 600°—and a longer bake. “The hotter the better—this gives the crust some extra crunch, plus nice browning and caramelization,” says Bingham.

Also see: Learn how to use your pizza oven to expand your menu and generate blazing-hot profits

However, utilizing certain dough recipes can also allow for other types of ovens, such as conveyors and convections, to create crispier outcomes. At Old Chicago, its tavern-style dough is proofed quickly, then baked to set the crust, adding a little height to the dough and some airiness. Because this dough style has a lot of yeast and is very fast-rising, a brief time in the oven sets the structure to give it a crispy, crunchy texture (and, to maintain this effect, the pizza is served on a wire rack ¼” above the pan for improved airflow and no sogginess).

While dough may, in its simplest form, require only a few ingredients, there are also ways to boost flavor through additives. Old Chicago adds powdered egg white to the dough used for its calzones, pepperoni rolls and stromboli, which adds a “great crispy texture and hearth-baked color,” Thom says. Meanwhile, its ciabatta dough (a wet dough formed into 18” loaves) creates all of the garlic breads for salads, pastas, bruschetta and dips and is brushed with egg white mixture, then sprinkled with kosher salt to bring out the flavors in the bread. For tavern-style pizzas, which have enjoyed a surge of popularity since being introduced on the menu, Asiago cheese is sprinkled around the outside edge of the crust to impart a nutty taste as it browns in the oven. Finally, for the Chicago-style crust, oil in the bottom of the pans, plus a brush with clarified butter, gives a deep-fried texture. “Customers today really appreciate a depth of flavors and textures,” Thom says.

Boness notes that adding oil to the dough during initial mixing can help add strength and make it easier to work with, but he doesn’t advocate “drowning” the dough in oil—simply let the mixture turn two to three times in the mixer while adding a slow drizzle. You can also experiment with adding starter cultures—mix a cup each of flour and water and put the mixture in the refrigerator. “It’ll change each day, getting denser, then thinner,” says Boness. “Once it thins, it’s time to feed it—a tablespoon of flour each day.” This starter culture can then be added to your dough recipe; simply replace any used starter with flour.

Meanwhile, some pizzeria chefs have a definitive sweet spot—adding ingredients such as honey or sugar to their dough. Bingham uses molasses in his dough recipe, which, he says, lends a unique flavor profile. “The molasses creates caramelization, leading to a darker bake,” he notes. “And it helps in fermentation, because it takes longer for the yeast to break down molasses than sugar.” Adding olive oil to his dough also lends extra flavor so that the dough never gets “cardboard-y,” he says—even after the pizza cools, the oil helps the crust retain its flavor and texture when reheated.

Finally, some pizzerias are very particular about their mixing strategies—often a concern for those who take their inspiration from Neapolitan styles. Pomo Pizzeria uses an imported mixer from Italy that has a fork-like (instead of spiral) attachment to handle the dough gently—thus making the finished product light, puffy and more digestible. Five50 utilizes mixers that are programmed to have rest time built into the process, and air is retained in the dough through proper hand-stretching technique. “In New York-style pies, pizza makers may push air out of the dough when they stretch it, leading to the thin crust and thin edges on these pizzas,” McClain says. “Instead, we keep a 3/4” edge and pull the dough rather than pushing the dough down on a table; our method traps air inside, allowing for more chew versus a denser finished product.”

Also see: Choose the right piece of equipment for the right type of pizza

The old boxing adage says, “Styles make fights,” but there’s no reason to argue about the merits of one pizza style over another as long as you select the best ingredients and prep procedures to ensure the most flavorful product for customers. Although many may claim to know the “secret” of creating the perfect pizza dough, perhaps the real secret is simply to not be afraid of experimentation. After all, even massive chains like Old Chicago and Domino’s (dominos.com) recently realized a need to keep up with the times and try out new recipes to remain relevant to their customer bases. What new tweaks will you try next?