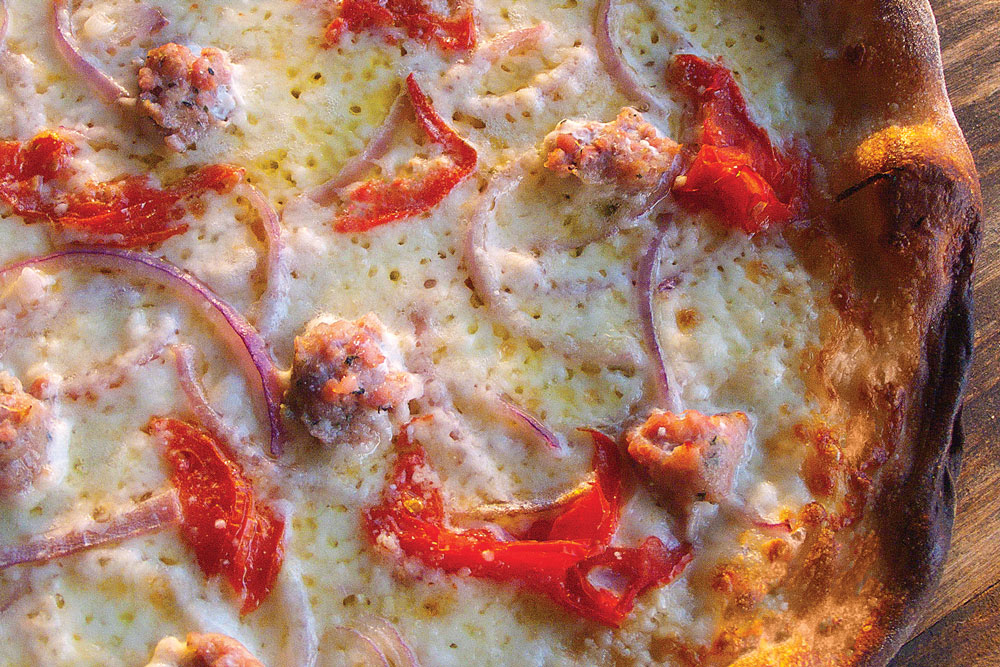 Ask any Italian for his secret to delicious pizza preparation, and he will likely stress simple, flavorful, high-quality ingredients—a different approach than many Stateside pizza chefs, who often go by the American credo “bigger is better” and pile on the toppings. Granted, many of your customers won’t settle for anything less than a fully loaded Supreme pie, but you can also make delicious and unique specialty pizzas with just three toppings, thus holding down your food costs and maximizing profitability.

Simpler is often smarter, notes Italian-born Leonardo Landini, owner of Landini’s Pizzeria in San Diego. “The more toppings you add, the more you lose the flavors of each ingredient,” he explains. “When there are too many flavors happening at once, the customer doesn’t enjoy any one thing.”

For some pizza makers, three is the tastiest number. We talked to several who feature deliciously simple three-topping pies on their menus and got their tips for creating unique specialty pizzas without piling on the expensive meats and veggies.

In terms of three-topping combos, mushrooms pair deliciously with pineapple and ham for a twist on the Hawaiian and with black olives and feta cheese for a specialty Greek pizza.
—Pete Wilder, To-Jo Mushrooms

Start in Your Own Kitchen

When Landini wants to whip up a new recipe for his menu, he doesn’t venture far to find the ingredients. “From an owner’s point of view, it’s best to look at what you already have in-house,” he says. “You keep costs down by working with ingredients you’re already using.” For example, when Landini noticed he was using Brussels sprouts for a salad and pancetta for a specialty pie, he multipurposed both for a pizza—called the Rustica—that combines the two ingredients with a balsamic vinegar reduction on a white pie base. Recently, he dreamed up a new menu item, pastizza, by simply filling two layers of his dough with pasta in the middle, creating a product that’s similar to focaccia and is already heating up sales—even though Landini laughingly calls it a “calorie bomb.”

Related: Simplicity is the rule for culinary expert Mario Rizzotti

Pizzeria operators overseas have been rethinking the pizza making craft for years. Pepperoni and mushrooms isn’t enough for connoisseurs in Brazil, where crave-worthy toppings include green peas, beets and quail eggs. Meanwhile, Pizza Hut raised British eyebrows in 2012 with its unusual hot dog-stuffed crusts (drizzled in mustard, no less). Americans have recently begun following suit, bending the rules and creating unique topping combinations inspired by fast-food favorites. At the New York-based Ribalta, for example, the Americana pizza is topped with hot dogs, mozzarella and French fries. This combo—while perennially popular in ballparks across the country—is unique enough on a pizza to warrant plenty of attention, including from the media: The popular food-focused website Eater published an article on the pizza in December 2014, with the buzz-building headline, “Ribalta Has Perfected the Art of Hot Dog and French Fry Pizza.”

Across the country at Landini’s, the classic American wiener inspired another pizza original: The Maialona combines hot dogs, hot salami and Italian sausage for an oinking extravaganza. “People in America love meat, especially hot dogs,” Landini says. “‘Maialona’ translates to ‘big pig’ in Italian, and this has everything people love on one pie. Plus, the hot dog pairs surprisingly well with our crust.” Call it an Italian-inspired “bun.”

Alternatively, you might jazz up a hot dog-based pie with traditional condiments, such as ketchup, mustard or relish. Or top burger-themed pizzas with pickles and onions. By considering the nonpizza foods that are popular in American culture (or by looking at popular flavor/ingredient combos from other countries), you’ll find no shortage of inspiration.

“Intense flavors seem to be spreading. Bold sauces and strong seasonings have emerged from Texas and Louisiana and are more in demand nationwide as the consumer craves more flavor.”
—Vincent Todaro, Todarini Foods

Highlighting the Unique or Unusual

Landini loves the blend of sweet and spicy, or sweet and bitter, when creating his specialty pies; for example, he may combine spicy jalapeños, creamy ricotta and sweet pineapple on a pie. Meanwhile, textural variety can be accomplished through the addition of crunchy elements, such as nuts or, for a dessert pizza, crumbled biscotti.

Justin De Leon, owner of Apollonia’s Pizzeria in Los Angeles, showcases his most unique ingredients on simple pies so that the “star” can stand out. “Complement and contrast, but if you have something really unique on a pizza, you want to give it the spotlight,” De Leon says. “You need to know when enough is enough—consider what you really need on the pizza without going overboard. Step back and ask, ‘What am I trying to achieve?’” And, if you find that you’ve gone awry on one combination, keep experimenting; often an ingredient that clashes with certain flavors or textures will pair seamlessly with another.

De Leon, a photographer and artist, likes his menu items to tell a story—and his most unique pie, The Dirty Agent, tells a tale that all locals can understand. Because he’s based in Los Angeles’ entertainment-saturated Miracle Mile area, he based this pie on the predatory nature of Hollywood and its denizens. It’s topped with organic red onion and tomato, plus the customer’s choice of rattlesnake sausage, duck and bacon sausage, or alligator sausage. “The snake and alligator are predators, while the pig and duck are prey,” he explains. “But even taste-wise, they differ; those who want a leaner meat (similar to a chicken breast) can choose the ‘predators,’ while the duck and bacon sausage is more like a bloody steak. Because the sausages are so unique, people think about them as ‘gotta try’; customers are immediately intrigued.”

Operators can easily get bogged down with all of the pizza possibilities out there, but limiting yourself to minimal toppings can actually be liberating—and educational. When you’re forced to keep it simple, you’re able to easily discern what flavor combos are most appealing and which ones are best left as behind-the-scene experiments. Why not try drilling down to the basics for a pie or two on your menu?