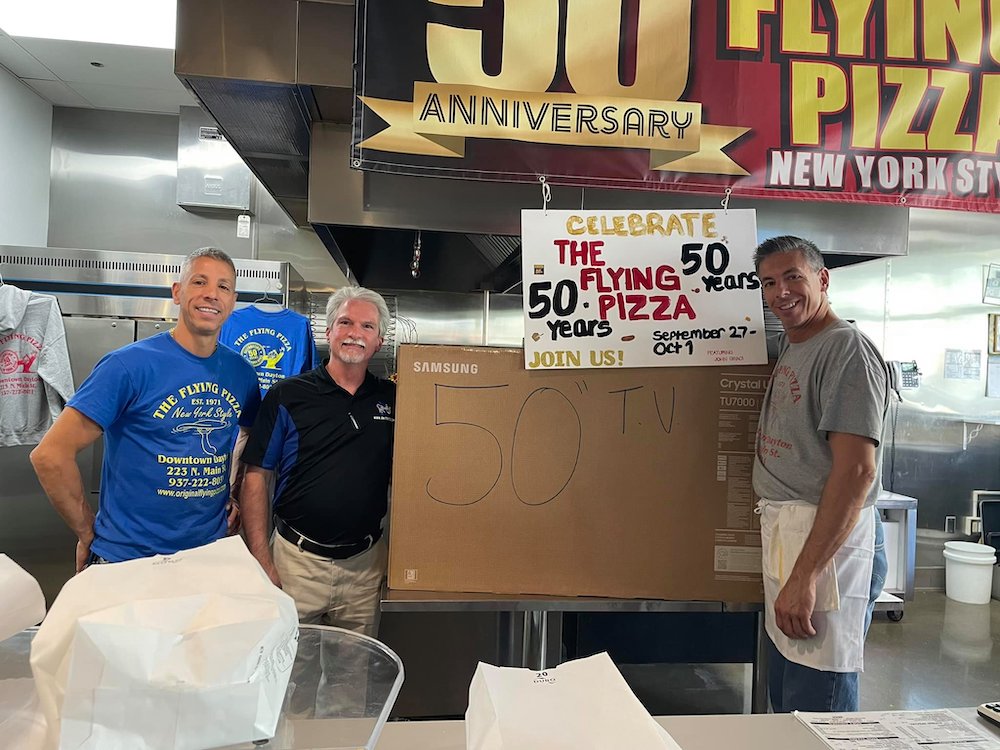 A customer won a free large-screen TV in a promotion at The Flying Pizza in Dayton, Ohio.

Pizzas have been flying and twisting through the air for nearly 50 years at The Flying Pizza, which celebrates its golden anniversary on October 1.

The company, which has locations in Dayton, Centerville and Fairborn, Ohio, has been building up excitement with giveaways this week, including large-screen TVs as well as gift certificates and branded sweatshirts and T-shirts. If the customer gets a pizza box with a golden “50th Anniversary” sticker, they can be entered into a raffle to win the TVs. Two TV sets will be given away each day through Thursday, September 30, and eight will be awarded on Friday, October 1.

John Graci founded Flying Pizza in 1971, and his sons, Tony and Frank, took over the downtown Dayton location about 15 years ago. Tony, the elder of the two brothers, worked with his dad in the pizzeria as a teenager but didn’t learn to appreciate the work until he was about 16, he told the Dayton Daily News. “I started seeing the customers and how they interacted with my dad, how important he was to this place,” Tony said.

One customer told Frank that John Graci unknowingly prevented him from committing suicide years earlier, simply by treating him with the same friendliness and care that he showed to all of his guests.

After its launch, Flying Pizza has survived numerous recessions and downturns, as Frank told the Daily News. “In the 70s, it was just a madhouse down here. Then, things died off due to the economy, just due to everything … With the ups and downs, you just never know what you’re going to get. So my father said, ‘Just stick to the basics. Keep making good pizza and they’ll come.”