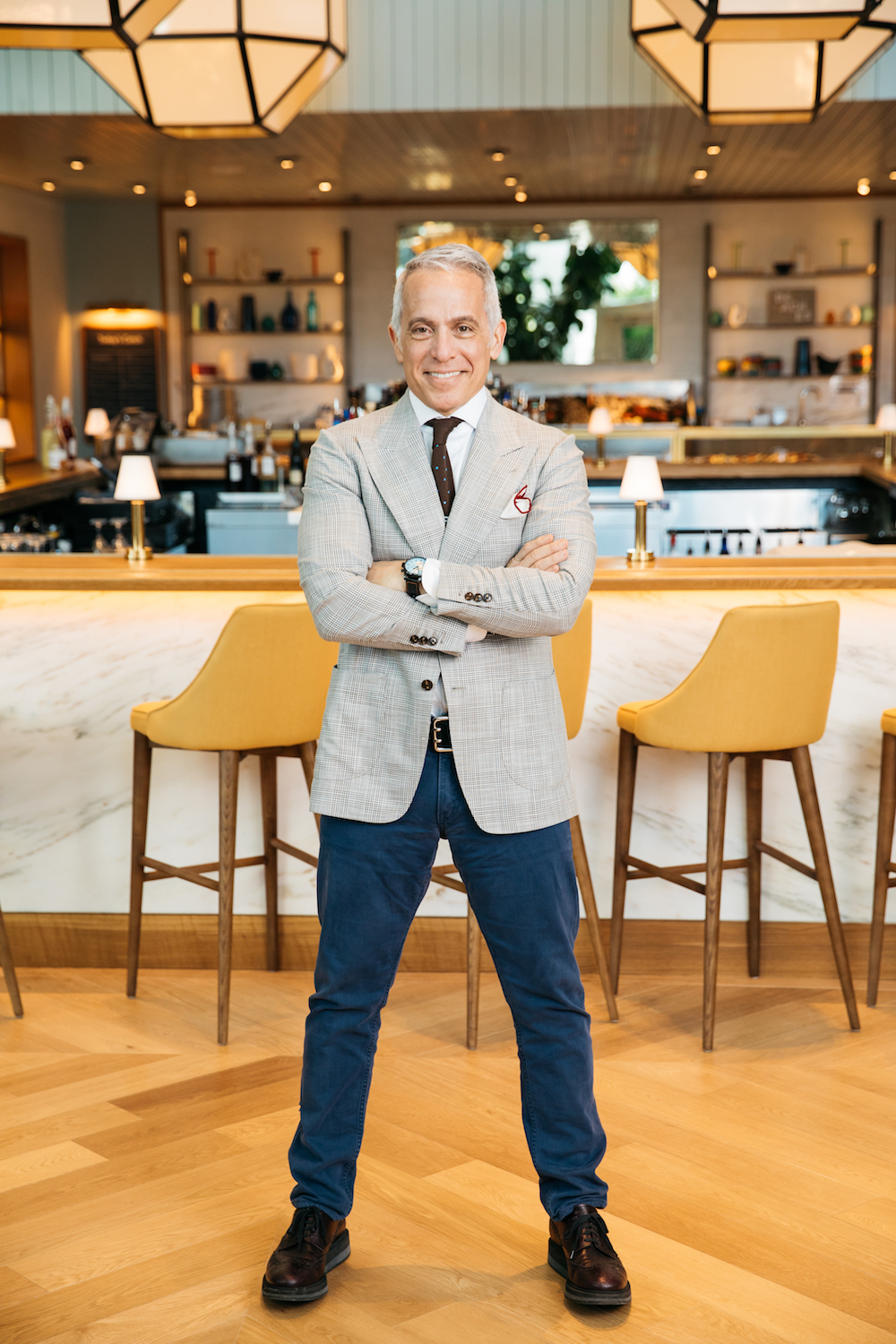 Premium Pies at Point Royal
Celebrity chef Geoffrey Zakarian has helmed award-winning restaurants, penned best-selling cookbooks and graced TV screens as a judge on Food Network’s Chopped and co-host on its daytime series The Kitchen. But, lately, he’s been thinking pizza. As chef/partner at Point Royal, nestled beachside since 2017 at the high-end The Diplomat Beach Resort in Hollywood, Florida, he decided this year to add pies to his menu, which he describes as “a take on Mediterranean-meets-local Florida cuisine, emphasizing local seafood.” “We chose to add pizza to the menu to attract the families in the hotel, to capture that audience,” Zakarian explains. “Plus, I’m a fan of pizza and love to make my own.”

The pizza’s slightly charred appearance and light, digestible dough denote an artisanal, handmade, wood-fired feel—surely a must when charging $24 for a cheese pie and up to $32 for the Pie of the Day. But behind the scenes, Zakarian maintains a balance of careful recipe development and high-powered equipment to streamline operations, including fast-working vertical cutter mixers. “It’s important to understand your environment and how the dough reacts,” Zakarian says. “South Florida is very humid, so to design and test a dough that replicates one from the North takes time, and I think we nailed it. To maximize efficiency, we use Turbo Chef pizza ovens that can complete a pizza in under 200 seconds while giving a wood-fired taste and look—truly remarkable pieces of equipment!”

To create the premium-priced Pie of the Day, chefs at Point Royal survey what’s available in-season from vendors while considering combinations that will set the restaurant apart from the pizzeria down the street—and selecting ingredients that can also be utilized across the menu “to keep the pie in line with what we’re promoting,” Zakarian says. “Our signature cheese pizza, with fresh basil, fresh Jersey tomatoes and first-press olive oil, has been very successful, but other great sellers have included ’nduja, arugula and ricotta; prime rib with freshly shaven horseradish atop; truffle with white sauce; and the classic prosciutto-arugula, with planks of Parmigiano-Reggiano and olive oil.”

Nailing Third-Party Delivery at Crust
In April 2018, Crust landed the cover of PMQ Pizza Magazine, so checking in a year later with the power couple, Klime and Anita Kovaceski, behind the hot Miami concept was a no-brainer. One significant area of growth for the pizzeria-restaurant hybrid has been third-party deliveries—and, as usual, Klime has nailed the details to ensure the system works for him, not against him.

Yes, he’s faced the usual challenges, like rude drivers and 30% fees, from third-party outlets, but they’ve also grown his business to a 20-percent-delivery operation. Some of his secrets to success: He shuffles pickups from these drivers to the side door, leaving the front door unblocked for in-house diners and allowing for traffic to flow uninterrupted inside the restaurant. On all of the platforms he uses (UberEats, DoorDash and Postmates), he blocks the option to make any modifications or special requests on any order and deletes the “build your own” pie.

Klime admits this move may cost him some customers, but his already diverse menu has been adjusted slightly to allow for customization on certain dishes. For example, diners can select a pasta with chicken, shrimp or both, or choose from olive oil, marinara, cream or pink sauces, allowing for more diner flexibility both in-house and online. (He doesn’t take special requests in the restaurant, either, except for dietary needs).

Meanwhile, to combat the hefty fees that accompany third-party delivery, his response was simple: Raise prices for his online menu by 30% over dine-in—and alert online customers about it up front. Thankfully, his extra-large portions and reasonable prices make at-home diners feel like they’re still getting a good deal. “If they have to take an Uber here and buy a bottle of wine, it’s still cheaper for them to eat at home,” Klime notes. “When you deliver quality, quantity and consistency, it’s fine to charge more, unless you’re already overpriced.”

To combat less-than-ideal experiences beyond his control, Klime points diners to the source, the third-party outlet—but he also overcompensates for anything that isn’t perfect, perhaps sending along a $25 gift card to a disgruntled delivery customer. Each third-party provider takes up its own tablet at a docking station in Crust, sending orders straight to the POS and kitchen. And if business heats up on a busy night, Klime is ready to pull the plug on online orders for an hour or two or lengthen estimated delivery times. “We are, first and foremost, a restaurant, and the dining room has priority,” he says. “But now, as a $2 million operation, we do $600,000 to $700,000 in takeout and delivery—and that number is still growing.” 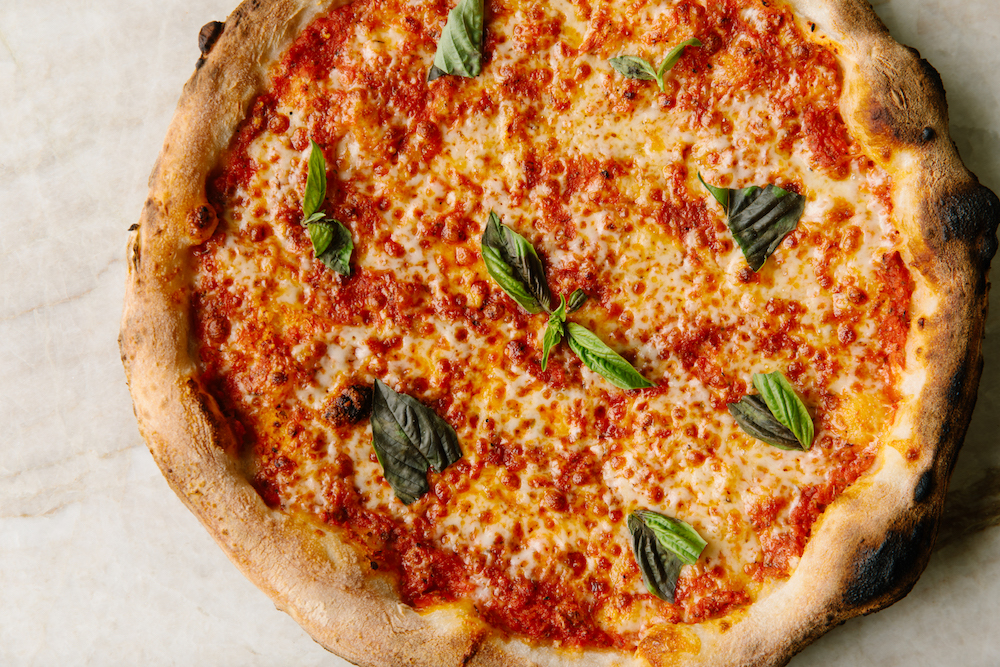 Instructions:
Preheat the oven to 525°F and place a pizza stone on the top rack of the oven to heat up. On a lightly floured surface, place the ball of pizza dough down and begin to form the crust by pressing from the center, pushing lightly out to form a lip for the crust. Knock down the dough by pressing firmly with knuckles around the dough. To stretch the dough, pick up the dough (which should be a flat 6” by now), and let it drape over the tops of your hands (the hands should be in the center). Slowly move your hands apart, lightly pulling the dough with them, but be careful not to let the dough break over your knuckles. Spin your hands one-quarter around and repeat the process until the dough reaches about 12” in diameter.

Place the stretched pizza on a pizza wheel or flat pan, dusted with semolina flour. Start building your pizza with the sauce first, moving the sauce around the pizza in a circular motion, starting from the center and moving out, leaving about ½” for the crust.

Next, working roughly 8” to 10” above the pizza, scatter the shredded mozzarella so that it falls in a broad area all around the pizza. (Remember that the cheese will melt to about double in area coverage, so you should see a lot of sauce under the cheese.)

Lightly finish with the grated Parmigiano-Reggiano and slide the pizza onto the pizza stone in the oven. Bake for 8 minutes. At the 8-minute mark, spin the pizza carefully so that the crust browns evenly and cook for another 8 minutes, or until the desired level of crispness is achieved. Remove from the oven, cut into 8 slices, and garnish with extra-virgin olive oil and fresh basil leaves. Serve hot.