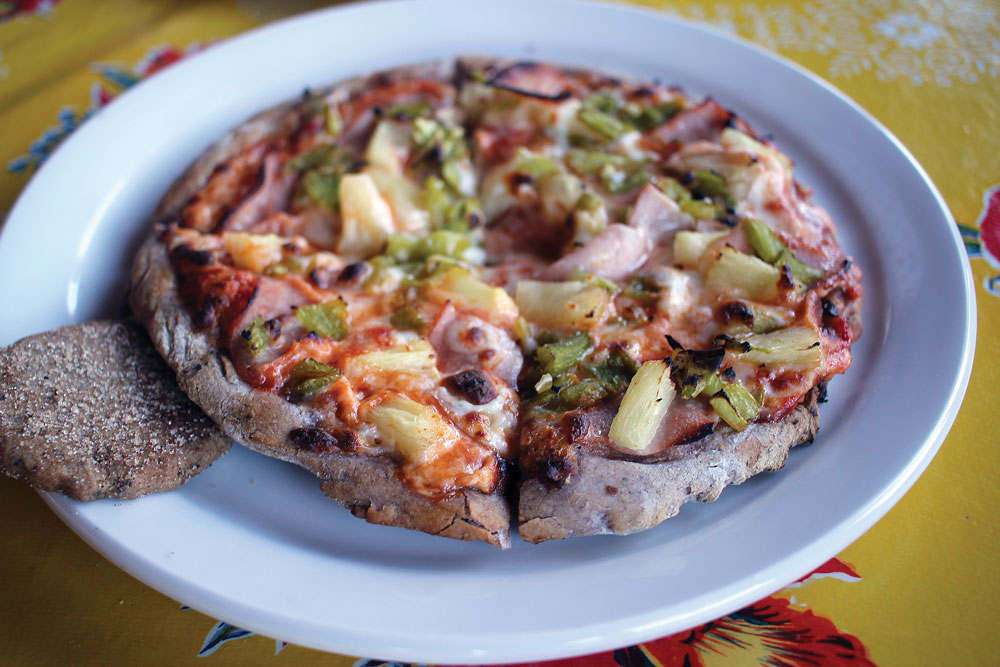 From the high plains and stunning red-rock deserts to the Grand Canyon, the American Southwest has more than its share of natural wonders. One of them is named Pratt Morales.

The energetic, ever-smiling owner of Golden Crown Bakery and Panaderia in Albuquerque, New Mexico, Morales is an octogenarian with the energy of a college kid. He’s also the mastermind behind a menu of Southwestern-style pizzas that you’ll be hard-pressed to find anywhere else in the country.

Morales founded Golden Crown as a neighborhood bakery in 1972 and now runs it with his son, Chris. Unlike some men his age, he has no fear of change. He has adapted with the changing times and trends, adding local craft brews, fruit smoothies and gourmet coffees to his menu, along with homemade specialty breads, sandwiches, pastries and cookies.

“About 12 years ago, we wanted to incorporate pizza into our menu,” Morales says. “However, we weren’t aware of how to make New York-style pizza, which is so popular, or Chicago, Boston or California styles. So I told my son, ‘Let’s not go with that, because we don’t know what the heck we’re doing. So why don’t we create a New Mexican pizza?’ That began our research into developing a crust that had local ingredients.”

Desert Magic in the Mouth

It’s true that “Southwestern,” strictly speaking, isn’t an official pizza style, but with innovative pizzaioli like Morales leading the way, it could be. More and more pizza makers around the country have invented signature pies based on Southwestern and Mexico-influenced ingredients, from cilantro and cumin to chipotle, jalapeño, salsa and Hatch chiles.

Morales has taken it a couple steps further. Like a desert-dwelling shaman, he draws from the region’s natural resources to conjure up balanced flavor combos that taste like magic in the mouth. And Morales doesn’t only use locally sourced ingredients as toppings; he incorporates them into his pizza crusts. Golden Crown offers three crust selections: blue corn, green chile and a multigrain peasant dough. “Our ingredients are mostly New Mexican,” Morales says. “Our blue corn is milled locally and organic. We have it roasted to our specs. The texture is nice and crusty.”

But while most pizza makers keep their dough recipes simple, Morales piles on the flavors. His blue corn crust has 18 ingredients, he says, and the green chile crust is packed with 24 ingredients. For the latter, he rattles off a list that includes tomatoes, onions, garlic, cilantro and Parmesan cheese.

“We’re professional bakers, so we came up with our recipes,” he says. “The key was to bring all this flavor, all this color, all this texture, but not make it heavy. No oils, no fats, no sugar, very little salt—and when you put all these fresh vegetables on top, it’s unique. When people talk about a pizza being not the best thing to eat, they haven’t tried ours.”

Choosing the right toppings for a green-chile or blue-corn pizza crust is “like wine tasting,” Morales notes. “When you get the blue-corn crust, you want to top it with vegetables. If you want pepperoni or Italian sausage, go for the peasant dough, the closest thing we have to a traditional crust. We pair the toppings to the crusts.”

From Prickly Pears to Hatch Chiles

Jeff Flancer, owner of Flancer’s Café and Pizzeria, has also learned a thing or two from Mother Nature. With two stores in Gilbert and Mesa, Arizona, he has borrowed from Native American culinary traditions to develop several menu items based on the fruit of the prickly pear, which grows on the prickly pear cactus. Although the cactus looks frightfully inedible, the flavor of the fruit is often described as a cross between watermelon and bubble gum. Flancer has a different take: “I think it has more of a botanical taste of honey with watermelon undertones,” he says.

Flancer’s Perfect Prickly Pear Chicken sandwich features chicken breast marinated in prickly pear syrup along with his New Mexican Green Chile Aioli, provolone, lettuce and tomato. Flancer describes the syrup as “sweet, like a jam…or, more closely, a glaze. The fruit is boiled down and thickened to give it a consistency that is a little heavier and almost saucelike. We marinate the chicken breast overnight to get the flavors to meld together. We wanted to use this local ingredient in our sandwiches or on the chicken breast and wanted it to be used in a number of ways on our menu. We didn’t know at the time that this sandwich—and the prickly pear chicken in general—would be so well-received, but it’s our second best-selling sandwich of them all.”

Meanwhile, Hatch chiles, grown in the Hatch Valley in New Mexico, pack a more potent punch. “When you bring up Southwestern pizza, Hatch chiles are the first thing that come to mind,” says Lee Hunzinger, pizzaiolo at Zoli’s NY Pizza in Addison, Texas. “I look forward to Hatch chile season every year. I love that we can order them from mild to hot and, of course, for their flavor. Some peppers can be overwhelming and take over a pizza’s flavor. What I love about Hatch chiles is their mild, sweet taste when they are roasted. The flavor is much more subtle than bell peppers, allowing other flavors to also shine on a pizza.”

Even Paul Stanley and Gene Simmons of KISS, co-founders of the Rock & Brews chain, know you can’t run a restaurant in the Southwest without digging around in the local dirt for ingredients. Rock & Brews’ Albuquerque location features the Rio Grande Green Chile Pie, with a tomatillo salsa base, green Hatch chiles and a hard, crumbly Mexican cheese called cotija, plus grilled chicken, roasted red peppers, red onions, and mozzarella and pepper Jack cheeses.

“It’s not too spicy, but it has a little bit of heat to it,” says manager Kevin LeTourneau. “The Hatch chiles are hard to find year-round outside of New Mexico, so other [Rock & Brews] stores might use a poblano pepper or another seasonal pepper instead. Every one of our restaurants has core items, but we also have items to appeal to people of the local area and the cuisine they’re accustomed to.”

Delicious is delicious wherever you live, and pizzaioli around the country, from down-home independents to trendy chains like Pieology, continue looking to the Southwest for inspiration. Even as regional culinary fads come and go, it seems that Americans’ love of big, bold, zesty flavors, like the legends of Geronimo and Billy the Kid, will never fade. 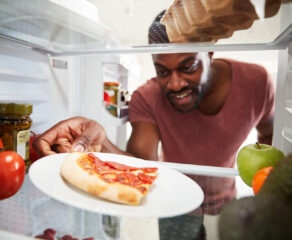