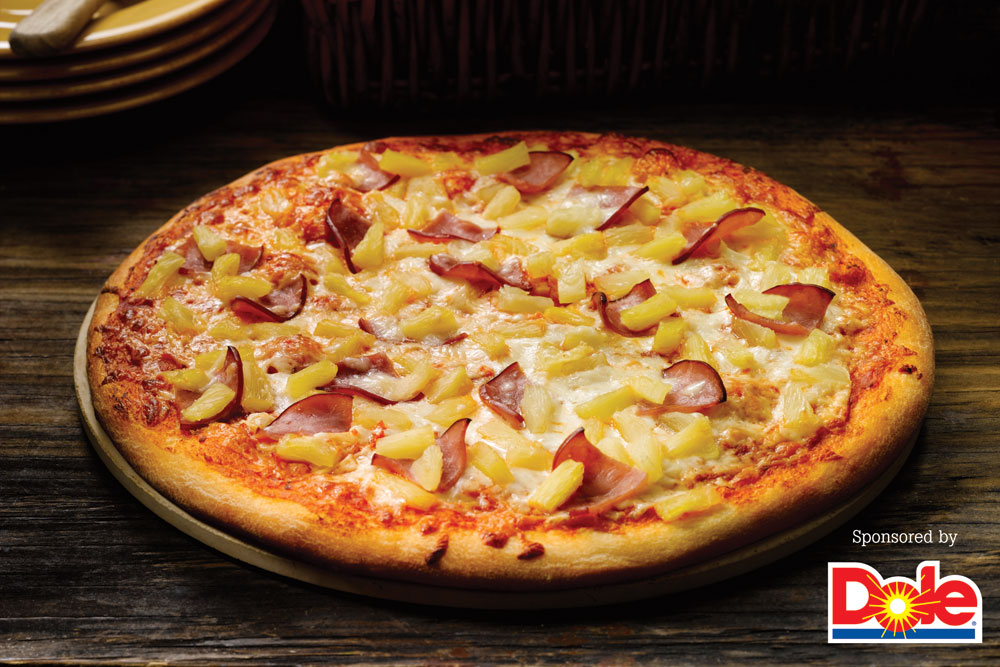 Brush the pizza crust with oil. Spoon the sauce over the crust. Sprinkle the cheese and pineapple tidbits and top with Canadian bacon. Bake at 450°F for 12 to 15 minutes or until the crust is golden-brown.

A Slice of Paradise

From the United States to the South Pacific, pizza aficionados love Hawaiian pizza and its tantalizing combination of sweet and salty flavors. Even better, anyone can craft a great Hawaiian pie using only cheese, tomato sauce, ham and pineapple. But creative types such as Matt McClellan from Tour de Pizza (tourdepizza.com) in St. Petersburg, Florida, take it further, adding mandarin oranges to the mix, while the Buffalo, New York-based chain Just Pizza (justpizzausa.com) adds maraschino cherries and sliced almonds. Paco’s (pacoschicago.com), a Chicago eatery specializing in Mexican-American pizzas, turns up the tropical heat with a generous helping of jalapeño peppers. If you want to create a unique pie that packs a true Hawaiian punch, here are some additional ideas from innovators across the country:

For a tangy twist on the Hawaiian classic, check out Elgin, Illinois-based Geno Nottolini’s Pizza (elginpizza.com). Along with Canadian bacon and pineapple, this pizzeria tops off its interpretation with shrimp and barbecue sauce.

Spam is hugely popular in Hawaii, so the Greathouse of Pizza  (greathouseofpizza.com) in Casey, Illinois, has created a “true Hawaiian pizza” topped with the famous canned ham, pineapple rings and green onions. Slated to run as a special later this year, it’s drizzled with teriyaki sauce and topped with mozzarella cheese and coconut flakes.

No one makes a Hawaiian pizza like a Hawaiian. Serino’s Pizza Waikiki (serinospizzawaikiki.com) in Honolulu starts with an Italian cheese blend and adds pulled kalua pork, red onions, tomatoes and bacon, topped off with a pineapple-mango-papaya chutney.