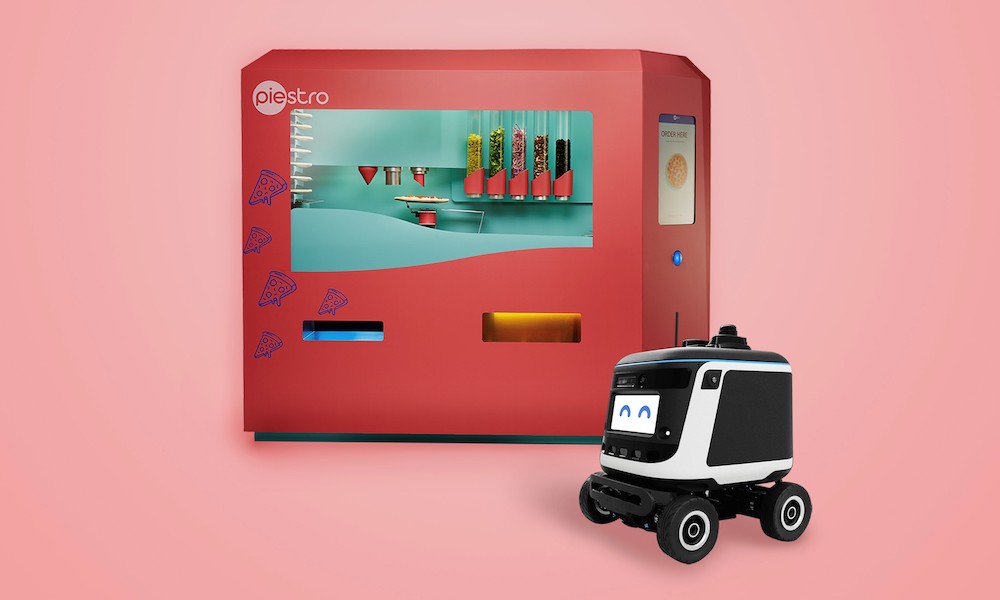 As the demand for a contactless pizza experience soars in the COVID-19 era, two startups specializing in foodservice automation have partnered to make and deliver pizzas without the once-vaunted human touch.

Piestro, which has developed a fully automated pizza shop with zero-contact food preparation and cooking, last week announced a partnership with Kiwibot, a robotics company that specializes in contactless delivery of food and goods.

“We see automation as the clear path forward, a way to ensure quality and meet the concerns of the public over health and safety with contactless experiences,” Massimo De Marco, Piestro’s CEO, tells PMQ. “Cooking is a big part of that, but so is the food’s journey. Our partnership with Kiwibot really sets us apart early. We 100 percent believe that, in the coming months, demand for automation will only continue to increase, and we are already paving the way for a fully contactless experience from the time you order to the moment it reaches your door.”

The partnership with Kiwibot comes after Piestro’s successful campaign on crowdfunding platform StartEngine. The company said it ended up with “an oversubscription of investor interest” and plans to launch a second funding campaign on StartEngine to give more everyday investors a chance to buy in.

De Marco comes from a seventh-generation family of Italian chefs, including his mother. “Pizza is my first love, and I have more than 30 years of hospitality and robotics experience,” he says. “I’m a true lifer!”

Starting in 1986, De Marco opened several restaurants in New York before moving to California in 1992. “I spent the next decade owning and running my own restaurants, doing event catering, hotel operations and bar design across the globe, including Switzerland, Mexico, Miami and Los Angeles,” he says. “I worked with Wolfgang Puck before branching out and looking at how technology and food could help address several industry challenges I had experienced through my career.”

De Marco also serves on the board of Miso Robotics, the company that created the burger-flipping foodbot known as Flippy. Nation’s Restaurant News ranked De Marco at No. 7 in its 2020 Power List of restaurant leaders changing the industry with technology and innovation.

Piestro, a pizza-making machine that can bake a pizza in three minutes with just a push of a big, blue button, offers pizza restaurateurs a chance to expand their takeout reach. The machine can be placed in high-traffic locations such as college dormitories and apartment complex lobbies. “A Piestro unit is roughly the size of two vending machines and is fully autonomous, requiring no employees to operate, as opposed to the average pizza restaurant’s 10+ employees,” the StartEngine fundraising campaign stated.

Piestro’s transparent window allows customers to watch as the pizza is assembled, complete with moving robotic arms, colorful dispensers that squirt sauce onto the crust and pop out ingredients—up to six toppings—and spinning disks that move the pizza from one stage of the pizza-making process to the next. Once the pizza is made, the machine boxes it and ejects the box through a slot near the bottom.

The dough is made with Caputo flour, pressed into 12-inch disks, frozen and stored in shelves within the unit, De Marco says.

“The anticipated cost to ‘open’ a new Piestro location will be $60,000, which is a steep drop in comparison to the $700,000 to $1 million it costs to open a small traditional pizzeria location,” De Marco notes. “While the profit margins of a traditional pizzeria are only 22 percent in terms of food costs, labor, real estate and other expenses, the profit margin of Piestro is around 48 percent.”

Piestro’s partnership with Kiwibot adds a new moneymaking dimension to the business model. The Colombian-owned Kiwibot launched in 2017, and its 200-plus bots have made more than 100,000 deliveries around the world, according to the company’s website. Kiwibot’s diminutive robots are now a familiar sight on college campuses such as the University of California-Berkeley and the University of Denver.

Earlier this year, Kiwibots also started making deliveries to customers in downtown San Jose and Buena Vista, California, for a delivery charge of $3.99. Each Kiwibot boasts a camera and sensors that detect surrounding objects and aid in navigation around obstacles. They’re often controlled remotely by humans, but the company hopes to make them fully autonomous over time.

According to De Marco, Piestro’s units will be integrated with a loading mechanism designed for Kiwibots, allowing the bot to collect the pizzas and deliver them. “Together, Kiwibot and Piestro further limit the potential for customer exposure to harmful pathogens,” he says. “Through an in-app order and purchase, customers can select their preferred pizza design. The order is registered with Kiwibot, and a bot is deployed to a Piestro location, where the pizza has been made through automation and timed to dispense as closely as possible to the Kiwibot’s arrival for maximum freshness and quality. Kiwibot picks up the pizza and delivers it directly to the consumers, creating an added layer of health and safety from the time your pizza is made to the moment [it’s] in hand.”

Customers pay a separate fee for Kiwibot delivery, which is then charged back to the operator. “This fee can vary but is significantly lower than the up-to-30-percent that traditional delivery services take from operators,” De Marco notes.

Piestro hasn’t launched its first unit yet, but “our up-and-coming model is advancing quickly,” De Marco says. “The partnership with Kiwibot will allow us to come to market with the best possible offering in the months to come. The exact timing may depend on other partnerships coming together and current talks with potential customers—lots of excitement there!”

“We’ll be tackling the U.S. market first, but I know the world is full of pizza lovers like me,” De Marco adds. “Stay tuned—2021 will be a big year for us.”