Happy vendings: Will pizza vending machines change the way we sell pizza, or are they just another marketing tool? - PMQ Pizza Magazine 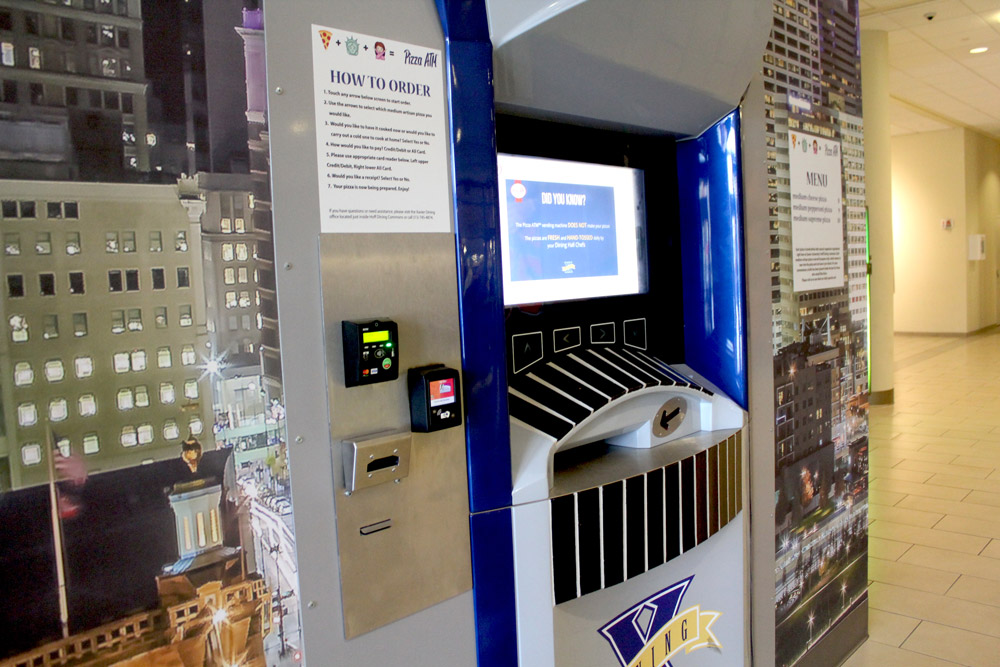 By the time the first U.S.-based pizza vending machine arrived at Xavier University in Cincinnati in 2016, similar units had been available for well over a decade in Europe. But now, these vending machines are finally hitting the States—and potentially shaking up the industry. The appeal among consumers is undeniable; in today’s 24-7 world, people want pizza, fresh and fast, on demand, anytime. And, for pizzeria owners, the machine can open up an additional revenue stream when placed in high-traffic areas, such as airports, college campuses and shopping malls—with less risk than opening up a second location.

To get a feel for the trend and where it might be headed, PMQ checks in with three key players who just might help shape the pizza vending landscape: a machine manufacturer, a pizzeria owner and the university that ignited the craze. For them, this ain’t just a fad—it’s the future.

“We thought the Pizza ATM [above] was a no-brainer on a college campus and that millennials and Generation Z students would embrace it….We’re on track to recoup our investment in 18 months, which we anticipated—and after that, it’ll simply be a revenue generator.”
—Bill Moran, Xavier University

Rise of the Machines

Shawn Marquardt, vice president of business development for 24/7 Pizza Box, based in Sarasota, Florida, admits he was initially attracted to the manufacturing side of pizza vending by sheer novelty. But through years of development, he’s witnessed an industry that’s clamoring for the concept; one of the company’s investors is a local pizzeria owner, and there’s been interest from coast to coast and even abroad. “We thought of the by-the-slice concept, with prebaked pizzas that are reheated and served, and we wanted to accomplish that at a high-quality level,” Marquardt explains. “Pizzerias can purchase the machine and expand their business, using just the capacity at the pizzeria, while getting their product and brand in front of new customers and boosting revenue.”

After several redesigns, the first units are scheduled to be installed in October. Delivering fresh product has been a major challenge, but the process sounds simple enough: Place the vending machine within 30 minutes, maximum, of the pizzeria. At the pizzeria, the pizzas are baked, cooled, cut into slices, loaded into a transit mechanism, and refrigerated until ready to transport. After the slices are loaded into the machine, a timer starts so that product is monitored for freshness. The machine sends notifications when a predetermined inventory level is reached, so the operator knows what and how much to refill. “The machine communicates inventory, sales, or if there’s a power outage,” Marquardt says. “It’s plug and play.”

In a unit about 1½ times the size of a standard vending machine, product is air-sealed to prevent drying, and when the customer orders, the slice is ejected from the machine’s refrigerator, then heated on a conveyor oven that’s customizable to accommodate virtually any crust type (though deep-dish styles are not recommended). “Some locations, like factories and office complexes, don’t charge rent for the machine, since they see it as a bonus for the facility,” Marquardt explains. “In a mall or airport, however, there are fees for renting the space, which are automatically deducted from sales.”

Pizzeria owners may like the no-labor-needed setup, as well as minimal risk, versus opening a second brick-and-mortar location. In addition, owners can maximize efficiency of existing staff—i.e., having employees craft vending-machine pizzas during slower times. “You can even move the machine if you’re not getting the results you want,” Marquardt adds. “Our figures indicate that the return on investment, serving 40 slices per day, would be within 12 months; if you sell out every day, it’s within three or four months.”

“I’m really intrigued by the possibilities and the business model, especially as labor costs are on the rise. You can put [pizza vending machines] in bars, airports, hospitals or office buildings, wherever there’s a dense population and a demand.”
—Joe Irick, Grinders Chicago Pizzeria 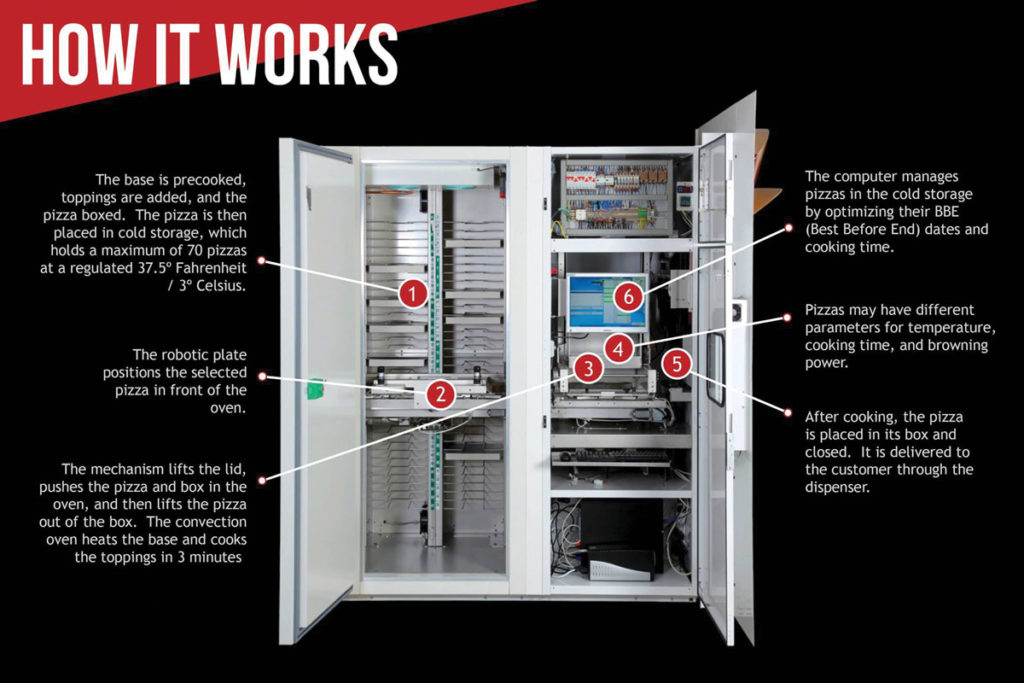 Joe Irick, owner of Grinders Chicago Pizzeria in San Francisco, is looking forward to testing out a demo unit of the 24/7 Pizza Box in his area. He offers three crusts—pan, deep-dish and thin—but for the machine he will focus on thin-crust for speedy baking. “I’m really intrigued by the possibilities and the business model, especially as labor costs are on the rise,” Irick explains. “You can put them in bars, airports, hospitals or office buildings, wherever there’s a dense population and a demand. Every college campus I’ve approached has turned me away because of their existing foodservice contracts, but we’re just looking to see how it works and how it’s perceived by the public. Then we can try them in different spots.”

Irick views the machine as an alternative to opening a second location, expanding his business without adding overhead (after the cost of the machine) and using his existing staff. He also likes the idea of adding a presence in locations where a physical restaurant would be impossible or prohibitively expensive, such as in an office building break room or airport. Irick believes San Francisco, with its tech-savvy citizens, will be an ideal launching ground for pizza vending. He can also offer marketing opportunities through the machine’s ordering screen; for example, if the machine is in a bar, he can sell advertising to beer or alcohol companies, market his own pizzeria, or both.

Of course, one challenge is ensuring product quality, and Irick extensively tested recipes to fine-tune his pizza for this new application. “I wouldn’t want product sitting there for more than two days, but I’ve worked it out so it tastes great,” he says. “Just like with any new oven, you have to tweak things. When we get the demo unit, we might have to make minor tweaks again, but we think it’ll work out really well.”

When Xavier University added the country’s first vending machine of its kind on campus in August 2016, the small Cincinnati-based college found itself at the center of a media firestorm. Local outlets jumped on the story, followed by national news reporters and culminating in spots on Good Morning America and Today.

Rather than heating up slices, the Pizza ATM, manufactured by the French company Paline, fully bakes whole pizzas upon order. The machine is stocked with take-and-bake pies made in the dining hall. The pizzas are cooked in a high-heat convection oven in about 2½ minutes and served in a box to hungry students. “We were looking to expand our late-night services and have a round-the-clock option, and we thought this would be a natural extension of our strong pizza program in the dining hall, without requiring additional labor,” explains Bill Moran, director of auxiliary services for the university. “We thought it was a no-brainer on a college campus and that millennials and Generation Z students would embrace it.”

The immediate response was “through the roof,” Moran reports, and has since settled in as a normal part of life on campus, but it’s most popular at the start of semesters as students flock to the novel pizza producer. And because so many local eateries shorten hours for the summer, the machine is a surprise hit even in the slow season. (After Xavier’s success, a second Pizza ATM is scheduled for a campus in northern Ohio.)

The machine is managed with Web-based software on a PC or mobile device, allowing for notifications when a minimum level of inventory is reached. Pizza is sold on a first-in, first-out basis; a color-coded reporting system updates staff on product freshness, coding each product green, yellow or red. At 48 hours, the pizza enters the red zone, and the slot is locked so it won’t dispense, but the pizza can then be pulled out to serve in the main dining hall, virtually eliminating waste.

“The machine was fairly expensive, but we’re on track to recoup our investment in 18 months, which we
anticipated—and after that, it’ll simply be a revenue generator,” Moran says. “We weren’t concerned about the machines working, since they’ve had them in Europe for 10-plus years. We just wanted to price the pizza right to encourage buys.”

Even better, students love the on-demand aspect; rather than waiting 45 minutes for delivery, they have fresh pizza in minutes, round the clock. When school is in session, 30 to 35 pizzas sell per day, or 200 to 250 weekly, and about 8 to 10 daily in the summer—strong numbers for a relatively small campus  (about 7,000 students). And, Moran maintains, they dispense a high-quality product that’s student-approved. “That’s the beauty of these machines,” he says. “You still handmake the pizzas yourself and just load them in.”