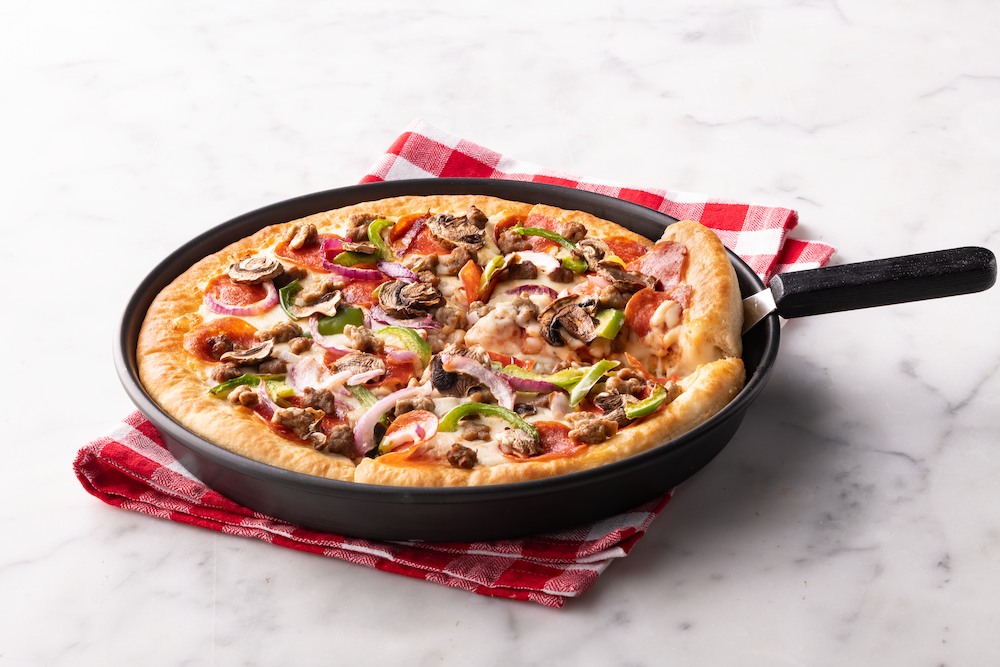 Frank and Dan Carney aren’t exactly household names, but the business they founded in 1958—a modest 500-square-foot eatery called Pizza Hut—certainly is. From humble Midwestern roots in Wichita, Kansas, Pizza Hut has grown into a worldwide powerhouse with 18,000-plus locations in more than 100 countries. And when many people think of Pizza Hut, they think of the classic Original Pan Pizza.

The chain celebrated the 40th anniversary of its signature pie last month with hype and fanfare aplenty. While most of us binge-ate our way through National Pizza Month in October, Pizza Hut, in a nod to its international reach, renamed it Global Pizza Month and created specials for fans in 55 markets around the planet.

“No one loves pizza more than us,” said Vipul Chawla, president of Pizza Hut International, in a statement. “And to this day, there is nothing more satisfying or more unifying than that first tasty bite. It is simply in our DNA to deliver accessible happiness.”

After three years of research and testing, the company also delivered a new recipe for its Original Pan Pizza in May 2019. The updated version is baked in a “newly engineered pan, which perfects the golden-brown, crispy, buttery crust, and is topped with a new blend of cheese and sauce to enhance the flavor and complement the chewy center,” the chain announced at the time.

Penny Shaheen, Pizza Hut’s senior director of culinary innovation and strategy, told Today.com that the new recipe added more sauce and replaced whole-milk mozzarella with a part-skim mozz that’s piled on a little heavier in the middle of the pie for a more gooey, cheesy effect.

Not everyone was thrilled with the revamp. A man identified as Stuart Green started a petition on Change.org demanding that Pizza Hut bring back its original Original Pan Pizza, but it failed to reach the target goal of 500 signatures. Pizza Hut, meanwhile, has benefited from the pandemic-fueled boom in pizza chain sales. Parent company Yum! Brands reported that Pizza Hut’s domestic same-store sales increased by 5% in the second quarter of 2020. The company saw a 21% jump in off-premise business, thanks in large part to family-focused value deals like the Big Dinner Box and the Big Dipper.

“We’re proud to be known for a lot of firsts,” Chawla said. “From the first pan pizza to the first online order and the first pizza in space, our history of daredevil innovation has led us to achieving the ultimate in satisfaction. However, it doesn’t stop at the first. We’re already looking ahead to the next 40 years of the [Original] Pan Pizza, and in everything we do we strive to always be surprisingly but unmistakably Pizza Hut.”