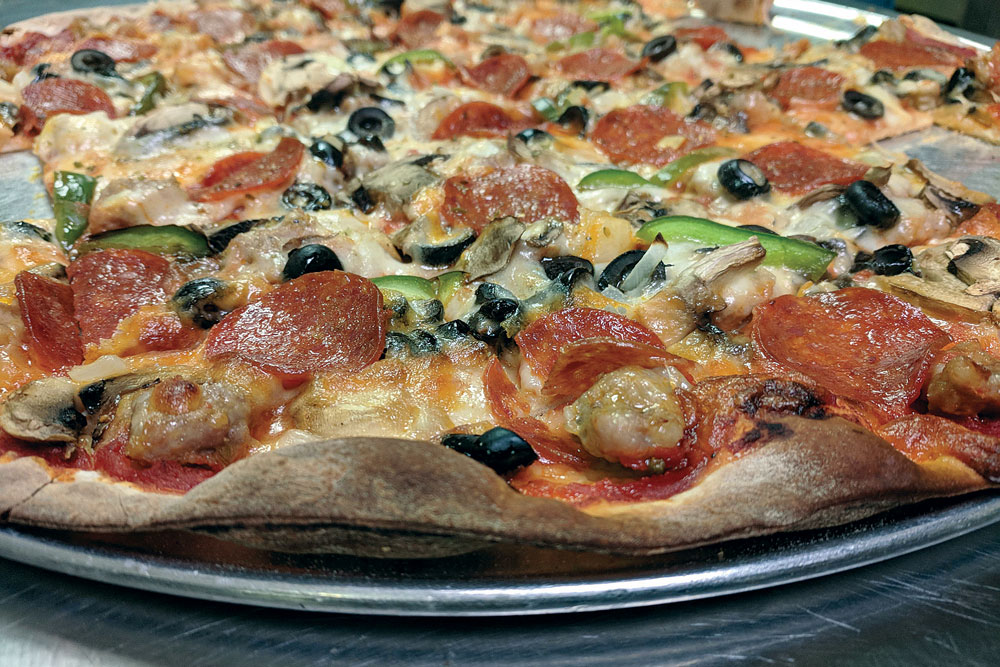 We all know pizza and beer go together like Laverne and Shirley. So it should come as no surprise that Milwaukee-style pizza—unique to the beer capital of the world—is designed specifically to be eaten with an ice-cold brew. Preferably in a tavern with lots of friends.

And even if you don’t know a soul when you arrive, you will make friends in Milwaukee. Just as it was portrayed in classic TV shows like Happy Days and Laverne & Shirley, it’s a hard-working, big-hearted Midwest city where strangers don’t stay strangers for long, notes Wade Nemetz, co-owner of Milwaukee Food Tours. “If you walk into a local tavern, you’re going to be a local by the time you walk out,” he says. “Everybody’s going to know you. People here love meeting new people and making friends. Milwaukee is just a really big small city.”

It’s also a city that loves a good pizza pie. Since the 1940s, Milwaukee—with its lively mix of Sicilian, Italian, German and Irish immigrants—has evolved its own pizza-and-beer culture. “Milwaukee is a city that surprises,” Nemetz says. “It’s a city of value. You can come here and have a great experience that’s inexpensive. And we have great cuisine. People don’t necessarily think of Milwaukee as a food city, but when they come here, they’re really wowed.”

The SMO, the SMOP and the Works

People do think of Milwaukee as a beer-drinking town. Thanks to German immigrants who brought their brewing skills to the New World, the city already had 138 taverns in 1843—one for every 40 residents—and that was before Frederick Miller founded Miller Brewing Company there in 1855. By the mid-1940s, competition was stiff, and tavern owners needed to stand out from the pack. “A great way to get customers in the door was to offer something to eat, and pizza was very good for that task,” Nemetz says. “Inexpensive, quick and easy to produce, it was a great way to draw crowds from the factories for lunch and dinner.”

And since thin-crust pies bake faster, Milwaukee-style pizza boasts a crispy cracker crust with the sauce and toppings spread right to the edge, Nemetz says. “I have heard people that try it for the first time describe it as similar to flatbreads,” he adds. The pies are typically oblong-shaped or rectangular and cut into squares, which are said to be easier to grab and hold with one hand while gripping a brewski with the other.

The classic topping combo features sausage, mushrooms and onions—known locally as the SMO. Throw in some pepperoni, and you’ve got a SMOP. Walk into any pizza joint in the city and ask for a SMO or SMOP, and they’ll know exactly what you’re talking about. If you want your pie loaded with toppings, you can order The Works. But don’t embarrass yourself by using the wrong terminology. “For an old pizza guy like me, sausage, mushrooms, onions, black olives, green peppers and pepperoni is my favorite,” says Wally Kutch, owner of the legendary Caradaro Club, which has thrived in Milwaukee for 75 years. “That’s called the Works. It’s not a Supreme. It’s not a Deluxe. In Milwaukee, you say, ‘Give me The Works,’ and you know what you’ll get every time. If you say, give me everything and the kitchen sink, well, then, you’re gonna get anchovies.”

“You’ve got to roll out the dough thin. And to make it stand up [to a lot of toppings], you need a high-gluten flour and a certain percentage of salt in the mix.”
— Wally Kutch, the Caradaro Club

Kutch should know. The Caradaro Club is widely credited as the birthplace of Milwaukee-style pizza. John Caravella and Joe Todaro founded the restaurant in 1945, combining their last names into a single brand name, and developed their recipe for a thin-crust, rectangular pizza pie. To create demand, they wandered downtown Milwaukee and handed out free slices to passersby. As business took off, the Caradaro Club became a training ground for other aspiring pizzaioli, who went on to found iconic pizza hotspots like Balistreri’s and the Calderone Club.

“With all the beer that was being produced here in the early part of the 20th century, there was a pizza oven in every bar,” Kutch says. “So pizza in Milwaukee became synonymous with taverns.”

“You need to have food when you’re drinking,” adds Chris Ranson, director of tourism and merchandise at Lakefront Brewery. “Pizza is a perfect sharing food. You can share a whole pan of pizza, and the squares are easy to pick up and easy to drink with.”

The square shape has another benefit, according to Tom Siever, an executive with Balistreri’s. “We put a lot of ingredients on our pizza,” he says. “When you’re eating it, you’re getting a lot of flavor. A square slice holds up all that weight.”

Watch the Video: PMQ’s Brian Hernandez shows you how to make a Milwaukee-style pie. pmq.com/milwaukeestylerecipe

Kutch, like many of Milwaukee’s pizzaioli, guards the secrets of his cracker-crust dough closely. He says the preferred final thickness is about 1/16”. “You’ve got to roll out the dough thin,” Kutch says. “And to make it stand up [to a lot of toppings], you need a high-gluten flour and a certain percentage of salt in the mix.”

Siever advises paying close attention to ingredient proportions in your dough mix. “It’s extremely important to have the proper ratio of water, shortening or oil, flour—that’s gonna be your baseline,” he says. “Then you need to mix long enough and fast enough to get gluten production. Once you get that right, you need to let it rise.”

Like Kutch, Siever won’t divulge much more than that. “We have the recipe written down in a safe place, and there’s only three people who know how to make the dough,” he says. He adds, jokingly, “We’re never in the same place at the same time.”

When the dough is ready, Nemetz says, “A couple of the pizzerias will actually par-bake the crust, pull it back out, flip it over, dress it, and then put it back in to finish. I think it helps that the classic Milwaukee pizza never really has that many toppings on it, even if you order it with everything.”

“When you’re doing a thin-crust pizza, you can bake it off much quicker,” Siever says. “For taverns, especially for people that are hungry, you want to feed them quickly. And pizza is everything you want to make of it—ingredients can be from soup to nuts.”

But Milwaukee-style pizza, like pizza in most parts of the world, largely adheres to time-honored traditions. “The major players here haven’t deviated much from what people have come to know and love,” Siever says. “When our old customers move away and then come back to town, the first place they go is Balistreri’s. That’s what they remember, what they loved when they were growing up. We tweak things a little bit—we might add a couple of things—but we stick to the basics of what made us who we are. Never forget where you came from.”