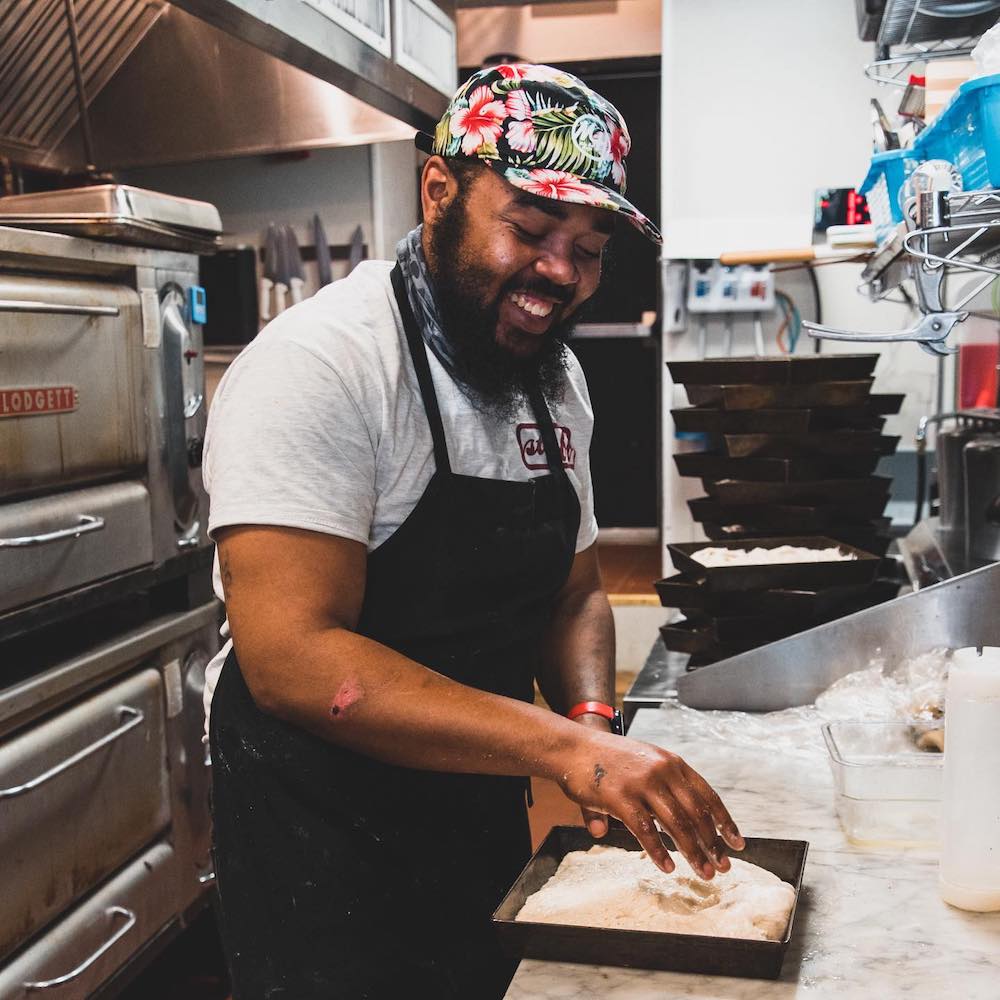 Michael Carter first went to prison—or, rather, a juvenile detention center—at the age of 16 for armed robbery and home invasion. On and off, he spent a total of 12 years of his life behind bars for various offenses. In between jail time, though, he was developing a burning passion for the culinary arts. Only problem was, no one would hire him if they knew about his criminal background.

To get a job, he said in a recent interview with NPR, “I had to lie.”

Not anymore. Today, Carter is the acclaimed executive chef at Down North Pizza in Philadelphia, and when it’s time to hire, applicants with criminal records are perfectly OK with him and the pizzeria’s owner, Muhammad Abdul-Hadi. Creating jobs for the formerly incarcerated is a big part of Down North’s mission, along with serving Detroit-style square pizzas that have become renowned across the nation.

“We have over 60 years of jail time in the kitchen,” Abdul-Hadi told NPR. “We are all living proof that you can build a business around the formerly incarcerated.”

Down North Pizza started out as a pop-up in Philly’s Strawberry Mansion, where it opened in December 2020 and sold 800 pizzas in its first three days. Weekend after weekend, they sold out of pies, with lines of hungry customers waiting outside for a taste, according to Eater.com.

In that respect, Carter has a reason to be thankful for serving years of hard time in prison: That’s where he learned to cook, beginning at the New Jersey Training School for Boys, the aforementioned juvenile detention center. “A big part of my experience being there was feeding myself and others,” he told Bon Appetit in September.

When he wasn’t taking classes at the center, he was working in the kitchen, trying to find ways to improve the “subpar” food served to his peers. “I was cooking all day, presenting meals to everyone … When I came home, I wanted to keep cooking.”

He signed up for culinary school and landed a job with a caterer for PECO, a Philadelphia energy company that already employed his mother. “It was fast-paced short order cooking. Guys working on the electrical lines in the city wanted breakfast fast,” he recalled in the Bon Appetit interview. “I loved it.”

But four months into that job, Carter was arrested for aggravated assault charge and ended up doing seven-and-a-half years. “I only got released because they closed my jail. More money was needed to build two new jails, so mine was shut down. I just counted my blessings, but I understood that politics brought me home.”

Once released, he enrolled at the Art Institute’s culinary school but ended up back in jail after police pulled him and some friends over in their car and found an unregistered gun. He was back behind bars again, even though he says it wasn’t his gun. “Since I’m an ex-offender, I was the guy. For the next 27 months, I sat in jail, without due process.” The officer who had arrested him had been shot in the line of duty in an unrelated case, stretching out the process since multiple judges refused to throw out Carter’s case until the officer returned to duty.

“When I came home,” he told Bon Appetit, “I said I’m done with the street.”

Related: Chef Kurt Evans will give ex-offenders a second chance at new pizzeria

He had been saving his own money to launch a food truck, but he’d had to spend it all—$15,000—on an attorney to plead his case. And during that time, the Art Institute had closed down.

Fortunately, Carter’s exceptional culinary skills led him to the executive chef position at Down North. It’s a decision Carter has given Abdul-Hadi no reason to regret. 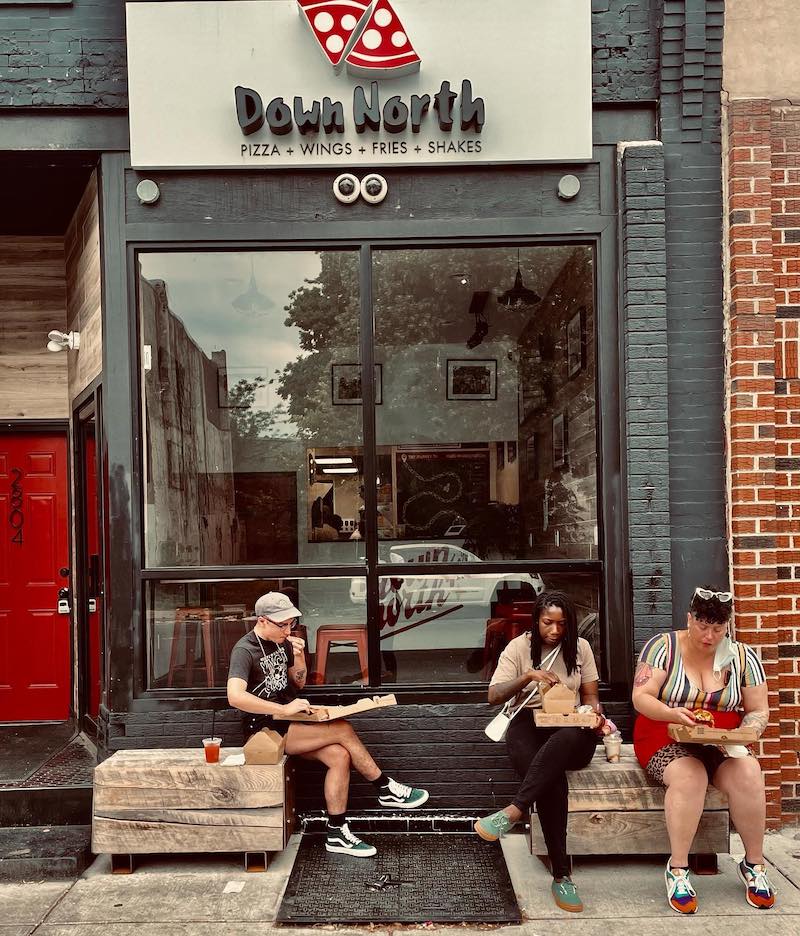 “Down North Pizza is about dope food—Detroit-style square pizza that’s nostalgic and reminds people of Pizza Fridays as a kid,” Carter said in the Bon Appetit story. “But it’s also about training, hiring and housing people like me.

“No one gives you a crash course in returning to society. It’s hard to find a job—because of your track record—and housing, since landlords want to know your previous residence, and it’s not good if that was the state. But Down North Pizza is helping people like me move on and become productive citizens. A lot of guys come in through word of mouth. We help them find housing, and we also have apartments above the restaurant, one of which I’m currently living in. I train everyone so they can do culinary math, make mother sauces, and operate a kitchen—things that are assumed in restaurant kitchens are actually explained here.”

Down North is a perfect example of a social enterprise; it’s a for-profit business that also has a social mission—to hire and train the formerly incarcerated for a career in the culinary arts and to keep them from going back to prison. Pay starts at $15 an hour. In addition to housing support for the staff, the company provides an attorney to help them if any issues come up that could land them in jail again. 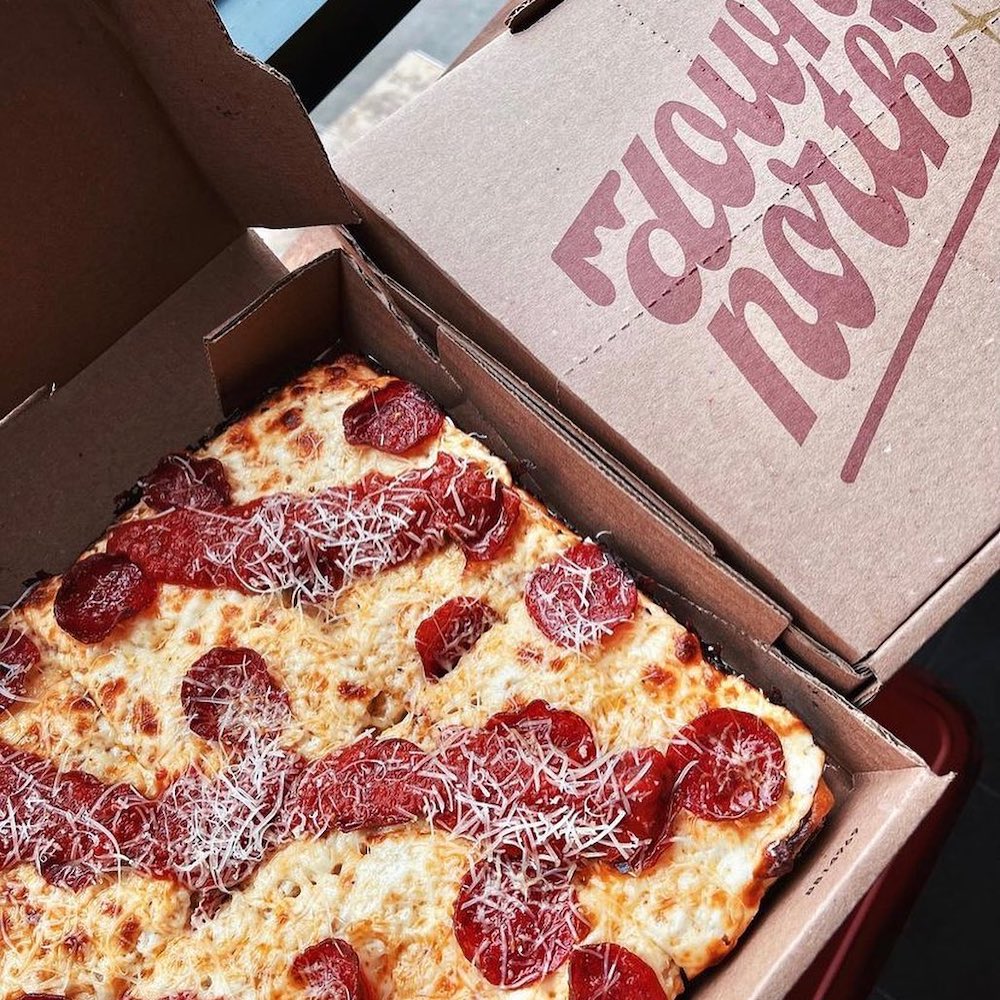 And one thing’s for sure: The staffers at Down North are learning how to make great pizza, a skill that can surely pay off if they’re given a chance. The Philadelphia Inquirer named Down North one of the best places to eat pizza in Philly this past spring. Philadelphia Magazine honored Down North for offering the city’s Best Square Pie in 2021. And in mid-October, the New York Times named Down North to its list of the country’s top restaurants for 2021.

“A mission like Down North’s—to provide gainful employment for the formerly incarcerated—would normally be enough to land a restaurant on any number of laudatory lists,” the New York Times article stated. “But the pizza (Detroit-style, delicious and well worth the trip beyond Philadelphia’s Center City) is why it deserves a place on this list.”