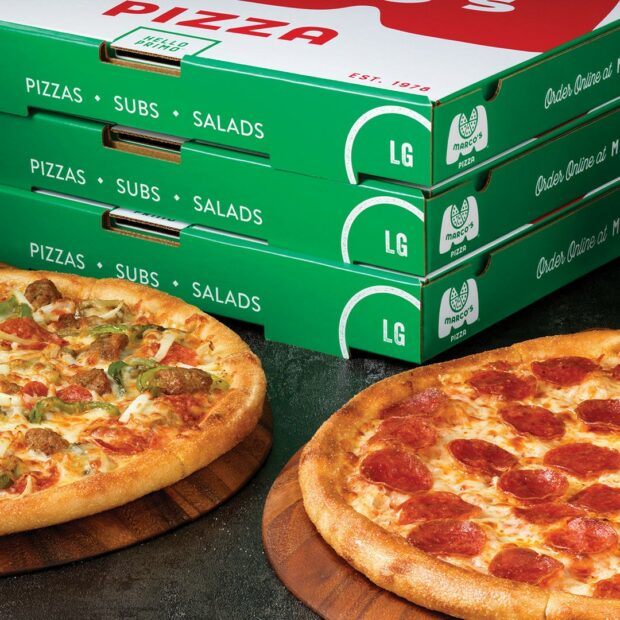 A pair of immigrants from farflung countries have partnered up to open Marco’s Pizza’s 1,000th location in late October. And, just in time for National Pizza Month, the brand will celebrate the milestone all month long with weekly specials for its customers.

Kattya Barbaran and Rafi Vargas will launch Marco’s 1,000th store in Kissimmee, Florida. Both immigrated to the U.S. with the dream of owning a business one day.

Barbaran moved here from Peru at the age of 20 and started working at a Burger King, where she quickly advanced to the position of general manager.

Vargas, meanwhile, grew up in the Dominican Republic and moved to the U.S. when he was 16. He served as a district manager for Burger King, moved on to Taco Bell for a while, and then was recruited by some former Burger King colleagues to go to work for the Marco’s Pizza operations team.

Barbaran and Vargas first met during their Burger King days and then worked together again at Marco’s, where she was hired as a general manager at the company’s corporate-managed store in St. Cloud, Florida. Eventually, they decided to become partners in their own Marco’s franchise.

“Kattya was the perfect match,” Vargas said. “She is an amazing operator. I thought, ‘Wow! This is the right partner.’ Everything happens for a reason. God is great!”

Barbaran said she had “an amazing two years” with the Marco’s brand, during which she transformed the St. Cloud store into one of the top performers in the system. “I’ve been able to be myself, grow the business and develop people,” she said. “I love developing people. It was a way for me to give back, just like someone else gave to me. It is priceless for me.”

“I live the Marco’s culture every single minute here,” Barbaran added. “I guarantee to everyone that works for me that they are going to be happy doing what they are doing. Happiness does not cost a cent. I cannot wait to have my own restaurant and even have it as a training restaurant to develop general managers. I love to help people reach their goals.”

On Monday, October 26, the brand will debut a special 50-percent-off pizza promotion at participating locations across the country. Marco’s will also conduct a series of “surprise-and-delights” to team members, providing $1,000 cash rewards as a thank-you for their role in the brand’s success.

“Reaching this significant growth milestone is cause for celebration,” said Tony Libardi, president and COO of Marco’s Pizza. “As a people-first organization, we wanted to celebrate this achievement with those who have helped us throughout our journey. This people-first mentality has been the secret to our long-term success—it’s our passionate franchisees, dedicated team members and loyal customers who have propelled this brand to greatness. We’ve built an incredible culture and look forward to the growth opportunities that lie ahead in our journey to the next 1,000.”