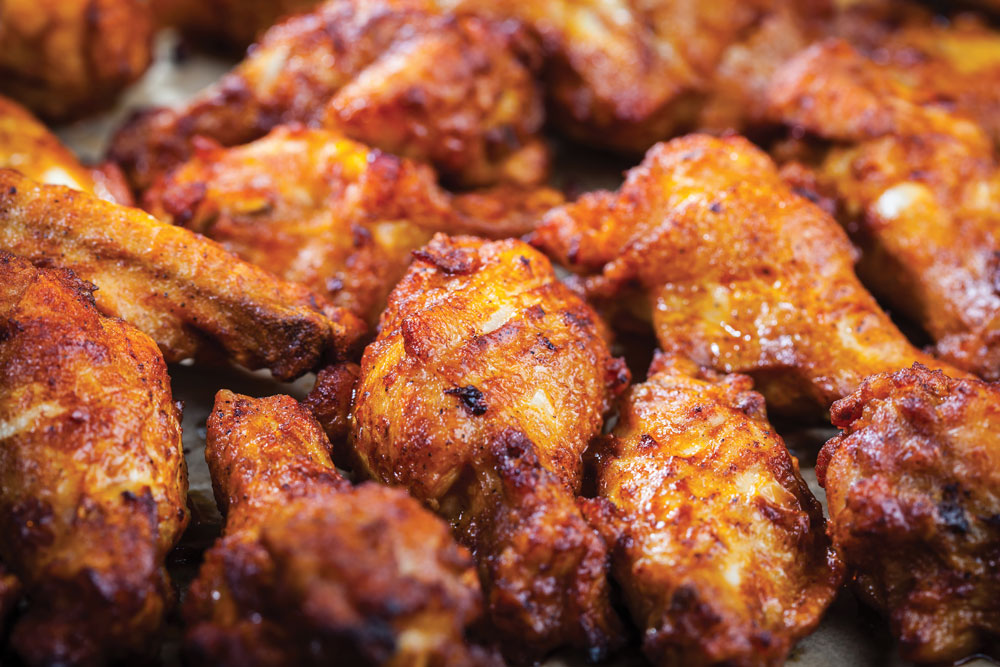 With college football bowl games in full swing and NFL playoffs just around the corner, families will be looking for the perfect snacks for their weekend gatherings, and what food goes with football just as well as pizza? Chicken wings, of course.

Some stats highlight the perennial popularity of this humble side item: The National Chicken Council estimates that 1.5 billion wings were consumed for last year’s Super Bowl weekend, with ranch dressing as the most popular sauce accompaniment. And in its 2018 Chicken Wing Trends Report, CHD Expert reported that there are more than 3,100 restaurants in the United States devoted to chicken wings. But, of course, pizzerias remain another widespread purveyor of this menu must-have.

Carol Hilker, author of Chicken Wings: 70 Unbeatable Recipes for Fried, Baked and Grilled Wings, Plus Sides and Drinks, describes the fascination with wings: “In the Danish or Nordic culture, they have hygge, which is the culture of coziness. For America, a version of our coziness is chicken wings. When fall hits, people say, ‘Let’s grab a pizza and some chicken wings and watch football!’”

Michelle Bucholz, marketing director of the Anchor Bar in Buffalo, New York, claims that buffalo-style chicken wings were invented at her establishment in 1964. The story goes that Teressa Bellissimo, one of the bar’s owners, was making chicken stock for a soup she planned to serve the next day. Her son, Dominic, was tending bar that night, and a group of his friends came in wanting something to eat at 2 a.m. Having already cut the wings off the stock chicken and set them aside, Teressa tossed them into a deep fryer, whipped up a sauce to coat them, and served them to Dominic’s ravenous friends. The rest is history.

Buffalo soldiers. Experimental flavor profiles may come and go, but the original buffalo-style wing is still the industry go-to. “We’re always trying different things, but it always goes back to the basics,” says Nick Carulla, director of operations for Jefferson’s, a wing chain based in Atlanta. “But trying to mimic that traditional buffalo-style wing can be easier said than done.”

Still, for operators who have nailed the perfect recipe, buffalo wings are practically flying out of the kitchen. “We’ve been serving wings for 25 years,” says Michael Hart, general manager of Kisling’s Tavern in Baltimore. “Your basic buffalo wing that comes drenched in hot sauce was the one we started with when we had only one flavor, and it’s still our most popular.”

Sweet and spicy. For customers who crave a break from buffalo wings, chefs offer alternatives with wing sauces and rubs that mix sweet and spicy flavor profiles. “Sweet and spicy or sweet and sour are age-old combinations,” Hilker says. “Korean chicken wings are a big thing now. The Asian flavor palate tends to have that sort of mix. You can also use honey on chicken wings to achieve those flavors.”

Indeed, at Kisling’s Tavern, sweetness and spice combine to delicious effect. “Our newest addition is the Honey Old Bay, which mixes Maryland Old Bay Seasoning mixed with honey,” Hart says. “We now offer those, along with our Mango Habanero and Sweet Chili Pepper wings. Those are three of our newest flavors mixing sweet and spice, and they seem to be really popular.”

The National Chicken Council estimates that 1.5 billion wings were consumed for last year’s Super Bowl weekend, with ranch dressing as the most popular sauce.

Bring the heat. Americans are gluttons for punishment, especially when it comes to wings—the hotter, the better—and wingmongers are constantly finding new ways to push the envelope. “Not too long ago, we added a sauce called Afterburner,” Carulla says. “Everybody wants that sauce that kicks your butt and is super spicy. But we don’t sell a ton of that one, because it is so spicy!”

Similarly, Jason McGovern, owner of Crush Pizza & Tap in Denver, entered a hot wing challenge this year, partnering with Flatiron Spice Company, which created spice flavors for his buffalo sauce. “The one we call the #3 is the hottest of them all,” McGovern says. “There’s a little Carolina reaper, ghost pepper and chipotle all flaked in there.”

Hilker has come across some unusual wing recipes over the years, including peanut butter and jelly, cola, green tea and strawberry balsamic. “Fruit flavors are always unusual, but flavorful,” Hilker says. “For example, pineapple habanero can go Latin or Asian. You could coat chicken wings with red velvet cupcake crumbs. People do some really out-there things.” 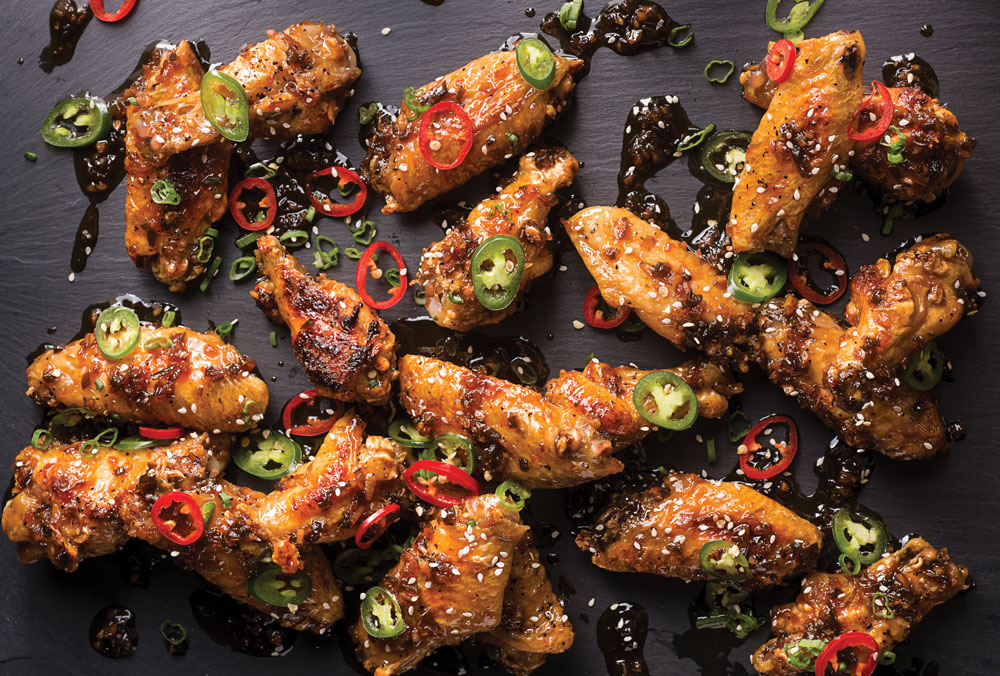 While the time-honored method of frying maintains its popularity, chefs are also experimenting with different cooking methods, such as smoking. McGovern uses a brine of beer, garlic powder, onion powder and other spices, soaking the wings for up to 48 hours. He smokes the wings over applewood or cherrywood for 45 minutes to one hour. Following the smoking, his wings are baked for 45 minutes to help the cartilage come off the bone. The wings are refrigerated until an order comes in, then grilled. After saucing, the wings are grilled one last time to caramelize the sauce. He then serves them with a housemade dressing, either ranch or blue cheese.

Hart identifies numerous cooking methods for wings, including baking, grilling and smoking. “One of my favorite places does a smoked wing,” Hart says. “The bird is smoked for two hours at 200⁰F, then char-grilled so it has the burn lines, like you would have on a steak cooked on a grill, then dipped in wing sauce. It has this plethora of flavors.”

Hilker notes that dry rubs and smoking are newer phenomena but adds that trends in barbecue tend to fluctuate. “One year it’s super-saucy everything, and the next year people like the dry rub,” she says. “Now, I think you’re seeing food simplifying down to the basics.”

At Jefferson’s, wings are fried, but Carulla advocates a longer fry time in order to achieve a crispier finish. “The wing will be done at about eight minutes, but we cook ours for 12 minutes,” he explains. Jefferson’s also employs a technique Carulla calls “double dipping.” “We toss the cooked wings in our spicy Turbo sauce and re-drop in the fryer for 30 seconds,” he says. “All of those seasonings stick to the wings, though the hot sauce comes off a bit, so it’s not too spicy but has a ton of flavor.”

With so many preparation, cooking and flavor possibilities, wings offer virtually limitless potential. “Wings aren’t for the faint of heart—they’re one of those things that you can really enjoy and play with the flavors, having fun and mixing it up,” Hilker concludes. “It’s a quick item to make, and usually pretty delicious!”