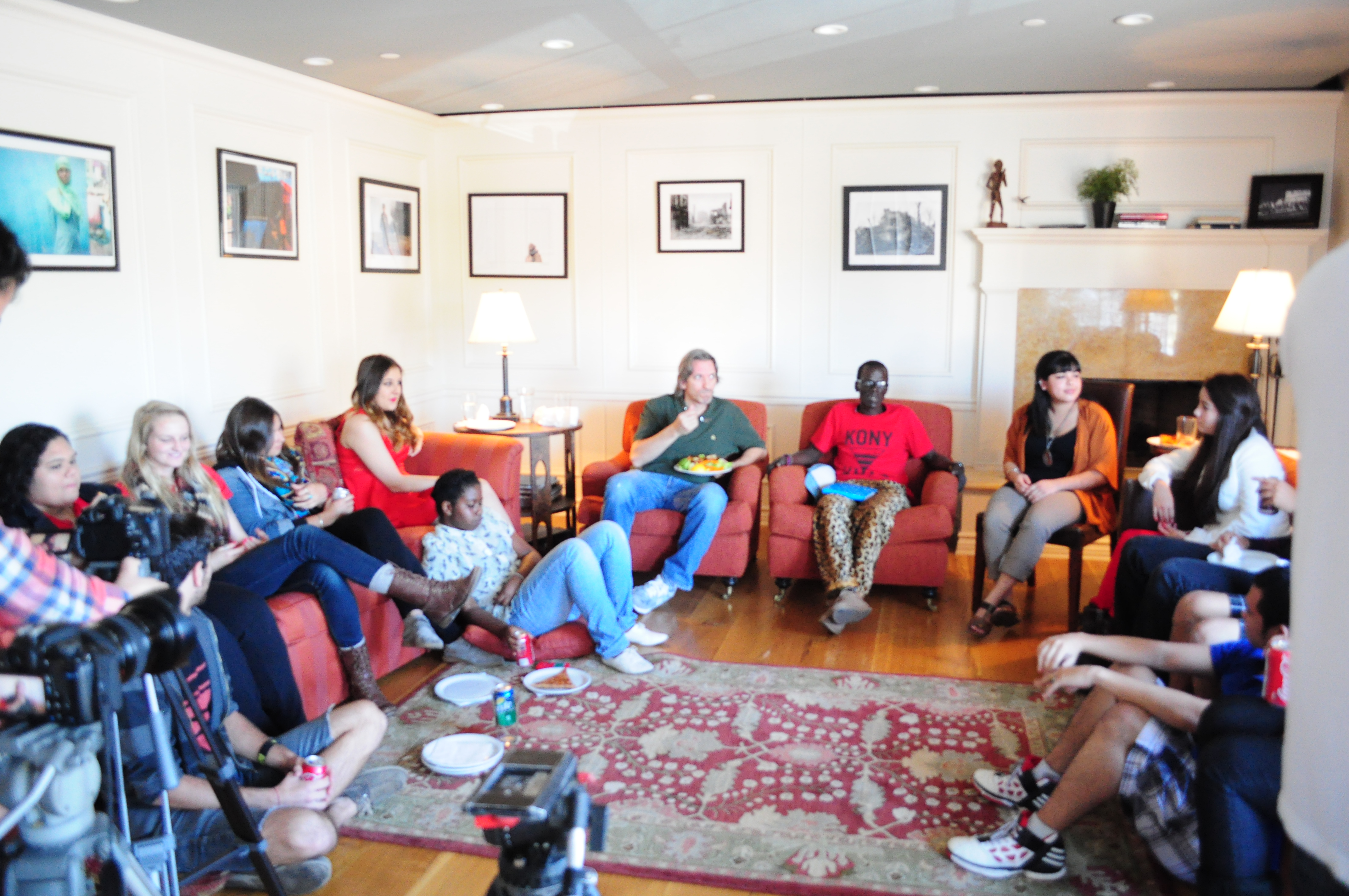 Recently we discovered a new web show, Pizza With an Icon, which brings teenagers together with an iconic figure for wide-ranging discussions while eating pizza. The show was created by Bonnie Abaunza, who co-produces it with Academy Award-winning composer Hans Zimmer. John Prendergast, a human rights activist and the co-founder of the Enough Project, was the first guest along with Quinto Okello of Invisible Children. PMQ’s Melanie Addington talked with Abaunza about this innovative online talk show.

What inspired the idea?

Abaunza: A number of years ago, I hosted an entertainment industry event (at the home of an actress) for Jose Ramos-Horta, Nobel Peace Prize winner and president of the nation of Timor-Leste. Because my daughter (who was in middle school at the time) and my high school interns wanted to meet him, the actress was very happy to have the kids come to her house before the event. The invite went out to the kids as “Pizza With a Laureate.”

One hour before the salon began, the kids arrived, greeted Jose and then sat on the living room floor, ate pizza and chatted with him. The kids poked fun at Jose for eating pizza with anchovies…

I also invited my good friend, Hans Zimmer, and his son (who was 10 years old at the time) to attend. The kids and Jose had a terrific time eating pizza and discussing a wide range of topics, from how he survived an assassination attempt to who was his favorite musician. The kids asked questions that adults would never dare to ask. The parents, who accompanied their kids, stood in the back and were stunned by how their children (many of whom were shy and reserved) opened up and had a great time with a man who had won the Nobel Peace Prize, a real change-maker.

Hans’ son then went home and researched Jose. When Hans and I saw how excited all these young people had been about the “pizza party,” we discussed the idea of creating a show where teenagers would have the opportunity to meet individuals from varied careers who are making an impact in the world. And so Pizza With an Icon was born. This is the first web series that Hans has produced. As co-creators and producers, he and I both hope that kids will be inspired by the icons they meet.

Zimmer: When the teenagers and kids meet these individuals—who are trailblazers in their fields—in a relaxed environment, they are honest and speak without filters. They ask questions that adults would be too cautious or inhibited to ask. So the interaction is dynamic, fun and inspiring.

PMQ: How can people see the show?

Abaunza: We launched the Pizza With an Icon channel on YouTube (also see first episode at end of this article) We did a “soft” launch on November 25th and will promote the first episode over the next few weeks. People can check out the website for upcoming episodes http://pizzawithanicon.com. We have filmed three segments thus far and expect to release two episodes a month. We will also be outreaching to pizza restaurants to inquire if one would be interested in partnering with us on the show.

PMQ: How are the icons selected?

Abaunza: We assembled a Youth Posse for the development stage of the show to give us input on format and whom they would like to meet. We want this to be driven by young people since they are our target audience. They want to meet scientists, journalists, athletes, astronauts, chefs, doctors, inventors, actors, filmmakers, philanthropists, entrepreneurs, comic book artists, etc.—different careers and fields of interest to young people.

PMQ: How are the teens selected for the show?

Abaunza: For the first three episodes, we invited middle school, high school and college students from Los Angeles to be part of the pizza party and conversation. We are interested in filming in other cities and are also interested in hearing from schools that may want their students or classes to participate. They can sign up on the Pizza With an Icon website. http://pizzawithanicon.com

PMQ: Why incorporate pizza into the format?

Abaunza: Kids love pizza! When you attend parties for kids or teens, pizza is served more often than hamburgers, hot dogs or other foods. With the diversity of pizza—from every possible topping to cheese-less, from organic to vegetarian to gluten-free—kids love to eat pizza…and so do the icons! It’s a great hook.

PMQ: Are there any social media or websites that people can follow to learn more about the series?

Abaunza: Yes, people can go to http://pizzawithanicon.com to learn about the series, the creative team behind the series, the Youth Posse and upcoming episodes. We just started a Facebook page  that will also have information. And, of course, the YouTube channel will show the episode.

To see the first episode, watch below: