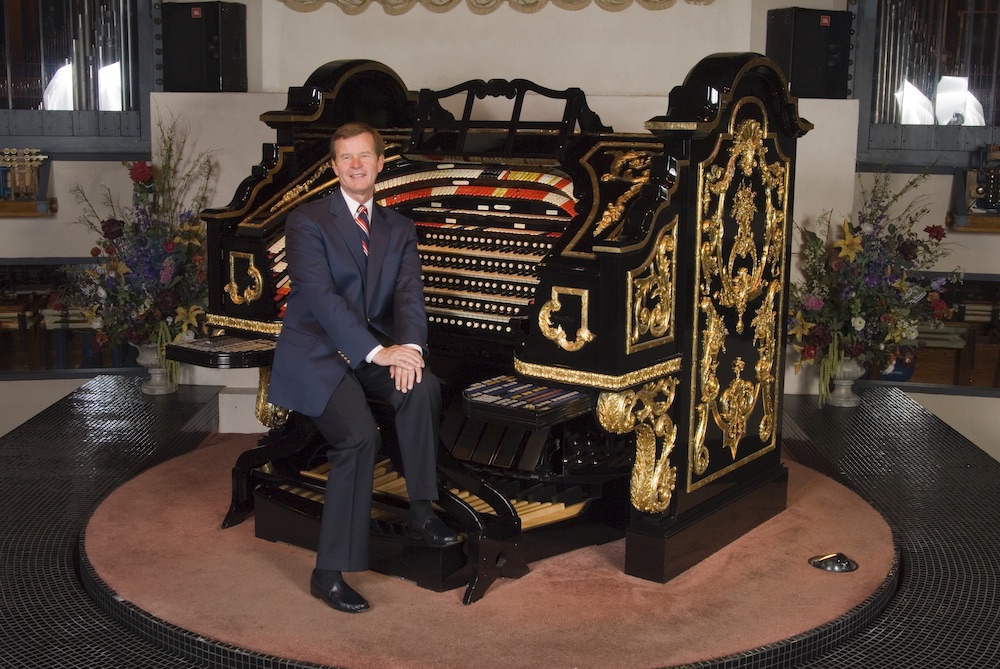 Organist Lew Williams is retiring from Organ Stop Pizza after 40-plus years.

After playing crowd-pleasing tunes on a majestic Wurlitzer organ for more than 40 years, Lew Williams retired last week from his regular gig at Organ Stop Pizza in Phoenix and Mesa, Arizona.

In an interview with a local TV station, Jack Barz, co-owner of the pizzeria, said Williams “helped shape Organ Stop Pizza into the restaurant that it is today … His goal in performing has always been to get each piece as close to the original as possible. He feels he isn’t doing the piece justice until he gets it completely perfect. That’s why customers marvel at his talents.”

Williams, a native of Lafayette, Louisiana, started playing at both locations of Organ Stop Pizza in 1979. He was just 25 at the time. “I really had no idea what to expect,” he told Fox 10 Phoenix recently. “I was just holding on for dear life and hoping it would keep going, and, lo and behold, it has.”

Williams also tours as a concert performer around the country and the world. He is one of three organists who entertain guests at the pizzeria, sharing the organ with Brett Valliant and fill-in organist Donna Parker, according to the pizza shop’s website.

The mighty Wurlitzer organ has nearly 60,000 pipes as well as numerous percussions and traps. Performances have included everything from dancing puppets to disco balls.

“I feel that everything has a lifespan,” Williams told Fox 10 Phoenix. “Everything has a productive time length, and things only last so long … I began to feel that it was time to step back and go have someone younger step in and continue on with younger ideas and take control.”

He said he will “miss the reactions” from Organ Stop’s customers. “When you have a really good crowd and they’re with you and you’re playing to them and they’re responding to you, there’s a very direct line of communication there, and that’s something you really don’t get anyplace else.”

“We are thrilled to have Glenn join organist Brett Valliant at the console of our mighty Wurlitzer,” Barz said. “This is an incredibly exciting time at Organ Stop Pizza!”

Relocating to Mesa from Chicago, Illinois, Tallar was twice awarded the ATOS Young Organist scholarship, allowing him to study with Jelani Eddington. A versatile musician, Tallar played baritone saxophone in bands throughout his high school and college years. He was the 2008 George Wright Fellowship Award winner, which gave him the opportunity to attend his first ATOS convention in Indianapolis. Tallar is not only an impressive musician, he also has the skillset to do extensive repair work on the organ, a huge benefit for Organ Stop Pizza.

Organ Stop Pizza lost another one of its veteran organists in 2019 when Charlie Balogh passed away from a stroke.

Phoenix real estate developer William P. Brown, a fan of organ music, opened Organ Stop Pizza in Mesa in 1975. He bought the Wurlitzer organ from Denver Theater and completely rebuilt the instrument, enlarging it from 15 sets of pipes to 23.