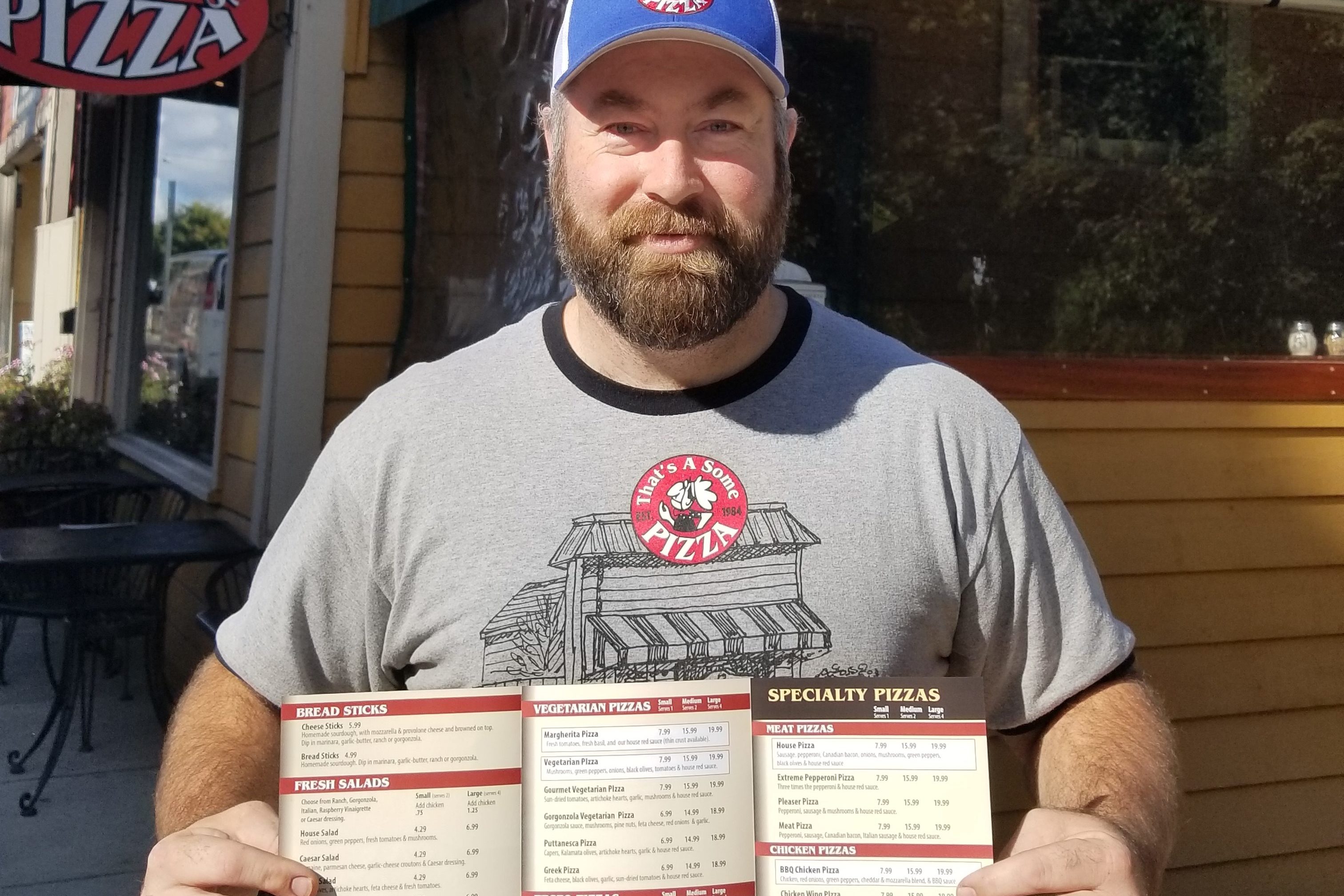 That's A Some Pizza owner Will Grant shows off his menu. Grant is gearing up to open a new pizza brand, Sourdough Willie's.

All his life, one mission has driven William Lawrence-Grant of That’s A Some Pizza in Bainbridge Island, Washington: make the world happier and healthier through pizza.

“Pizza used to be defined by cheap ingredients and, often, still is; there are certainly a lot of places you can get fast-food pizza,” said Grant. “For pizzaiolos who care about their craft, the idea of pizza has shifted. It’s no coincidence that this is [occurring] at the same time that people are becoming more aware of where their food comes from. Our goal is the use of fresh ingredients bought from local sources melded together in ways that, hopefully, people haven’t experienced before.”

He is one step closer to wholesome global domination by opening Sourdough Willy’s Pizzeria in Kingston, Washington this summer.

His pizzeria will bring a harmonious blend of traditional and contemporary styles to the Kingston locals.

“I want to bring pizza styles that people haven’t experienced locally — Roman, deep-fried Montanara, among others — using unique, fresh ingredients that are a bit outside the box,” Grant said. There will be robust vegetable toppings, truffle honey, pine nuts, and enough varieties of cheese to make a Norwegian proud. Included on the menu is his Caputo Cup-winning recipe: the Gorgonzola Vegetarian Pie.

This business plan is similar to the one used by his parents, Lee and Marti Grant, when they opened the pizzeria of his childhood, where his career began 35 years ago: That’s A Some Pizza in Bainbridge Island.

“They went to remote places where people didn’t have a lot of options, and they just knew it would do well. It’s a low price point when you make your own dough and shred your own cheese, so, it was a good business plan and allowed us to be creative,” Grant said in an earlier interview for PMQ’s Chef’s Corner.

All pizzas are made with a 120-year-old sourdough starter that an old miner brought from the Klondike Gold Rush days. (Grant recalled struggling to hold the intimidating 30-pound dough starter in a 32-pound can as a five-year-old kid during the opening week of That’s A Some Pizza in 1982.) Not only is the sourdough traditional, but the new restaurant will be a sentimental blast from the past. Grant has redesigned a sports bar into an “old-school-pizzeria-cool” spot for Sourdough Willy’s with classic red bricks, a full bar, and vintage charm in what Grant describes as “upscale but family friendly.”

There is a second component to his aforementioned goal: teaching the next generation of pizzaiolos in the Pacific Northwest. Grant is a certified pizzaiolo through Tony Gemignani’s International School of Pizza in San Francisco. He underwent the certification process because, after a childhood of working at his family’s pizzeria, he wanted to make his family proud when he inherited the business.

It was then that Gemignani encouraged Grant to compete in culinary events, saying that being in the business as long as he had been, the competition was needed. He competed for the first time for the Caputo Cup in Atlantic City in late 2017 and won Best Pizza in America in the Non-Traditional category for his Gorgonzola Vegetarian Pie. Since then, he has enjoyed being a competitive pizzaiolo. Earlier this year, he debuted at the World Pizza Championship in Parma, Italy, where he placed third for Americans overall (and was the only high-ranked chef from the Pacific Northwest) in the Pizza Due competition.

Grant plans to channel his decades-spanning expertise, including international competitive experience, by launching the Pacific Northwest School of Pizza, which will be held at Sourdough Willy’s in Kingston. Once in session, the school will train new generations of pizzaiolos, whether they aspire to open their own pizzerias or push the boundaries of their pizza-making skills in a home kitchen.

This summer is looking to be fruitful for this aspirational pizzaiolo, especially for his lifelong mission of making pizza meaningful and joyful worldwide.