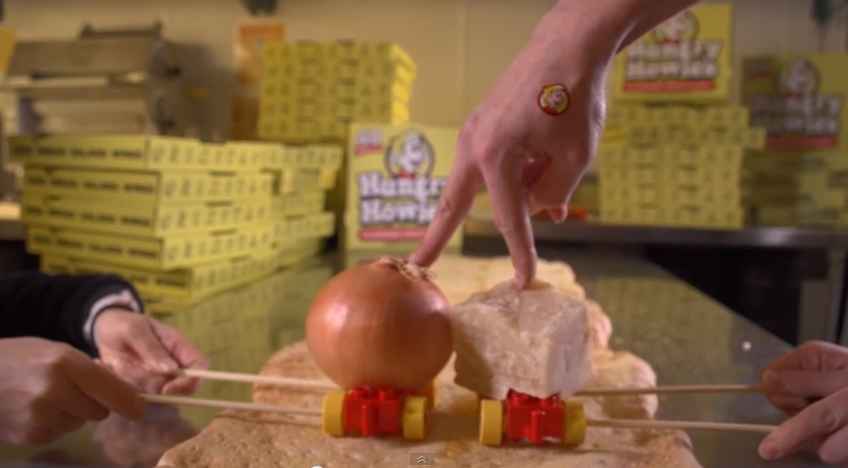 When DBA Worldwide, the ad agency for the Hungry Howie’s Pizza chain, spotted a viral video featuring Jean Claude Van Damme and two Volvo trucks, they instantly realized that the ingenious Youtube spot was ripe for parody. The video depicts Van Damme standing rigidly, arms crossed, between two Volvo trucks that are moving slowly backwards on an otherwise deserted landing strip. As the trucks gradually separate, moving further and further apart, the famously fit Van Damme executes a perfect split and continues to hold it, straddling the empty space between the trucks. Described as an “epic split,” the spot aims to “demonstrate the precision and directional stability of Volvo Dynamic Steering (which) makes the new Volvo FM easier to drive.”

DBA didn’t need a martial arts star to shoot the parody spot. They took matters into their own hands—literally, as you'll see—and threw in an onion, a hunk of cheese and a couple of tiny toy cars for good measure. The spot promotes Hungry Howie’s specialty Onion Parmesan crust, available only through the end of November (at which time the two flavors, as the video humorously illustrates, will perform an “epic split” of their own.)

The Van Damme spot has gotten more than 50 million views since it was published on Nov. 13. Hungry Howie’s numbers have been modest in comparison, but the parody was a hit with its customers and social media users. And, like the timely video response by Lou Malnati’s Pizza to Jon Stewart’s anti-Chicago pizza rant, the Hungry Howie’s spot demonstrates the power of real-time marketing with a pop-cultural punch.

PMQ asked Stephen Killar, senior art director at DBA Worldwide, to share the back story of the Hungry Howie’s video with us:

Q: How did this parody spot come about? What’s the story behind it?

A: We first saw the Volvo spot on Friday, Nov. 15th. Along with the truly inspiring stunt and the borrowed equity from Van Damme's introspective story, we were immediately captivated. The creative choices really propelled the spot to "epic" status. The choice to use Enya (for the soundtrack) was masterful. It touched so many demographics, and perhaps it drummed up a bit of nostalgia for the millennials.

The commercial resonated with us as many of our clients also have faced challenges and had to overcome obstacles to become successful. While this was important, there are also small milestones and victories that we can all celebrate. We used that insight to create a parody that involved one of these small "epic" moments. The creative was born out of this juxtaposition. Our spot was conceived over the weekend and sold to the client on Tuesday.

Our client, Hungry Howie’s, has been crafting flavored crusts for years. Hungry Howie’s offers (specialty) flavors either monthly or for a limited time. The current monthly flavor (Onion Parmesan) was going to expire at the end of November, and we wanted to engage our customers and let them know that they could be missing their chance to have an epic moment of their own by trying one of these crafted flavors.

Q: How long did it take to shoot the spot? Is this something that required a large team and a big budget, or could a smaller independent restaurant with a few creative people do this on their own?

A: The video took about an hour to shoot and was edited and ready for upload within a day. The production was a simple one with only one camera and a group of about five (people) working together to create the concept and complete it. An independent restaurant would do very well to utilize a similar strategy for engaging consumers on social media with relevant pop culture integration.

Q: From a marketing perspective, what was your goal for this video? Did you achieve that goal?

A: Our goal for this spot was to engage with our customers and continue to tell the Hungry Howie's story of how epic our passion is for flavor (without) using corporate speak. We want our customers to know we’re a fun and responsive brand that will go the extra mile—or at least five feet of flavored crust.

Q: What kind of response have you gotten?

Our brand fans enjoy this kind of engagement. We have over 240,000 Facebook fans, and they have responded through likes, shares, comments and posts.