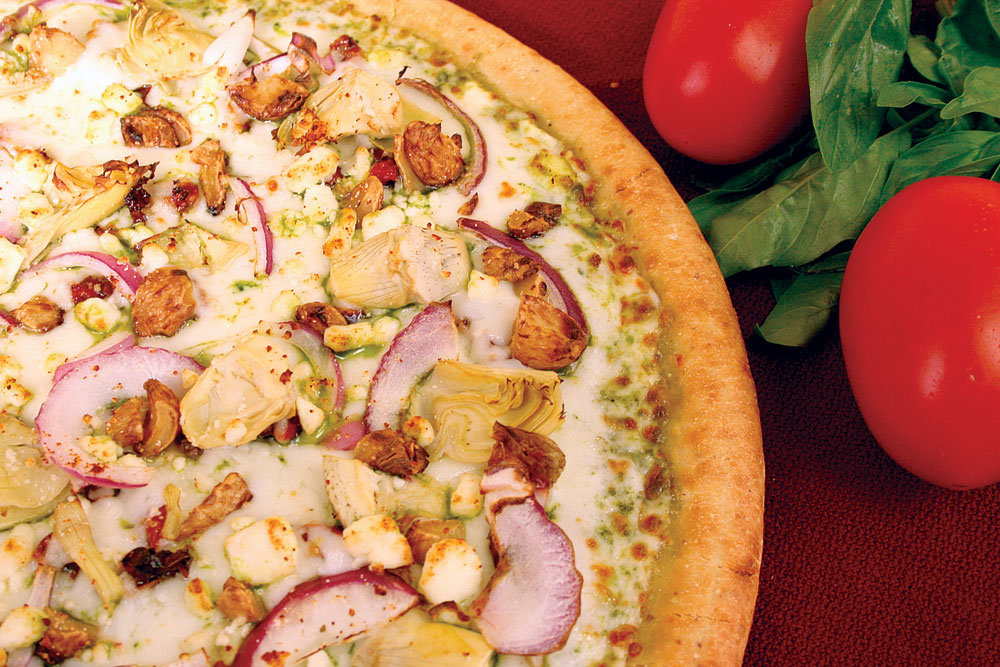 Although celiac disease is a real condition, going gluten-free isn’t a medical necessity for many pizza lovers; it’s a lifestyle choice.

Its prevalence in American society means gluten-free pizza has evolved into a style of its own, offered by companies ranging from the major national and regional chains to local shops and hometown food trucks.

But is the gluten-free gold mine nearly tapped out, or is it just starting to produce?

The no-gluten diet was actually introduced in the 1940s. But no one outside of the medical field paid much attention until nearly six decades later, thanks to an Italian doctor named Alessio Fasano. Puzzled as to why celiac disease was so rare in the United States, Fasano conducted a seven-year study, which concluded that celiac disease existed in one out of every 133 Americans, although most didn’t know they had it.

Once Fasano’s study was released, more studies followed, showcasing a variety of adverse effects that gluten (a protein complex present in wheat, rye and barley) could have on the human body. Adopting a gluten-free diet quickly went from being a doctor’s prescription reserved for celiac sufferers to the latest diet craze.

Following an explosion of gluten-free retail products, pizzerias of all sizes began introducing gluten-free pizzas around 2010, with letters pouring in from thankful celiac sufferers who were finally able to enjoy one of their favorite foods. By 2016, gluten-free diets, while necessary for those suffering from celiac disease or gluten sensitivity (about 1% of the population), had become all the rage among the general population, with 8% of Americans limiting their gluten intake. In fact, sales of gluten-free products are projected to rise to $7.59 billion by 2020, according to Statista.

For a long time, however, the problem with gluten-free pizzas was their taste. Fortunately, over the years, pizza chefs have developed better recipes, and gluten-free crusts have improved dramatically in flavor and texture, with more sizes and varieties being offered. The words “gluten-free” can now be found on thousands of pizzeria menus, as the target market has expanded over the years from those with celiac disease to those with gluten sensitivities and those who simply believe it’s a healthier option.

Still, the No. 1 priority when offering gluten-free pizza should always be protecting customers with celiac disease. Precautions must be taken, just as with shellfish and nut allergies, to safeguard those who may be negatively affected by cross-contamination. Celiac sufferers are still depending on you to help them make an informed decision about the pizza they eat.

No matter how careful you are with flour, tools and separate ovens, unless a gluten-free pizza is prepared in a completely gluten-free environment, there will be exposure to trace amounts of gluten at some point during the preparation process. There’s no point in hiding this fact, so the best practice is to put a disclaimer on your menus and website and to make sure your employees explain the risk to customers ordering gluten-free pizza over the phone.

Garlic Jim’s, headquartered in Mill Creek, Washington, had created a proprietary gluten-free pizza recipe and began offering it in all 16 of its stores by 2009, according to CEO Dwayne Northrop. “We’re really proud of our gluten-free crust, because it actually tastes like a pizza crust,” says Northrop. “But it was a challenge to make, because it doesn’t perform the same way as regular pizza dough.” 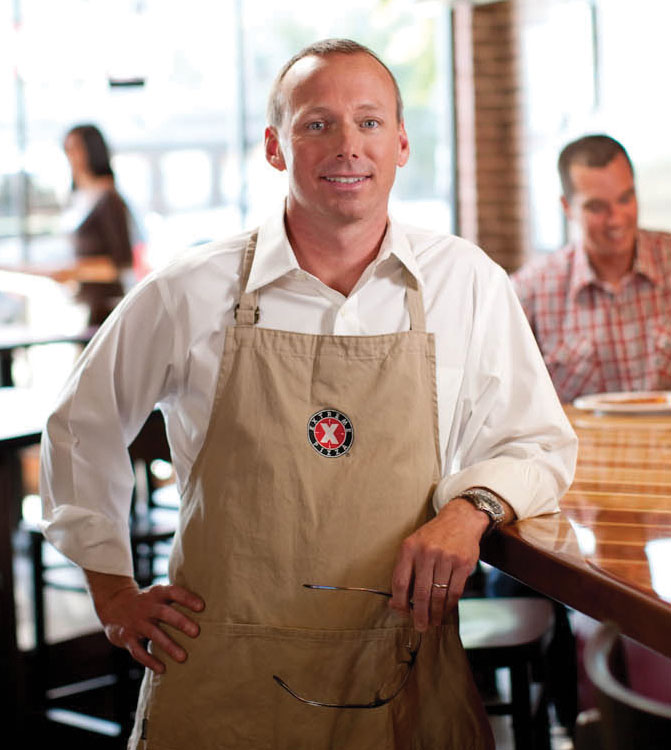 “You always want to have a disclaimer letting customers know that the restaurant itself is not 100% free of flour and other potential cross-contaminants.”
— Todd Parent, Extreme Pizza

Northrop says the pizza accounts for 10% to 20% of sales, with its stores in Washington and Oregon reaping the highest gluten-free sales on average. “We had a high around 2010 because there weren’t a lot of people offering it, and we were really making a big deal out of gluten-free,” he says. “Our franchisees were doing free samplings and approaching gluten-free groups during those first few years.”

Northrup notes that the restrictions have loosened up a little bit as far as needing to have each store inspected and certified by a celiac expert, but Garlic Jim’s still follows the same protocols it used in the early days of the offering. “We changed out the flour that we use to slap out doughs to a mix of cornmeal and rice flour, so there isn’t any gluten flying around,” he says. “We have different utensils, screens, peels, cutters and more.” Additionally, the 14” gluten-free crusts are created and par-baked in a commissary before being delivered to individual Garlic Jim’s stores.

“Gluten-free is one of the fastest growing segments of our menu, with sales above 10% or 12%,” says Todd Parent, CEO of San Francisco-based Extreme Pizza, which offers a pizza that’s both vegan and gluten-free in 40 of its 46 stores. “We switched to Smart Flour Foods pizza about two years ago when we dedicated a substantial portion of our menu to gluten-free and vegan and wanted our gluten-free pizza to be vegan, too.

“We’ve gone through a lot of training and think that our processes are very replicable,” Parent adds. “A lot of it is just the handling and separation of products. Of course, you always want to have a disclaimer letting customers know that the restaurant itself is not 100% free of flour and other potential cross-contaminants, but we can keep it almost 100% gluten-free.”

A housemade gluten-free pizza was on the menu when the fast-casual chain Blaze Pizza, based in Pasadena, California, first opened in 2012, and it’s still available at all of the company’s nearly 250 locations, according to chief marketing officer Shivram Vaideeswaran. “The last thing you want is to not give your customers a choice,” Vaideeswaran says. “Our gluten-free pizza has become one of our most beloved and asked-about products.” He notes that the company initially expected to sell the most gluten-free pizzas on the coast, but the style has been selling well everywhere.

Domino’s, headquartered in Ann Arbor, Michigan, was both lauded and criticized when it became the first major pizza chain to start offering gluten-free pies in nearly 5,000 locations across the country in 2012. While many gluten-free-lifestyle customers hailed the introduction of the menu item, serious celiac sufferers pointed out the potential for cross-contamination.

While developing the menu offering, Domino’s sought the advice of the National Foundation for Celiac Awareness (NFCA) to create a safe environment for its gluten-free pizzas. And while the NFCA could not approve the pizzas for celiac sufferers, they helped Domino’s create procedures and disclaimers alerting those with celiac disease that the gluten-free pizza is not completely gluten-free. “The gluten-free crust remains a great option for many of our customers and has sold consistently and steadily since its introduction,” says Jenny Fouracre, Domino’s director of public relations.

And, importantly, recognition by Domino’s of the style’s selling power led to other pizzerias—big and small—taking that first step toward gluten-free menu items.

Several factors can play into the growth or decline of an individual store’s gluten-free pizza sales. Additional choices are now available at more restaurants, and as operators and chefs gain a better understanding of gluten-free cooking, they’re creating new dishes for the gluten-intolerant crowd.

“We’re continuing to innovate with new offerings like desserts and salads that are gluten-free,” Parent says. “It’s great that other restaurants are offering gluten-free menus. It keeps us all innovating and bringing awareness to gluten-free, which will only get bigger.”

Vaideeswaran agrees, adding that he’s seeing gluten-free and vegan merging together now, which is why Blaze Pizza’s gluten-free pizza is also vegan, as is Extreme Pizza’s. “Most of the big players are offering gluten-free pizza now,” Vaideeswaran says. “It’s an important trend that keeps us ahead of the curve with dietary trends and ensures that we have options available for everyone. You never want to have to tell a customer, ‘Sorry, we can’t serve you due to a dietary restriction.’”

Having a gluten-free option shows customers that you have something for everyone, Vaideeswaran concludes. “It becomes less of a veto vote going forward,” he says. “If you have a friend who can’t eat from the menu, you’re less likely to go to that restaurant.”

Whether you’re exploring gluten-free as a new option or wanting to expand your offerings, consult with a nutritionist or celiac foundation to determine the best way to proceed.

Liz Foster is PMQ’s editor at large and author of Pizza: A Slice of American History. 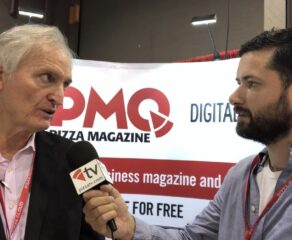 Save on Your Pizzeria’s Equipment Costs With Fastek