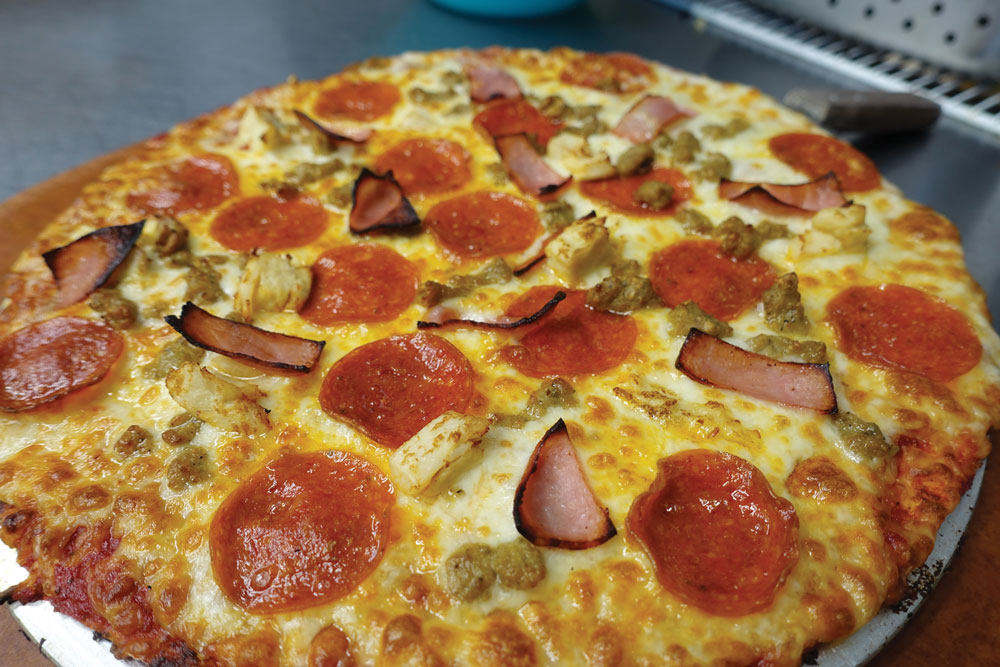 High fat, high protein, low carbohydrates. Sounds like a meat lover’s dream, right? That dream can quickly turn into a nightmare when dieters hear the two words no one should ever have to hear: No pizza.

You’ve undoubtedly overheard chatter about the ketogenic diet lately. Maybe you’ve even attempted the diet after learning about someone else’s incredible success. The controversial diet, with its roots (supposedly) based in science, has its pros and cons, but the basic premise is: When your body doesn’t have any carbohydrates to burn, it will turn to stored fat as fuel.

The original Ketogenic Diet began as a medical treatment formulated in the 1920s by Dr. Russell Wilder of the Mayo Clinic. Wilder discovered that a high ratio of fat to protein and carbs helped to decrease—and sometimes eliminate—seizure activity in epilepsy patients.

In the classic keto diet, 90% of calories come from fat. In today’s trendy keto diet, often associated with fast-track weight loss, fat percentages have been adjusted. According to The Charlie Foundation for Ketogenic Therapies, variations in the keto diet today can contain anywhere from 60% fat to 82% fat and 5% carbohydrates to 17% protein, depending on the plan.

As with any restrictive diet, dieters will inevitably start craving the foods they love. One of the most popular cravings on a low-carb diet is pizza. So, of course, there are numerous solutions and hacks to help keto dieters satiate their pizza cravings.

What is Keto Pizza?

Keto pizza is any form of pizza that contains the least amount of carbohydrates possible. We’ve seen “pizza” that replaces the crust with chicken, cheese, bacon and ground beef patties. You may not consider these creations (or, some say, abominations) pizza, but if you’ve ever gone a month without pizza, trust us, anything even remotely resembling pizza will taste good.

Most recently, recipes that incorporate nut flours, such as almond, coconut and pecan, have entered the fray. These additions allow keto dieters to experience a pizza crust that tastes closer to a traditional pizza than a slab of meat ever could. The nut flours are usually combined with cheese, cream cheese and egg before being par-baked and topped with ingredients. While many dieters are finding recipes online and making the pizzas at home, some pizzeria operators have decided to cater to the keto crowd and offer a special keto pie.

In September 2017, there were 5,400 monthly Google searches for the term “keto pizza,” according to data obtained using the Keyword Keg app. Less than a year later, in August 2018, that number grew to 14,800 monthly searches for the same term. The solo term “keto” was searched in Google 550,000 times last August.

Imagine the possibilities if your pizzeria showed up in the search results when a local pizza lover on the keto diet searched for pizza. After debuting a keto crust offering in August of this year, Ron Mathews, owner of Rockstar Pizza in Brownsburg, Indiana, doesn’t have to wonder anymore. “I’m having a hard time just keeping up with the demand,” Mathews says. “We’re selling a minimum of 100 keto pizzas on Saturdays, which is when we promote the offering.”

Mathews says he has several friends on the diet who were requesting that he make keto pizzas. “I decided that I would make enough keto crusts to last the week,” he says. “The first night, we offered the pizza from 4 p.m. to 8 p.m., and we sold out all 100 crusts by 5:30 p.m. That’s with no delivery. It was unreal.” The following Saturday, Mathews’ keto pizzas sold out by 6 p.m. In recent weeks, Mathews has also added—and sold out of—keto sandwiches.

As with anything in your pizzeria, you usually have a choice between personally making an item or sourcing it from somewhere else to save on labor and ingredients. Keto crusts are no different, if you can find a local bakery that specializes in the product.

For his new offering, Mathews chose to make his own crusts. “I use a blend of almond, pecan and coconut flour, along with seasonings, egg and sea salt,” says Mathews. “In a separate container, I mix and melt down a blend of cheeses until they are gooey.” So far, Mathews says the only way he’s been able to combine the two mixtures is by hand, not with his mixer, translating into a time-consuming process. “It’s like making bread in the 1920s,” he says. “I can make only four crusts at a time.” (See Mathews’ recipe below.)

Because of the hands-on nature of the keto crust production, Mathews only offers medium-size keto pizzas, and no specials. There’s also a $3 upcharge to substitute keto crust in place of a traditional crust. “While I may not be making a lot of money from the keto pizzas themselves, I’m seeing a lot of people coming back into the pizzeria, and they’re bringing their kids, who are not on the diet,” Mathews explains. “My tickets have been insane.”

If the keto offering sounds interesting, but the production sounds too time-consuming for your current operation, there may be options for outsourcing its production. At MJ’s Gourmet Pizza in Kitchener, Ontario, Canada, co-owner Julie Odysseos has been offering keto crusts since January 2017. “There’s a baker who makes keto items and provides the crusts for us,” Odysseos says. “She has her own business called Keto Eats & Treats, and she asked if we would be interested in selling the crusts.”

Odysseos took a poll to see if MJ’s customers would be interested in a keto crust and got a great response. “The baker also connected us with a keto group online, whose members were excited about us offering the crusts,” she says. “There are people out there who still want to have the fun of having pizza but also want to follow their diet.” And now, when those people are looking for keto pizza in Kitchener, MJ’s pops up on Google. MJ’s sells, on average, 30 to 40 personal-size crusts per week, according to Odysseos. “The smaller size is good, because when you’re on the keto diet, you don’t need a lot to feel full,” she says.

If there isn’t already a bakery offering keto crusts in your area, you can always reach out to your favorite baker and collaborate on a recipe that will work for both of your businesses and allow you both to cross-promote.

The Keto and Gluten-Free Connection

Reminiscent of the gluten-free offering, we’re now seeing consumers start to ask about keto offerings at pizzerias. Mathews says that some of his gluten-free customers have even transitioned over to the keto crust.

“There are people in a household who are doing keto, but maybe not everybody is,” Odysseos adds. “Now, they can get a regular pizza for the other family members and still have their own; nobody is left out.”

But beware: Mathews says that a keto offering inspires a lot of questions from customers, similar to the early days of gluten-free pizza. “They want to know the carb count of every single topping, which is really hard to calculate,” Mathews says. “I also struggle with so many people asking for the recipe, since I went through so much trial and error to get the crust right.”

Odysseos says she’s seen people drive nearly 100 miles to get keto crust, because they can’t find it where they are. “On Labor Day, a lady from our Keto Facebook group drove an hour and a half from Toronto to get a keto pizza,” says Odysseos.

As they say, “Where there’s a will, there’s a way.” Slowly and surely, all types of dieters will find a way to fit pizza back into their diet. Why not help ease their struggle with your own keto pizza?