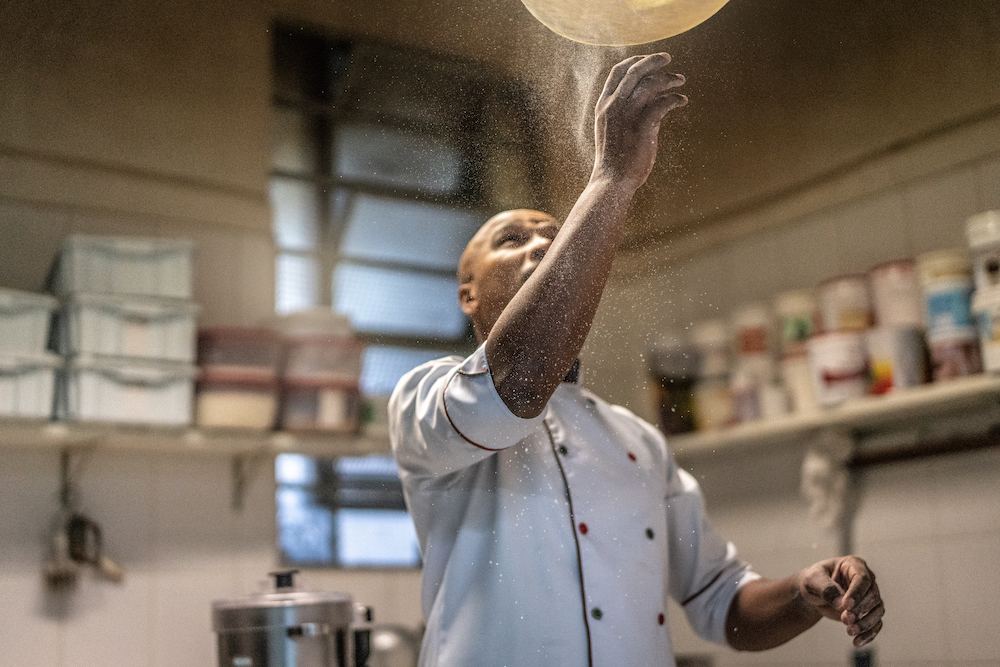 We currently hand-toss our dough, but with new stores opening we want to automate our dough forming operation. What is the best way to form our dough so it still looks like hand-tossed?

There are two preferred methods to use for a machine to produce a formed dough skin that gives a finished crust resembling a hand-tossed dough: Either a hot press or a modified sheeted/rolled dough.

Hot pressing does a good job of duplicating hand-tossed dough because the process does not de-gas the dough like a typical sheeter/roller does. Hot pressing, in effect, only redistributes the gas cells/bubbles already in the dough so they are distributed fairly evenly throughout the dough skin. This is similar to hand tossing except that, in this case, the gas bubbles are not evenly distributed throughout the dough. Hey, I didn’t say it was going to be exactly the same as hand-tossed.

The other method for duplicating hand-tossed dough is to use a sheeter/roller. But, wait, didn’t I just say that a sheeter/roller degasses the dough? Yes, but this is a modified sheeted dough method that we are talking about now. This forming method is modified in that the dough piece is not sheeted out to the full diameter, but instead, it is sheeted out to approximately two inches less in diameter than desired, and the dough is stretched by hand to achieve the full diameter. While this is not a one-step forming method as the hot press is, it is a way of duplicating a true, hand-tossed dough without the need to train employees in the skill of hand-tossing dough. This is also a great way to open the dough up with a uniform thickness and still get some of the showmanship of hand tossing. As a side benefit, I’ve found that I can train a person to hand-toss using this method in substantially less time than I can train them to hand-toss from a dough ball.

This method works well because we are not using the sheeter to open the dough ball up to full diameter. Instead, we are just opening the dough ball up enough to allow for hand-tossing or stretching to the finished size. This does not severely de-gas the dough, and the greater thickness allows for the development of a substantial raised edge on the finished skin/crust if that’s what you are looking for. By simply handling and stretching the partially sheeted dough closer to the edge, you can control the dimension of the raised edge. Yes, it’s a little more work than simply pressing a dough ball, but is also easier to master for new employees than fully shaping the dough by hand.

Q: We would like to have a sweeter taste to our sauce but we have heard that adding sugar can cause the sauce to scorch during baking.

A: You are correct in your understanding that the addition of sugar to the sauce will increase the possibility of the sauce scorching during baking of the pizza. I’ve used fine grated baby carrots to sweeten a sauce with some success. But several years ago, when flavoring a sauce, I stumbled across something else that seems to work pretty well too. That is the addition of powdered Parmesan cheese to the sauce. Actually, I’ve started adding both Parmesan and Romano cheese to my sauce as a flavoring material, but in addition I’ve found that I was able to significantly reduce the perceived acidity of the sauce, giving it a smoother, sweeter taste. This all makes sense as tartness is the opposite of sweetness, and if you can reduce the perceived tartness (acidity) you underscore or enhance the sweetness perception. With the addition of powdered cheese to the sauce, we have not observed any increased tendency for the sauce to scorch so that is no longer a problem. The amounts of powdered cheese to be effective in this regard are 1.25 ounces of Parmesan and 0.5 ounce or Romano cheese per #10 can of tomato product.

Q: I’ve heard you recommend that the yeast not be put into the water with the salt and sugar. Why is this?

If this isn’t bad enough, contained within that liquid is the amino acid, glutathione. Glutathione is very similar in its effect upon dough as is L-cysteine, the active ingredient in many dough-relaxing agents such as PZ-44.

So, by mixing your yeast, salt and sugar together in the water, you stand a good chance of impairing the ability of your yeast to function at its best. You also stand a chance of possibly getting a softer dough than you had bargained for if any glutathione should be leached out from the yeast cells. This is why we like to “play it safe” and recommend that the yeast always be kept separate from the salt and or sugar until they are all incorporated into the dough. The only real exception to this is in the case where active dry yeast (ADY) is used. In this case it is sometimes recommended that just a very small amount of sugar be added to the warm water in which the yeast is being hydrated/activated. In these small quantities, no harm will come to the yeast.

The late Tom Lehmann was a longtime columnist for PMQ and served as director of bakery assistance for the American Institute of Baking (AIB).