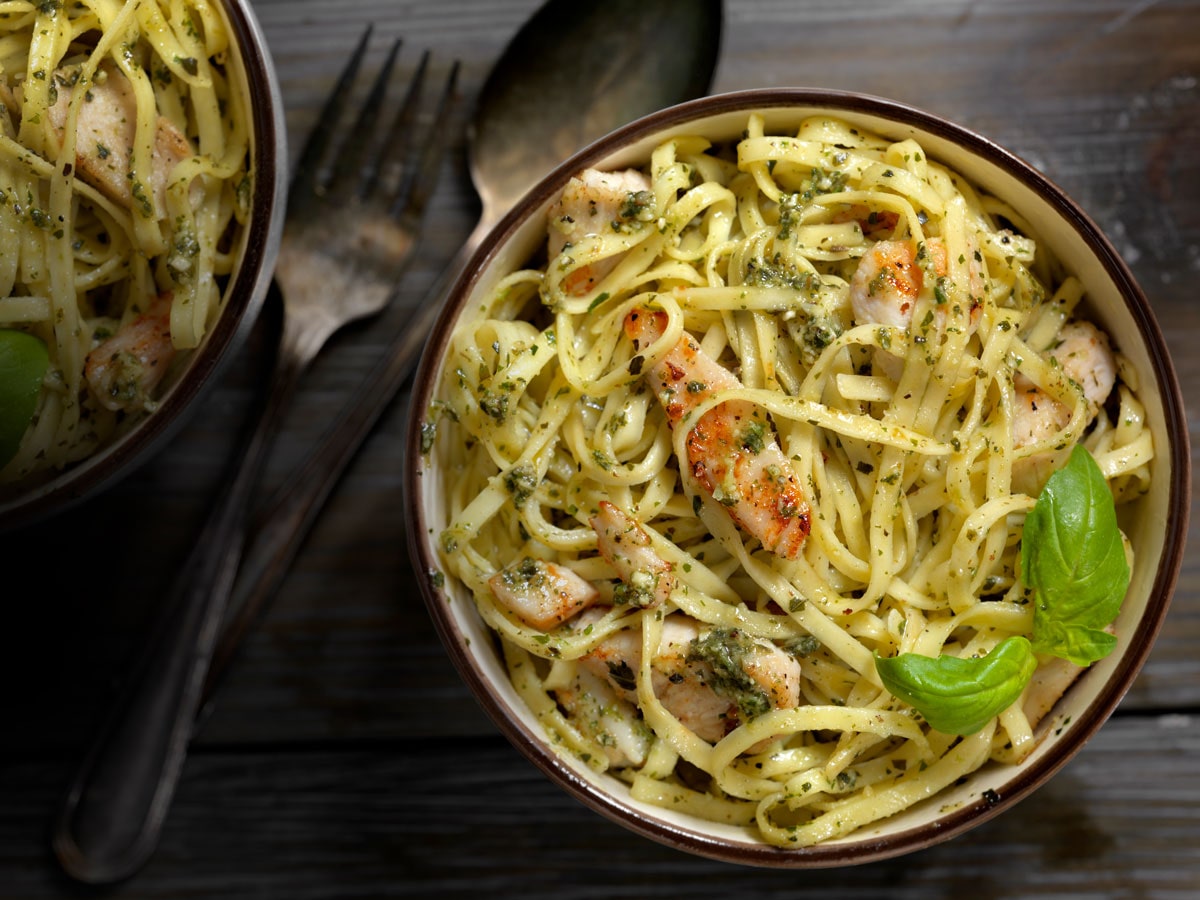 For many pizzeria and restaurant operators, a menu simply wouldn’t be complete without at least a few carb-licious alternatives in the form of pasta dishes. “Pasta rounds out our menu and elevates us so that we’re not ‘just a pizzeria,’” says Jeff Gosnear, vice president of Grotto Pizza, based in Rehoboth Beach, Delaware, with 23 locations. “With pasta, we’re a casual dining restaurant that features pizza—and, though it’s a really easy option for kids, every age group or demographic loves pasta. If they don’t want pizza, that’s usually their go-to!”

However, in today’s COVID-19 landscape—which prioritizes takeout and delivery—it’s also important to ensure customers have the same great at-home experience as they enjoyed when they dined in at your restaurant. Here, we present myriad ways in which operators can sell pastas with savvy, especially for today’s to-go demands.

“We focused on quality [carryout] packaging, and we found paper bags with handles that were heavy-duty, sturdier and easier to carry. And we put our logo on them.”
— Anthony Guerrera, Napoli Pizza Group

Whether you’re crafting a menu for dine-in or takeaway, it’s smart to build a solid pasta mix—without overreaching. For example, Grotto Pizza’s pasta menu has been greatly edited in pandemic times (along with its more limited staff and dining room capacity), to two selections: spaghetti and meatballs and chicken Parmigiana over pasta. Gosnear and his team evaluated what dishes would work best for carryout and delivery, but the pizzeria previously offered a wider range, including linguine with white clam sauce, ravioli, baked pastas, and a rotating seasonal-menu special. “We have ravioli with marinara on the menu, but ravioli specials always tend to do well, such as spinach-stuffed or mushroom,” Gosnear says. 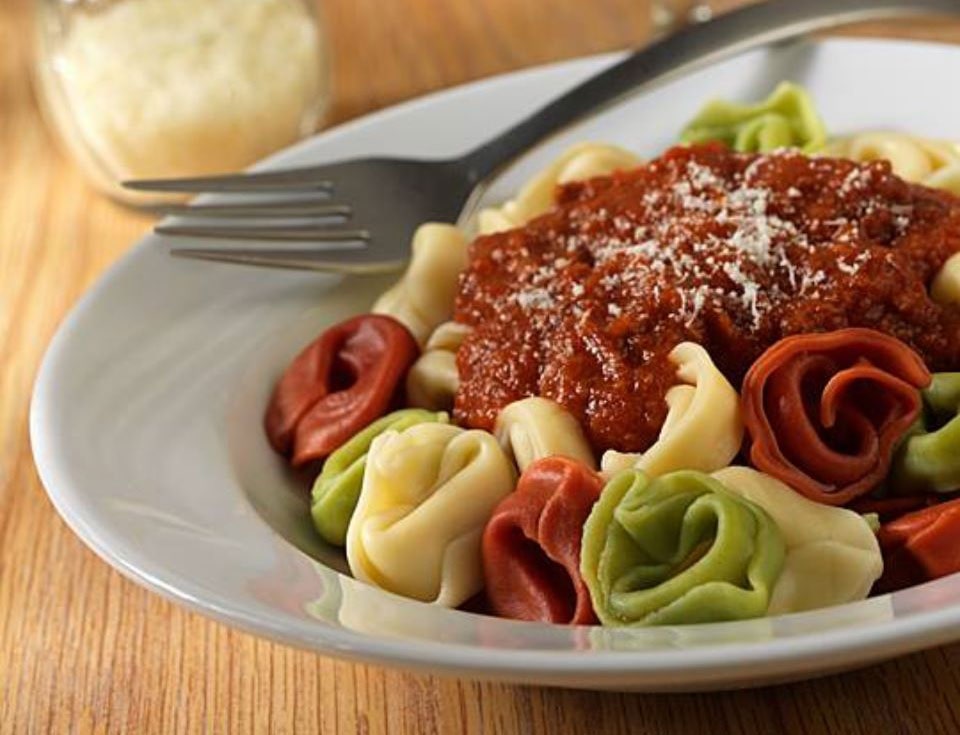 For Napoli Pizza Group, based in Vallejo, California, its third-party delivery menu was simplified to meet this year’s hefty increase in volume. (The pizzeria has three locations, and its smallest outpost has been traditionally delivery-based, even prior to COVID-19.) “Our lasagna definitely travels the best, since we cook it the night before, let it cool, and cut it up,” notes Anthony Guerrera, the company’s president. “It forms a square that’s a compact, solid piece. It looks great when you get it home, and it’s our best value, for $10.95 with garlic bread. It’s a lot of food!”

Related: Check out this recipe for homemade pasta

While menu editing, Guerrera also kept in mind the difference in expectations of dine-in vs. takeout and delivery customers. “When people dine in, they’ll order a beer or wine and appetizer, so time can go by [before it arrives at the table] and they accept that,” he says. “But now, post-dine-in, they want it as quickly as they can get it, so we removed some menu items.”

2) …But offer something for everyone.

“Something for everyone” can take various forms, from feeding a family to accommodating individual dietary restrictions. For example, Napoli offers a variety of housemade sauces and, although servers discourage substitutions, happily accommodates dietary requests. Its meat sauce contains pork, so staff can suggest adding beef to marinara instead or an alternative, like pesto cream, Alfredo, or butter and herb.

At Pizza Factory, based in Oakhurst, California, with 104 locations, a vegetarian customer can create his own pasta dish by requesting Italian dressing instead of meat sauce on spaghetti or choosing particular vegetables, like only carrots and broccoli. “We try to make sure we have menu items that will fit for anybody,” says Mary Jane Riva, CEO and president.

Meanwhile, family-style meals have also taken off this year, like at Mia’s Italian Kitchen, with two locations in Orlando, Florida, and Alexandria, Virginia. As customers sought easy takeout options during shutdowns, Mia’s in Alexandria repurposed its location to offer a walk-up window to sell pizzas and pastas. “We thought people would be spending time at home and have the challenge of getting dinner for four or five, so we expanded our family-style offerings—things that travel well and offer great value, as well as top dine-in sellers,” says Brandon Whitestone, corporate chef and partner at Alexandria Restaurant Partners, which owns and operates Mia’s. “We took away some of the longer pastas, like spaghetti and fettuccine (which can clump together), and focused more on rigatoni and penne for better travel. These dishes don’t lose quality from the restaurant to the house.”

The biggest seller at Mia’s is the rigatoni Bolognese, but the restaurant also offers zucchini noodles and recently added a gluten-free pasta imported from Italy. That’s Mia’s vegan option as well (since the regular housemade pasta contains eggs), and vegan mozzarella is always in stock.

“At least once or twice per month, we highlight a pasta as a pairing with pizza or other items. With so much delivery right now, people will order both, so they have two meals for the day—pasta for lunch and pizza for dinner.”
— Mary Jane Riva, Pizza Factory

3) Ace your packaging and presentation.

No customer wants to get his food home and find it a jostled mess—or, worse, barely lukewarm—so packaging is a key piece of the pasta puzzle. In what turned out to be a blessing in disguise, COVID-related interruptions in the springtime forced Guerrera to seek out new packaging for to-go orders. “We focused on a quality packaging replacement, and we found paper bags with handles that were heavy-duty, sturdier and easier to carry,” he says. “And we put our logo on them. The bags cost more, but I think it’s worth it—it makes for a better experience.”

Whitestone, too, played around with packaging, as the concept formerly used high-end aluminum containers that became unavailable due to supply issues. “With the portions we give (feeding four people, with leftovers), we use heavy-duty half and full hotel pans, which are reheatable,” he explains. “We take just as much care plating for to-go orders as we do in the restaurant. We also do a test order occasionally to see how it arrives.”

Riva adds that pastas generally hold up well, but they’re also easy to reheat if the customer doesn’t want to eat right away or has leftovers. “People can just throw them in the oven or microwave,” she says. “We package them in aluminum foil containers, which traps in heat, and we use insulated delivery bags and make sure it stays flat in transit.”

The meatballs, lasagna and slow-simmered meat sauce at Pizza Factory, all made from scratch, remain perennially popular. “Both are great sellers, since it’s not a cookie-cutter dish that looks like it came out of a machine, but like something you made at home,” Riva explains. “People want comfort food right now that feels like it has come from their own home, especially with everyone ordering so much takeout and delivery.”

Similarly, the housemade sauces at Mia’s stand out via high-quality ingredients and careful prep. In a unique twist, the cacio e pepe blends smoked cream cheese with heavy cream, toasted peppercorns and Pecorino (served with bucatini). The six-hour Bolognese is a huge seller, while the 12-hour Nonna’s Sunday Gravy, served over rigatoni, has become a signature favorite. “When putting a pasta dish on the menu, one thing that gets overlooked a lot is pairing the sauce to the noodle,” Whitestone adds. “I always try to look at classical dishes for great pairings and do a modern interpretation—you don’t want to put a heavy meat sauce over angel hair!”

Grotto Pizza’s portions are large enough to provide more than one meal, which appeals to value-conscious families. And, since Grotto purchases premade dry pastas, they equate to high profit margins: a 23% cost, on average, and no more than 28% to 30% for the higher-end ravioli.

At about 6 cents per ounce, Napoli finds its highest profit margins in spaghetti—and, luckily, it also outsells other pastas. For back-to-school season a couple of years ago, Guerrera introduced spaghetti for a family of four, with meatballs and garlic bread, for $30. The family-style meals eventually became a permanent Monday-only promotion to pep up a traditionally slow day. “It kept customers thinking about Napoli at the beginning of the week,” he says. “Nowadays, it’s an easy way to take care of the family with a one-plate meal, plus leftovers.”

When pushing its seasonal menus, pastas are plastered across Grotto’s Instagram and Facebook pages, and the company alerts its Swirl Rewards program members via email. “If we’re not featuring a pizza, we’re almost always featuring a pasta,” Gosnear says. “You can’t take a bad photo of a pasta dish. The red sauce contrasts with the pasta, and a little basil makes it look alive very quickly.”

Meanwhile, Napoli’s ravioli with meat stuffing is crafted throughout the week—and remains a top seller and top value. Therefore, that process, from stuffing to sauce making to assembly, is documented and shared through short video snippets (four to six seconds) or photos, then distributed on Twitter, Instagram and Facebook and via e-newsletters.

And for customers who just can’t decide, why not offer pics with pairings? “We’re often posting pastas on social media as an alternative, especially now that people are ordering out so much—to show that we’re not just pizza,” Riva says. “At least once or twice per month, we highlight a pasta and show it as a pairing with pizza or other items. With so much delivery right now, people will order both pizza and pasta, so they have two meals for the day—pasta for lunch and pizza for dinner.” 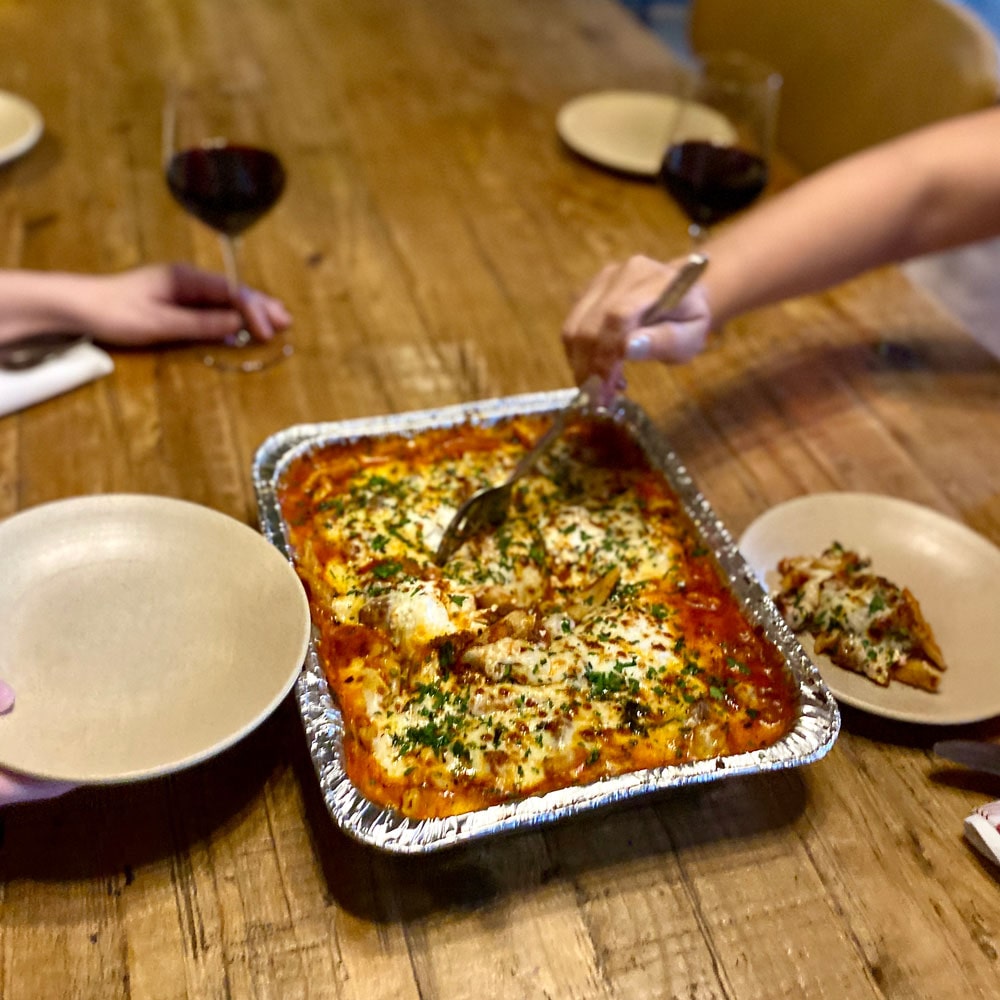 In a large pot, cook the ground beef until it renders out. Remove the beef from the pot and drain half the fat. Cook the celery, onion, carrots and garlic until translucent. Add the tomato paste and cook for 2 minutes, stirring with a rubber spatula. Add the beef back in, as well as the red wine. Cook until reduced by half. Add the tomatoes, bay leaf, dry oregano, crushed red pepper and salt. Cook for approximately 45 minutes, until thickened. Add fresh basil and oregano. Check the salt level and adjust as necessary.

Cook fresh rigatoni until less than al dente (time varies based on pasta). Toss with 2 qt. of Bolognese and put into a half hotel pan. Divide ricotta over the top and add the mozzarella. Bake for 10 minutes until the cheese melts.