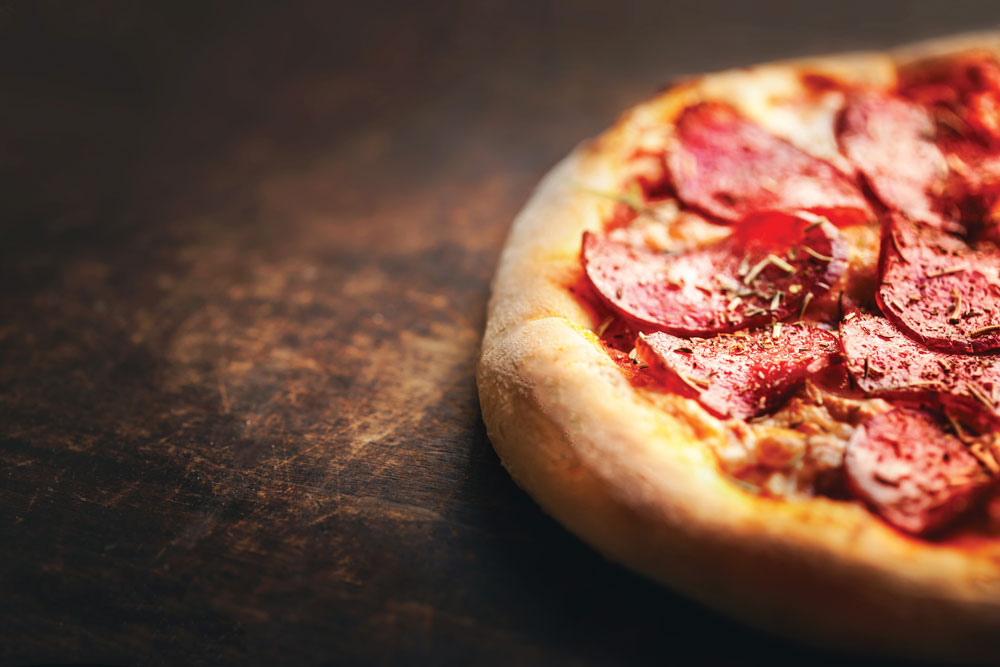 When we hear a pizza aficionado describing a really great pizza, it’s seldom the cheese or the sauce or even the toppings they refer to. It’s the textural properties of the crust, whether light and tender, crispy or chewy. So what’s the secret behind these important characteristics?

You might think it’s the flour, the fermentation time, the dough mixing time, the dough absorption rate, the yeast level, or simply how the pizza is baked. And you wouldn’t necessarily be wrong—all of these factors impact the textural properties of the finished crust. But the one common denominator associated with all of them is their effect upon the cell structure, or crumb structure, of the crust. And that, in turn, has the greatest impact on the textural and chewable properties of the pizza.

What most of us—including our customers—are looking for is that nice, open, porous (some call it “airy”) cell structure in the finished pizza. It’s probably a little more complicated than you might like, but here’s how it works.

Drilling Down to the Cellular Level
To begin, we have to understand how the cells are formed and how each of our ingredients affects the cell structure. The cell structure of the dough is created during the mixing process, in which each cell’s nucleus is formed by incorporating air into the dough. These nuclei expand further into the cell structure through the action of leavening gas created by the yeast and through heating and expansion of those gases. Water is also vaporized during the baking process, further expanding the cells.

How does all of this impact the textural properties of the crust? Since pizzas are baked from the bottom up, a more open (larger) cell structure creates a better thermal break between the bottom of the crust and the moisture-laden sauce and toppings. This means that the crust will brown more rapidly and exhibit better bake-out (moisture loss) during baking, resulting in a crispier crust—and will retain its crispiness for a longer time after baking.

With a smaller cell structure, the thermal break is less efficient, allowing heat to pass through the denser dough. There, it’s dissipated as steam from the moisture in the sauce and toppings. In this case, the crust will be slower to brown, and it will not lose as much moisture during baking. In fact, it might even collapse as the pizza is removed from the oven, resulting in a dense crust with tough or excessively chewy eating properties.

So that’s what’s happening at the cellular level. To get a better idea of how your dough ingredients affect cell structure formation, we need to look at each ingredient separately.

Flour and Protein Content
The higher the protein content of the flour, the stronger the flour usually is, as evidenced by the excessive dough memory or snap-back it can contribute to the dough. This is referred to as dough elasticity. As dough elasticity increases, the resistance to expansion of the cell structure also increases. So if we change to a higher protein/stronger flour, we could very well experience a loss in that all-important cell structure or, at least, a smaller cell structure, thus reducing the thermal break. The result is a loss of crispiness, and that’s probably not good.

You could use a lower protein flour, of course, but higher protein has a big advantage: It allows you to ferment the dough for a longer time while retaining dough strength. The increased fermentation time has a mellowing (softening/weakening) effect upon the gluten-forming proteins in the flour, which provides for greater dough extensibility while also allowing for the formation and capture of more of the desirable leavening gases created during fermentation.

It’s important to note that this is a slow process, so the cells are expanded gradually, resulting in larger individual cells. And that’s what many of us look for in our finished crusts!

Water and Vapor
As the water/dough absorption is increased, the dough becomes more fluid, softer and more extensible, all of which contribute to a larger crumb structure. Additionally, a portion of the water is converted to vapor and steam, which combine with the leavening gas to open the cell nuclei into a larger crumb structure. But be careful here: Too much water will make the dough too soft and fluid, leading to excessive or rapid expansion of the cell structure during baking. In this case, the dough may collapse, destroying the crumb structure—and your vision of a nice, crispy pizza.

Yeast and Fermentation Time
The yeast level is responsible for both the softening of the gluten structure through fermentation and for producing the leavening gas (carbon dioxide), which helps to open the nuclei into the larger cell structure we want to achieve. To an extent, the more yeast that is added to the dough, the more prevalent and larger the cell structure will be. However, with sufficient fermentation time for the yeast to produce carbon dioxide, even very small amounts of yeast will produce more than enough leavening power to produce a very open and porous cell structure.

Salt and Gluten Structure
While we usually think of salt as a flavoring ingredient, it’s also largely responsible for regulating the rate of fermentation and strengthening/toughening the gluten structure of the dough. But too much salt can slow the fermentation rate, so the necessary effects of fermentation (dough extensibility and production of carbon dioxide) may not be achieved. In this case, the gluten structure will be further toughened, increasing elasticity, which in turn inhibits cell expansion within the crumb structure.

Fortunately, this problem can be addressed to a great extent by adding more yeast to compensate for the higher salt level.

Oil and Shortening
Added fat also plays an important role in cell structure development and expansion. It both lubricates the dough for ease of expansion and coats the individual cell walls, which helps them better retain leavening gas and water vapor. This may allow them to expand to a greater size without bursting or coalescing into fewer but larger cells. In some instances, however, this coalescing of cells produces the crumb structure we’re looking for, which explains why some dough formulations don’t use fat/oil at all. As long as the coalescing is not too severe, the cell structure will retain sufficient strength to support the weight of the toppings and still provide the necessary thermal break that makes a crispier crust.

Sugar and Yeast Activity
Finally, let’s take a quick look at sugar. This ingredient will influence the way the crust bakes, which can impact crispiness, but it has no direct impact on the cell structure of the crust. Even so, in some cases, the sugar will provide a nutrient for the yeast to feed upon, which in turn will help to ensure good yeast activity during long fermentation periods. And good yeast activity, as we said before, makes for better cell structure!

The late Tom “The Dough Doctor” Lehmann was a pizza industry expert and consultant on dough matters. This article originally appeared in the January-February 2018 issue of PMQ Pizza Magazine.