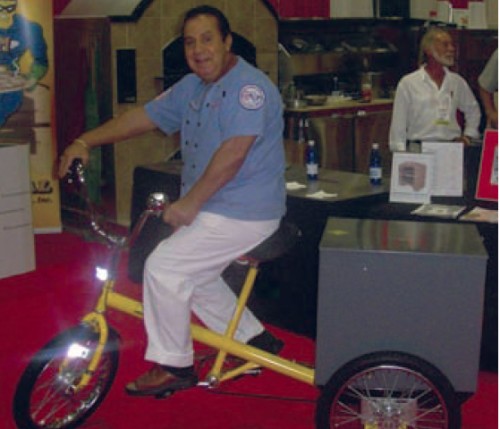 At a recent Washington D.C. hotel restaurant show, I was preparing food and saw many mouths watering in anticipation except for one person that I noticed staring at me and not eating. I felt a bit uncomfortable seeing this well-dressed man watching me with such curiosity. I asked him if he wanted a slice or if he'd like to check out the oven.

"I would like to talk with you when you have time," he replied. Although I was very busy, I asked him to give me a minute. He sat and waited for a while, and I continued to cook and talk to potential customers. I couldn't help being impressed by his patience and demeanor. Finally he and I walked around to find a place to sit and talk, but nothing was available except a shoe shine stand. The gentleman gave the shoeshine man a $100 bill and told him to come back in 20 minutes. Needless to say the shine man was pleased. The gentleman introduced himself as Alfredo Hoyos Mazuera, from Pereira, Columbia. He told me he was the largest poultry producer in Columbia. "So you're in the chicken business?" I responded, which got quite a laugh out of Mr. Hoyos. He was actually interested in starting a pizza chain in that country. My surprise turned to astonishment when he told me there was no mozzarella in his part of the world. I have seen the problems of pizza supplies, or lack thereof, before. An even bigger surprise was when he said he had all the machinery ready to make the mozzarella. I could tell Mr. Hoyos was a very intelligent man, so I decided to help him in making his mozzarella, which is not my normal procedure. The training began in the factory of his poultry business.

My new friend from Columbia was very pleased, but I still advised him the mozzarella wouldn't be perfect the first time; he would learn a lot of technique along the way. "Remember," I told him, "just like pizza dough, practice makes perfect." We opened the first store, which we named Frisbee Chicken, in Pereira, a very beautiful city where the people are most cordial. They even surprised me with a birthday party and cake when I was there. Today Frisbee is the largest pizza chain in Columbia. When it was time for me to leave, I was very sad. We drove to Cali, which is the MOST beautiful city I've ever seen. I stayed at the Intercontinental Hotel for two nights and was introduced to many locals by Mr. Hoyos, which opened a lot of doors for me in Columbia. The trip was great and I have returned twice since. If you are ever in Columbia and go to Frisbee Chicken, you'll know who the engineer is. And by the way, the people don't sleep in straw beds!

PS: In case you are wondering about my procedure for making your own mozzarella, see my article from the March 2004 issue of PMQ or read it online at
https://www.pmq.com/mag/2004march_april/cheese.shtml.