Lou Caputo: Making the Most of the Mighty Mushroom - PMQ Pizza Magazine 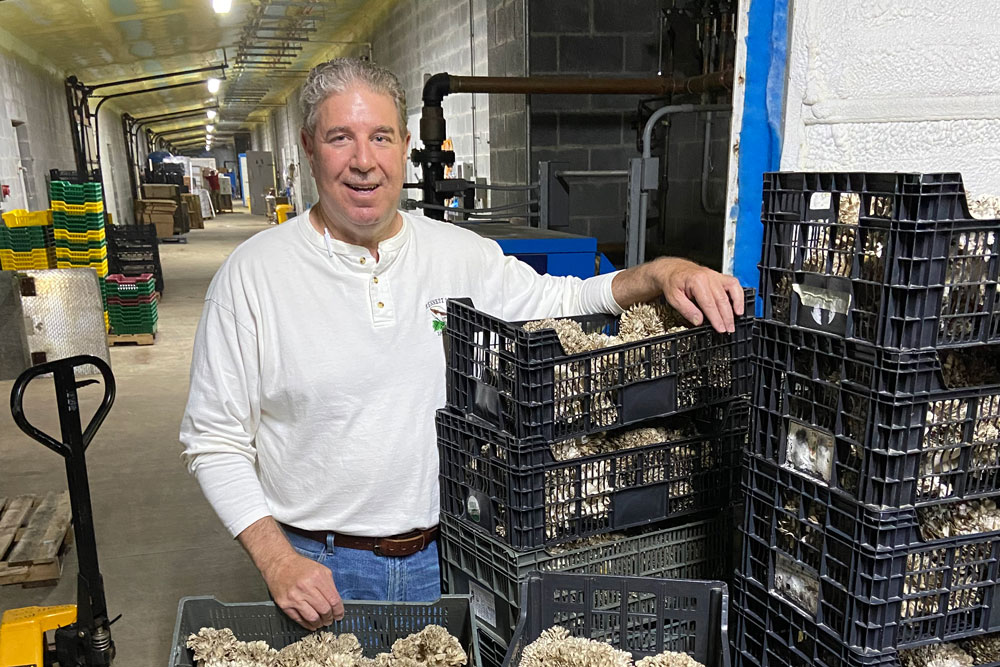 When you hear pepperoni, you think pizza. But what pops into your head when you think of Pennsylvania? The Liberty Bell, Rocky, maybe cheesesteaks? Well, how about mushrooms? Tucked away in the southeastern corner of the state, just a stone’s throw from Pittsburgh and Baltimore, lies Kennett Square, the official Mushroom Capital of the World.

How did a quaint hamlet in Chester County earn such a lofty moniker? There were no bloody battles fought nor lands dominated—the folks there just found something they were good at and learned to do it very well. Lou Caputo, co-owner of Kennett Square Specialties (KSS), has been around the mushroom biz since the 1950s, beginning as a young mudslinger on a relative’s farm. He grew to learn, appreciate and understand all aspects of the mushroom, from growth to taste and preparation. Now Kennett Square provides 500 million pounds of mushrooms to the entire world, accounting for half of the United States’ mushroom crop. Caputo planted himself in the Chef’s Corner to divulge some of his secrets and best practices for our favorite fungi.

PMQ: How did you get started in mushrooms?

Caputo: I’m a fourth-generation exotic mushroom farmer. I started on my uncle’s mushroom farm in the ’50s. He needed someone to water the horse manure and straw coming in from the racetracks and fields, and, at 10½ years old, I was the man! That was my first job, and it’s been mushrooms ever since.

PMQ: How did Kennett Square become the Mushroom Capital of the World?

Caputo: The story goes that J.B. Swain was the first one to try to grow and sustain a mushroom here. We had access to all of the raw materials needed for growing, such as hay and straw from the fields in the area and the horse manure from the tracks and stables nearby. We used to get cocoa shells from the Hershey Company. We also had things like cottonseed hulls, corn flour and cottonseed meal coming up on rail from the South. Basically, it started in Kennett Square and remained in Kennett Square.

PMQ: I hear you had a hand in revolutionizing the mushroom market in the 1980s.

Caputo: In ’88, the U.S. market was getting overrun by Chinese exotic mushrooms. To combat that incursion, we sat down and got the portobello on the map for grocery stores. We started preslicing them and making them appealing to the eye for the shopper. A portobello, in its natural state, is not as pretty as you may think. The convenience and beauty of the new product brought a big boom to that market but also helped U.S. mushrooms in general. That era got KSS involved in more exotic types of mushrooms. 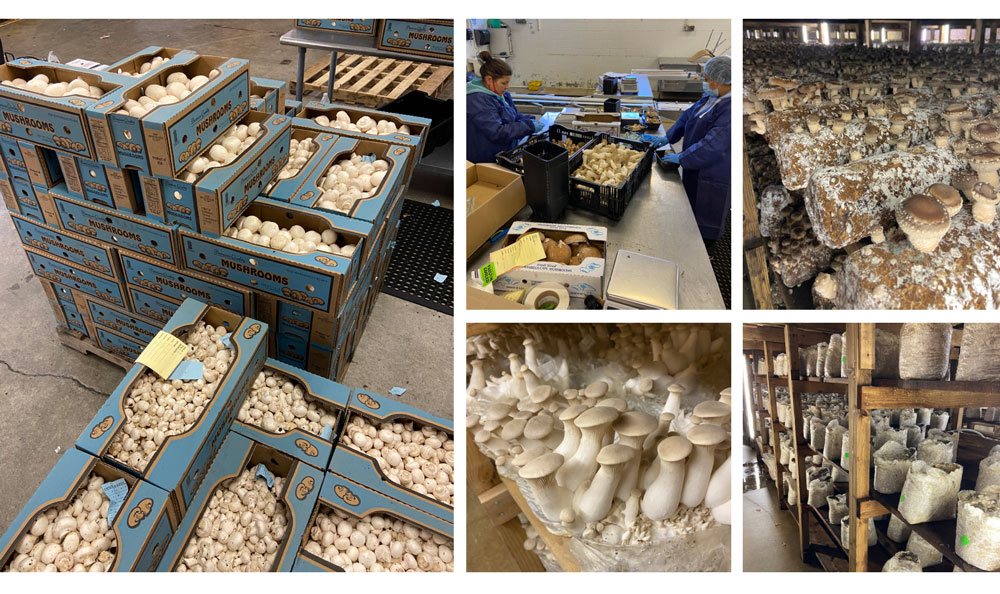 PMQ: What about the concerns folks have about a product being grown in manure?

Caputo: That’s kind of a fairy tale. Yes, part of the growing stage for some mushrooms involves that substrate—your white button mushrooms, brown buttons (cremini) and your portobellos. But most of the exotic types are grown in other substrates, like oak sawdust, millet grain and bran, chopped cotton hulls and chopped straw. We produce about 10 different varieties at KSS as well as a nonedible medicinal mushroom for the medical industry.

PMQ: Let’s explore some tips on mushroom flavor and prep. What about shiitake mushrooms?

Caputo: It’s a real woodsy mushroom. You should never eat the stem. Just use the cap. It can be marinated, grilled, sliced or sauteed and goes great with steak or fish. It pairs with a number of sauces.

PMQ: What about grey oyster mushrooms?

Caputo: It’s a very delicate mushroom with a very distinctive taste. It has one of the shortest shelf lives of any mushroom. It should be prepared with delicate dishes—nothing with an overbearing sauce. Try an oil- or light wine-based sauce. Oysters have a great habit of being able to absorb a flavor and pass it on.

PMQ: What about maitake mushrooms?

Caputo: Maitake mushrooms are high in fiber and vitamin D. It is such a versatile mushroom that it will take on any flavor you cook it with. Properly prepared, it can also create a cancer-fighting compound called D-fraction. It’s my favorite edible mushroom, with natural medicinal affects! 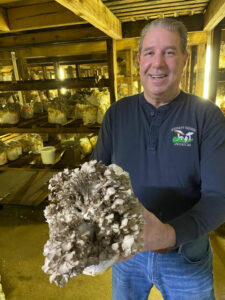 PMQ: People say mushrooms are difficult to work with. What are your thoughts?

Caputo: Mushrooms are not a complete mystery. You can figure out preparation for most of them with three things: salt, pepper and butter. Do that, and they’ll give up most of their secrets. Sautéed, boiled or fried, you’ll have to ask the mushroom how it wants to be treated.

Caputo: Par-blanching or sautéing. If you put one layer of mushrooms in a pan, they will sauté. If you stack your layers, they’ll create their own standing moisture, and now you’re boiling them, and you’ll get a less than desirable texture. You have to watch how much moisture a mushroom can bring to your pie during the bake. I like to sauté them. If you do it right, you can get a light singe around the edges. You can’t get that from a boiled mushroom.

PMQ: Most people who don’t like mushrooms complain about the texture. What’s your answer to that?

Caputo: You can change the texture of mushrooms during cooking. Through different oil levels, temps and cooking times, you can completely change the mouthfeel of any mushroom.

PMQ: What’s your best tip for storing a fresh mushroom?

Caputo: Never, ever freeze a raw mushroom. Either parboil it, sauté it or bake it, but never freeze a fresh, raw mushroom. Mushrooms have a lot of internal moisture. You need to remedy the moisture problem in your preparation or actual cooking. Never put mushrooms in a sealed plastic bag. Store mushrooms in your refrigerator in a brown paper bag or a plastic or glass bowl with a damp towel on top. That mushroom has to breathe. If it can’t, it will have a very short shelf life. I rarely use raw mushrooms for anything. I like to either parboil or sauté them.

PMQ: What are some of your favorite mushroom pizza flavors?

Caputo: I like to take five or six varieties and chop them up. Sauté them in olive oil, salt and pepper. Put that on a regular red-sauce pizza with cheese and make a Mushroom Lovers. I would also suggest a white pizza, topped with garlic, shrimp and maitake, all sautéed up, added to the pie and cheesed with a good mozz. But one of my all-time favorites is a blackened portobello and chicken Alfredo pizza. Also, these combos lean more toward healthy. Flavor it however you want, but it’s a healthier pie with mushrooms.

PMQ: Any last thoughts on mushrooms?

Caputo: They can be whatever you need them to be. Mushrooms are very adaptable. The king oyster is known as the vegan scallop. It takes on the scallop flavor as well as texture. The pom pom, also known as the lion’s mane, is the vegan substitute for crab meat. So it all depends on the preparations and flavors you use, but mushrooms are always a healthy choice. They are highly adaptable to any menu, be it regular or even vegan.

PMQ: So, just to reiterate…why mushrooms?