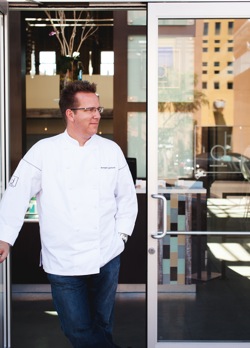 “We are extremely excited to have Chef Gerhard be a part of our presence at this year’s NRA,” said Marco Casol, president and CEO of PreGel AMERICA. “Chef Gerhard brings a wealth of knowledge and personality to everything he does in the world of desserts, and it was a natural fit to bring him on to emcee the demonstrations at our booth.”
The company will offer 12 different scheduled demos each day at designated Gelato Demonstration and Pastry Demonstration Stations at its booth for attendees to learn the latest in pastry and frozen desserts. Chef Gerhard will emcee each of the demos and also be on-hand to answer questions and meet with attendees. Schedules for the demonstrations are posted on the company’s website and will be available at show site.
This is not the first time PreGel and Chef Gerhard have come together for an industry event. Chef Gerhard is also the emcee of the StarChefs,com International Pastry Competition which is sponsored by PreGel. This will be the fourth year for the competition.
To learn more about PreGel’s presence at NRA, visit the company’s website www.pregelamerica.com or contact events@pregelamerica.com.

###
About PreGel AMERICA
PreGel AMERICA is the U.S. subsidiary of PreGel, a global ingredient company headquartered in Reggio Emilia, Italy. PreGel develops, manufactures and distributes ingredients, toppings and fillings of the highest quality from Italy, including flavors, powders and pastes used in gelato, frozen yogurt, pastry and other specialty desserts. Based in North Carolina since 2002, PreGel’s clients include restaurants, gelato cafes, coffee shops, patisseries, frozen yogurt shops, bakeries, pizzerias, hotels, resorts, grocery stores and universities, as well as a few distributors in the United States. PreGel believes in blending Your Passion with Our Ingredients. For more information, visit www.pregelamerica.com.

About Keegan Gerhard
Keegan Gerhard is the Chef and Owner of D Bar Desserts in Denver, CO, and D Bar Restaurant in Hillcrest, San Diego. Known for both his innovative desserts and savory classics, Gerhard has made a name for himself through his wealth of experience and abundant competitive energy in his position as Chef and Owner at D Bar. Gerhard, named one of the nation’s top 10 pastry chefs of 2002 and 2004 by both Chocolatier and Pastry Arts & Design magazines, brings an enthusiastic yet controlled approach to pastries. Gerhard is perhaps best known for numerous TV appearances. Chef Gerhard has been featured on shows such as the Discovery Channel’s “Great Chefs of America,”  CNN, HGTV, DIY and most notably as Host and Head Judge of Food Network's Food Network Challenge and Last Cake Standing series.