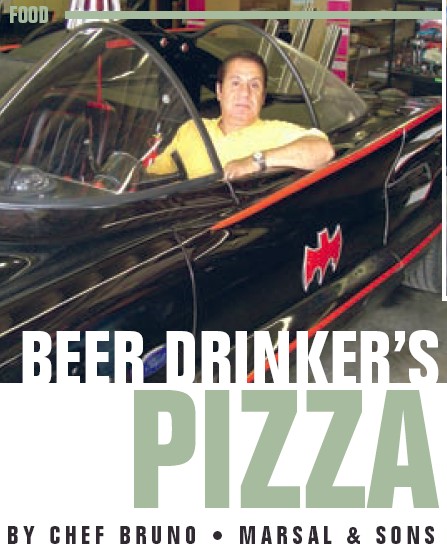 I hope everyone is having a great summer, but we all know that summer months can be a slow time for some pizza operators. It's a time when you want to kick back and sip on a beer in the shade, but rather than drinking the beer, you can also use it to make a tasty pizza. That's what I want to talk about today…a new type of pizza.

You know I like to experiment and try new types of pizza when I have some extra time. When it comes to beer, it's great for washing down a great pizza or other food, but it's also great for cooking. If you are a chef, you probably already know that beer can make many great dishes, such as chicken, steaks and sausages. Let's talk about my new finding that I call the Beer Drinkers' Pizza.

The idea came to me while I was making some experimental pizzas and my brain started to tingle. No, it wasn't tingling because I had drunk a six-pack of beer, but because I was thinking about the yeast-like beer taste some pizza have. I didn't like my attempt, but like I have said before, you have to experiment until you get something that works. On the second try I was getting better, but the third attempt was the one. I made two pizzas and let my customers try them. When you are experimenting with prototype pizzas, the best way to find out if you have a winner is to go out in your restaurant and talk to your customers and offer them your dish to sample. Tell them you value their opinion and want to know what they think. It makes them feel special and in most cases, makes them a long-term customer. With my Beer Drinkers' Pizza, eight out of ten customers said they really liked it, so maybe it can be a winner for you. Try it out, experiment a little and see what you can come up with. Enjoy.

Combine in a large bowl: warm beer, two tablespoons of olive oil, sugar, salt and _ cup of flour. Beat until smooth, stirring in enough flour until the dough is fairly stiff.

Turn dough out onto lightly floured surface and knead until smooth and elastic (about five minutes). Place dough in a greased bowl, turning once to grease top, cover and let rise in a warm place until double in bulk (about one hour).

Punch down the dough for two small pizza, divide in half. Suing two tablespoons of oil, coat a 14-inch round, deep pizza pan or use two nine-inch cake pans. Sprinkle with cornmeal, pat dough into pan, pinching up a rim around the edges. Cover and let rise in a warm place until double in bulk (about one hour).

Bake at 450 degrees F for 15 to 20 minutes or until crust is browned and sausage is cooked.